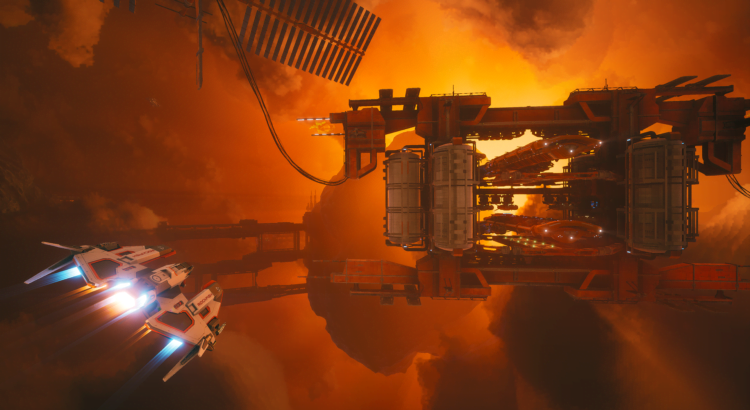 It hasn’t been that long since I last saw Everspace 2. I took a brief look at it at PAX West, and it’s since launched a Kickstarter that’s almost reached its goal. Back then I got a hands-off demo that looked good, and I’ve since gotten a chance to play around with an early build myself. Having actually played some now, I can confidently say it looks promising.

Everspace 2 trades the rougelike foundation of its predecessor for a more traditional model. The world is persistent this time around, with a greater emphasis on story. It’s also very big. Each of the zones I had access to were massive, effectively capturing the feeling of exploring the vastness of space. There’s a lot of… space to cover in each area, feeling seemingly infinite in terms of how far you can fly out into the horizon. While not present in the demo, the full game will let you visit planets as well as let you fly around on them.

Despite the game’s galaxy being split up into discrete areas, moving between each one feels pretty seamless, each area loading extremely quickly even in this early state. You move between zones via warp drive, which you can either let play out in real-time (it only takes like… minute or two at most) or just skip. If you don’t skip it, though, you get to see one of the more interesting parts of travel: that you can be attacked mid-flight. 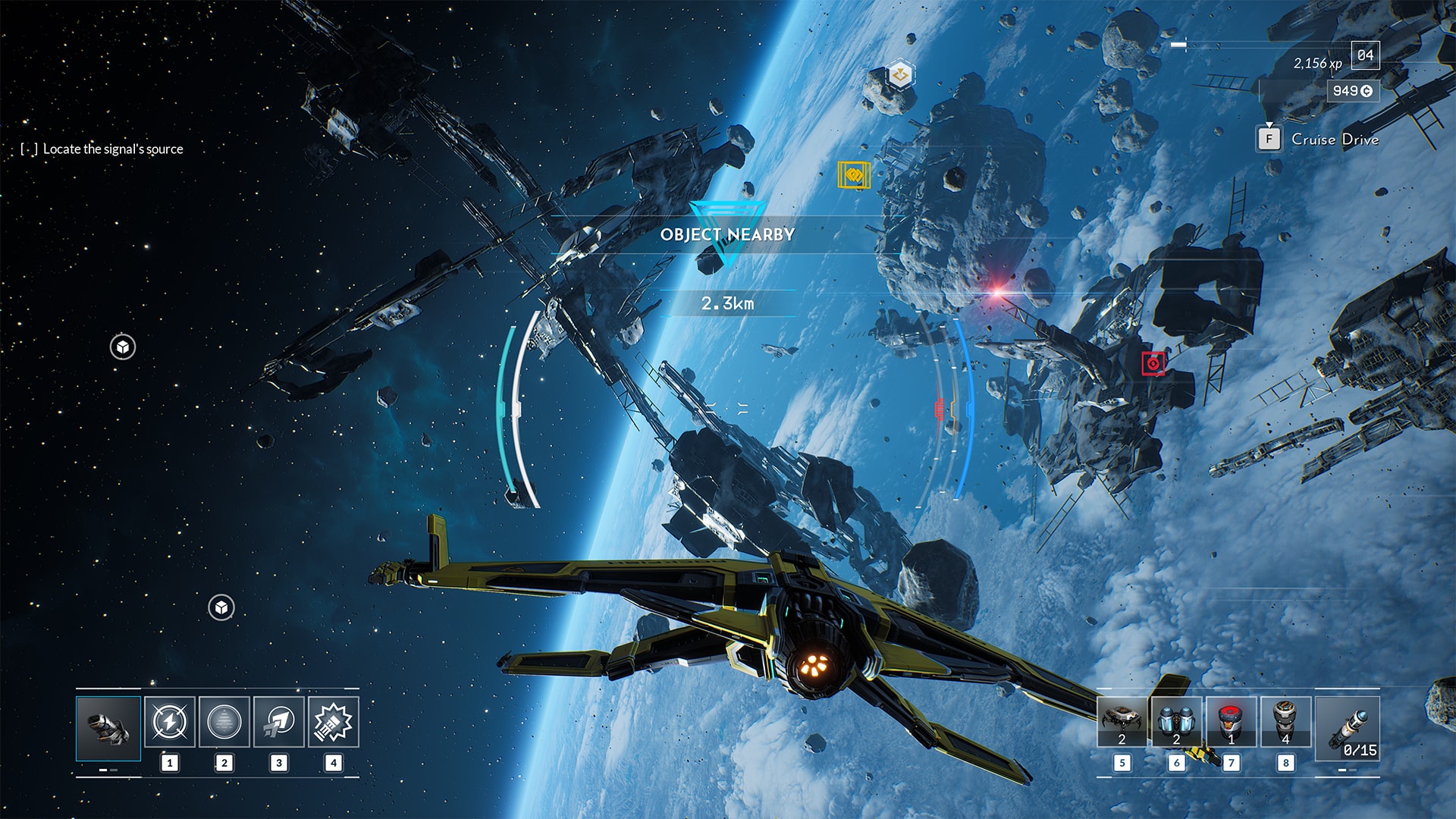 First time I tried heading to a different zone, I put my controller down and checked my phone to kill time. Next thing I know, I’m suddenly stopped and getting hit. A couple of drones had somehow targeted me. Hardly much of a threat on their own, but an annoyance all the same. I take them down quickly. Didn’t realize I’d been knocked out of warp travel at first, leaving me floating in space remarking on how little there was at my destination. There’s usually a bunch of markers around to point you toward mining deposits, stray items or general points of interest. Out here, between zones, nothing but a great view of all the planets surrounding me. Soon enough I figure out what happened and get back on course.

At my destination I’m greeted by a massive fleet moving through the area embroiled in multiple skirmishes. I try to move to help, but I’m not able to get anywhere close before they finish off their attackers. Instead I’m able to answer a request for help from scientists. They’re apparently studying the nearby sun and their equipment needs to be realigned to help their research. They promise a hefty reward for assisting them. The mission’s easy enough: just fly to some waypoints to adjust some solar panels. Simple stuff. Only, by the time I finish, the scientists are long gone. They already ruled the research to be worthless, so I get a tiny sum of cash instead of the proper reward they promised. Least the view is nice.

Next stop leads me to the wreckage of a massive ship. A distress signal is broadcasting in the area, which I’m prompted to investigate. The sole survivor of the shipwreck is stranded inside an escape pod and needs help. The exact location is pointed to me via a waypoint like most other objectives have been up till now, but instead via a pop-up gauging how far I am from it. Takes some time for me to find, but I eventually track him down. I pick up the escape pod and transport it to the nearest station. As thanks, I’m given some new gear for my ship — which serves as a good reminder to check my inventory.

Everspace 2 is all about loot. Most everything on your ship can be swapped out with higher quality components. The stats are random, partially determined by the item’s rarity level. If it’s rare or better, it’s assuredly better than any common stuff. Any unwanted gear or general junk you pick up can be sold off for cash, which can then be used to just buy better weapons and shields and whatnot if you don’t want to wait for the right drop to appear.

My last stop drops me near an especially large station. After flying around a bit to to check out my surroundings, I stop by to offload some spare materials. Before I can do that, though, I’m given a job to help fix some leaks. Apparently the station is down a few folks. I sell off some stuff and head off to find those leaks. Like the other missions so far, it’s easily taken care of. Immediately after, however, a bunch of enemies start swarming the area, leading me on a chase to track them down and get rid of them. 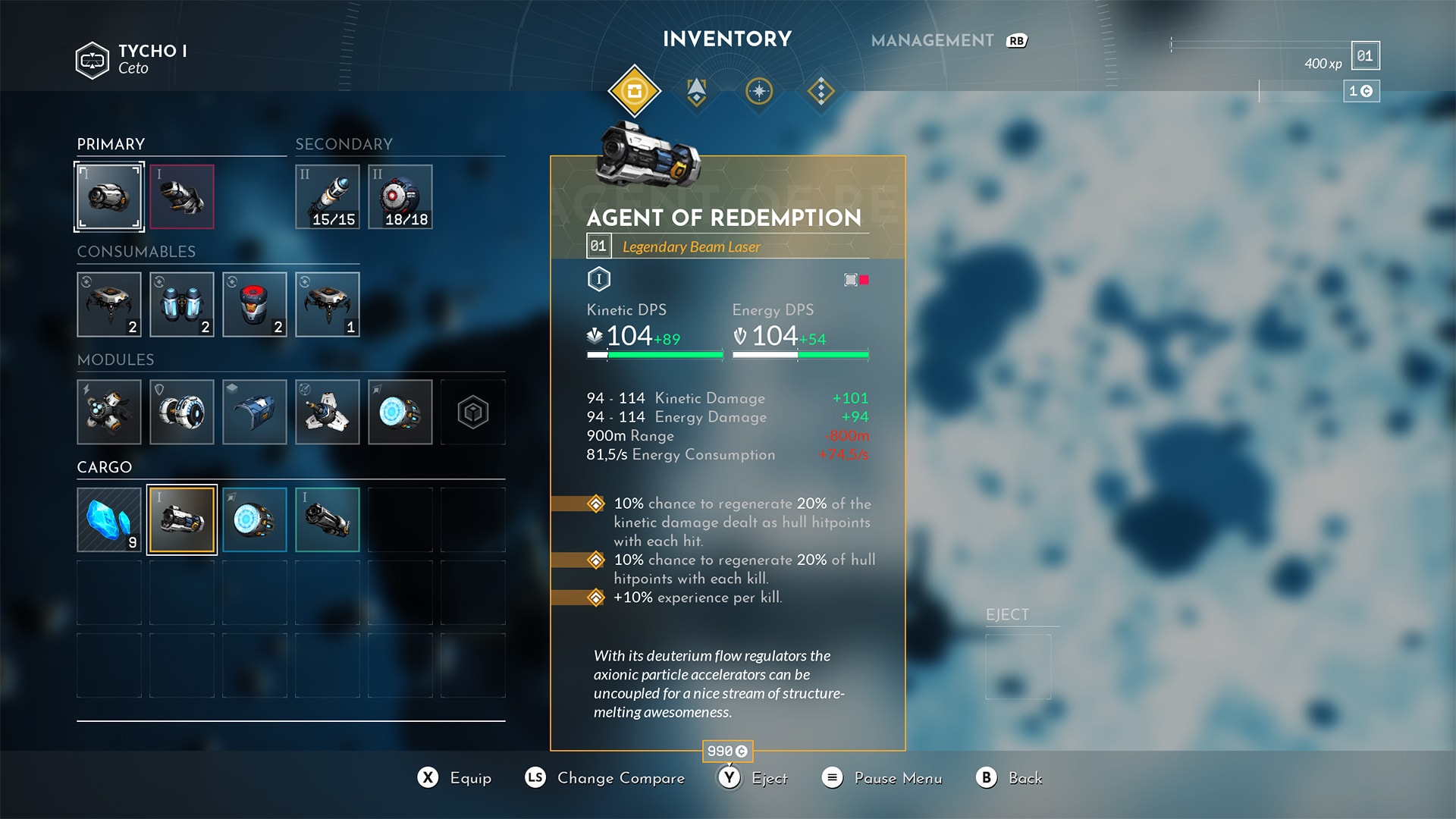 I hadn’t engaged in much combat up till now, so this mission provided the perfect shot for some proper prolonged combat experience. Fights are relatively straightforward, but thrilling. Just point your crosshairs somewhere in the vicinity of your target (the game has a very wide and generous auto-aim) and open fire. Simple enough on paper, but surprisingly tricky when your targets keep zooming around swiftly. My weapons are fast enough to catch them when I’ve got my sights lined up, but it’s easier to fight at a bit of a distance so I can actually maneuver while opening fire. The enemies I’m faced with prefer to get in nice and close, of course, so I have to make due.

With the area clear, I have to patch up a few more holes that may or may not have been caused by me in the middle of fighting before I can get my reward. All that’s left afterward is checking out a big warp gate. For the purpose of the demo, its status is “unavailable,” but that doesn’t stop a massive battleship from coming through, fighters in tow. Out of everything I’ve fought, this ship is definitely the most difficult. Mostly because it’s far more hardy than most of the other foes I’ve encountered.

Having not played the original Everspace, I can’t speak to how the sequel compares to the first game. But based on my experience with Everspace 2, I’d say it’s looking good. The game’s still a long ways off with a launch in Steam Early Access set for next year, and a full release currently targeting sometime in 2021.