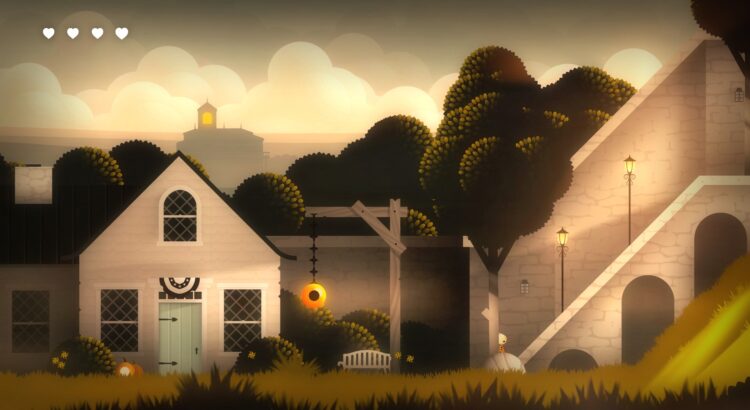 I’ve never really played that many Medroidvania-style games, as I grew up a predominantly PC gamer and there was never a console in the house when I was a kid. Indeed, I only got my first console in my 20s. I’ve certainly played games of the style since then, but I’ve always felt like I’ve had a bit of a blind spot in that area as I’ve never really played a Castlevania or indeed a Metroid. Neversong certainly helps to fill in that gap quite a bit, and does it with great style along the way. Neversong (originally titled Once Upon a Coma) is an uprezzed reimagining of Thomas Brush of Atmos Games’ 2009 flash game Coma, expanding on the original game in numerous ways.

Neversong’s story focuses on Peet, a young orphan boy who is alone in the world save for his friendship with a young girl, Wren. Peet and Wren develop a strong friendship, but then Wren is suddenly kidnapped by the skull-like visage of Dr. Smile. The trauma of this event causes Peet to fall into a coma, and when he awakens he discovers all of the adults in his hometown of Red Wind Village have gone missing, supposedly while searching for Wren. The children of the village have been left to wander, and it’s up to Peet to track down the kids, save Wren and restore order. The story is pretty good, keeping you invested in the world and the characters. A large part of this comes from the excellent voice acting, giving side characters like Gomboyssa and Preston lots of personality and extra charm. The game is fairly short, but certainly uses the time it has available to full effect.

Neversong is an interesting mix of some of the gameplay elements Hollow Night merged with the creepy, twisted aesthetic The Binding of Isaac and some story elements more typically found in point-and-click adventure games. Most of the gameplay involves navigating Peet around some gorgeous 2D environments, platforming over obstacles, talking to characters, killing enemies and solving some light puzzles. Combat is pretty simplistic and only really has one style attack, but it still feels satisfyingly weighty. While controls are straightforward on a gamepad, its best avoided using a keyboard. That said, enemies sometimes have a tendency to damage Peet even when you think they’re far enough away that their attacks would miss. There are several boss fights of varying difficulty, but nothing too onerous. Most of them involve waiting for the boss to reveal their weak point before attacking and repeating. Peet slowly gains new abilities as you play, allowing you to access previously inaccessible areas of the environment, a true staple of Metroidvania’s.

The real satisfaction comes from seeing the wide variety of different environments the game sports, all of which are astoundingly pretty. From the charming village of Red Wind to the crumbling ruins of the Blackford Asylum, every space feels unique and aesthetically different. The highly fluid animation on characters and enemies combined with the excellent visuals really succeed in bringing you into the world. Similarly, the soundtrack is superbly atmospheric, with a mixture of moodily brooding and quaintly upbeat tunes to suit the different locations.

Neversong doesn’t do anything incredibly different from games before it, but everything it does do it pulls off excellently. Although short, it doesn’t do anything to negatively pad out the game unnecessarily, meaning what you’re left with all feels worthwhile. The setting, music and gameplay combine to create a memorably short poignant experience. If you’re looking for a satisfying action-platformer with an interestingly melancholic story, Neversong is an ideal candidate.