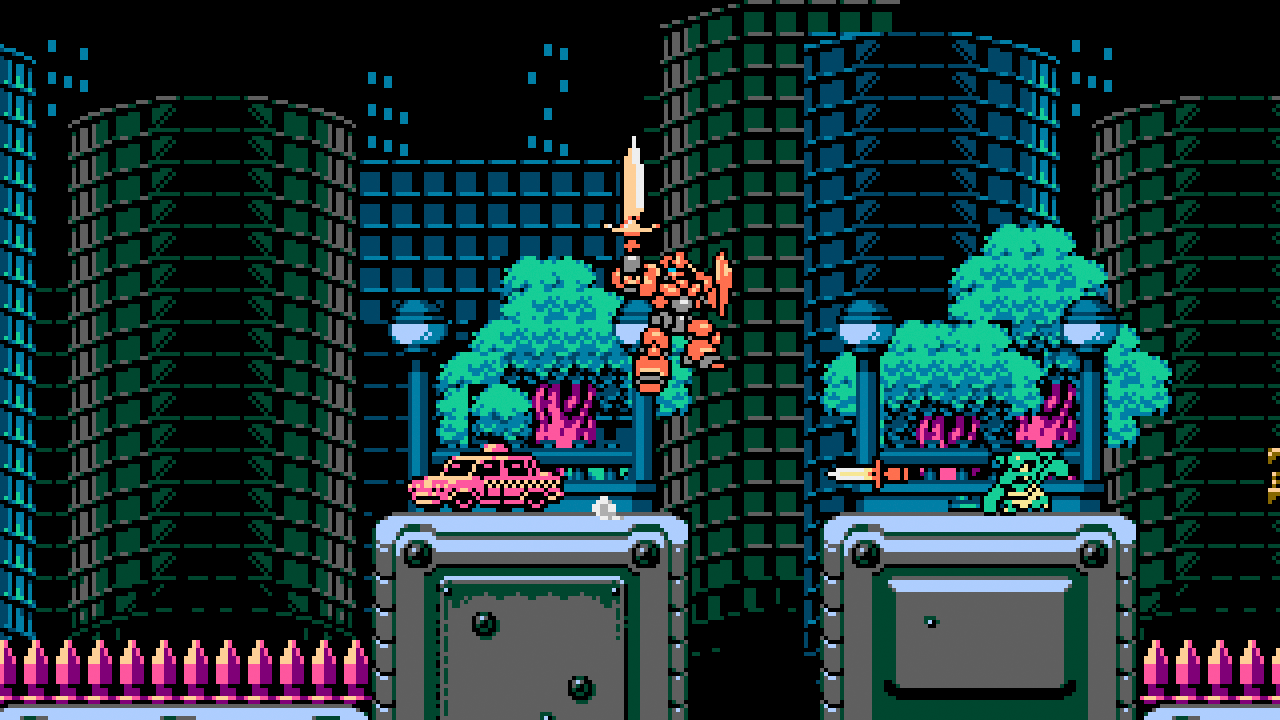 There’s no two ways about it: the NES provided some of the best platformers ever, with many examples of how good game design ages well. While you might call some classics cheap in the way they provide challenges, such as Ninja Gaiden’s infamous physics and enemy placement, nobody can deny their influence in today’s videogames, especially in the independent scene.

By far the biggest design philosophy that developers love to go for in their games is having players go through the motions that made the Metroid and post Symphony of the Night Castlevania games so beloved, that is, acquiring new skills as they play and putting them to use in exploring the map further.

Those ideas are fine and dandy and managed to provide some excellent games in their own right, but my favorite style is the one that stuff like Mega Man and the classic Disney NES games like DuckTales and Darkwing Duck to name a few went for back in the day: platforming bliss it’s how I like to call it.

And that’s something that Tribute Games’ Panzer Paladin absolutely nails. From top to bottom it’s a game that’s not at all shy about wearing its influences and going for something totally nostalgic but at the same time original and a whole lot of fun.

Playing as the duo of cybernetic crime fighters Flame and GRIT, your mission in Panzer Paladin is to rid the world of an invading demon horde dropping in from space that’s causing all sorts of trouble in different corners of the world. GRIT is a big ol’ mecha that Flame pilots and kicks the absolute shit out of enemies in true 1980s anime glory, complete with a set of colleagues that chime in between missions via truly awesome pixelated cutscenes complete with cheesy lines and poses.

Panzer Paladin’s structure should be familiar to anyone who’s played any of the games that I mentioned from that time period, where you are able to pick whatever level order you want out of a list spread across a map. Each location comes with its own Weapon Keeper (aka boss) fight at the end and is quite varied in composition. Some bosses are more straightforward and don’t require as much finesse in how you traverse them, while others throw in some tricky gimmicks that make them a little tougher than the rest, like quick jumping sequences that demand a lot of finger dexterity.

GRIT is surprisingly nimble as it can dodge backwards and not only attack with forward thrusts, but with upwards and downwards slashes that can be put to use not only offensively, as they’re really useful in order to get around the platforming too. GRIT can even parry attacks if you time your own correctly, staggering and even disarming some foes. If at any point GRIT runs out of HP, Flame jumps out and can make use of special hooks to swing herself from and dish some damage of her own with a really powerful whip, at the expense of defense since she’ll only take a few hits before going down herself. You can also have her pop out if needed in order to get past sections that GRIT won’t fit into which generally end up in a HP refilling station for her mecha.

The biggest thing Panzer Paladin has got going for it, however, is how it deals with power-ups. GRIT can equip any weapon that they can find along the way, whether it’s an enemy drop or a random pick up, each sporting its own set of stats like power, speed, and durability, but most importantly, each weapon provides a bonus spell that can be used if instead of using it until it breaks you break it purposefully in order to release that power. These skills vary pretty wildly from weapon to weapon, some might merely cure you some while others are active buffs that last for a few moments. Even without a weapon in hand, GRIT is still a perfectly capable fighter, but severely limited in range and power as its only means of attacking is with its fists.

Since Panzer Paladin does not offer any form of health pickups outside of these spells and out of the way recharge stations where you have to leave the safety of GRIT’s frame as Flame in order to procure, it’s a good idea to balance out when to use healing and even other boosts as they come in handy especially during boss encounters. It’s also a good idea to keep even the weaker weapons around because you can use them to activate checkpoints that pop up around the half way through levels and right before a boss fight, or if you want to make things interesting, forgo any of that Shovel Knight-style.

Weapons also come into play when you stop by the lab while in the mission select menu. You can burn extras that you grab while playing in order to increase GRIT’s life bar. Since you can only carry four weapons at once during levels, any of them that you pick up after maxing out will go to your locker, and even if you quit back to level select without beating a stage, you’ll keep whatever you got during that run, making it easy to quickly grind these out if needed.

Difficulty-wise, Panzer Paladin ranges somewhat as some levels can be way tougher than others, not to mention boss fights being slightly trickier to beat, but I’ve yet to run into a section of the game I considered frustrating. From start to middle point save spot in stages is usually a longer stretch than your usual action platformer for sure, but since the platforming is such a blast, I was never bothered with having to replay a level from the beginning if I happened to run out of lives. You can also change the difficulty from the map screen if you wish to spice things up or dial them back a notch.

There are a few extra worthwhile modes to play too. Blacksmith Mode offers a really neat weapons creation suite for you to build your own custom sprites and share them with other players as they will pop up in their games. This includes stats and types as well, so you can pick from any of the three weapon categories (slashing, blunt, or stabbing) and put in a certain number of points into every stat as you want. Keep an eye out for my special cotton rub spear, it’s really stupid!

Then comes Speedrun Mode, which speaks for itself. You’ll be able to replay any of the levels you’ve beat in the main game in order to try and finish them as fast as you can for all the leaderboard glory you can take. In that same vein, Tournament Mode comes after you beat Panzer Paladin for the first time and it’s a series of boss fights that you have to face in order to possibly register your name in the annals of online history as the best mecha pilot around. Or not, if you’re anything like me. Along with Tournament Mode, Remixed is also included after finishing your adventure and is another reason to replay the game by changing levels up and including new twists to them.

The team over at Tribute Games have an incredible sense of art direction as Flinthook and Mercenary Kings already proved in the past, and Panzer Paladin is no different with lots of parallax scrolling going on over the background, as well as some really beautiful 8-bit sprite work. I could’ve done with a little more variety when it came to enemies in specific regions of the world as they tend to repeat a bit too often when it comes to the more fodder ones, but the entire visual package is still a real treat. Same goes for the soundtrack which is a blast to listen to, with lots of metal tracks that fit with the gameplay perfectly.

Retro-inspired games are a dime a dozen these days, and even so Panzer Paladin manages to set itself apart from the pack by offering a unique gameplay twist, extreme quality platforming, and a really cool anime aesthetic that you would be really remiss for overlooking. If you’re in the market for a great game to play with a decent amount of challenge, Panzer Paladin is a fantastic option on Nintendo Switch and PC (Steam).