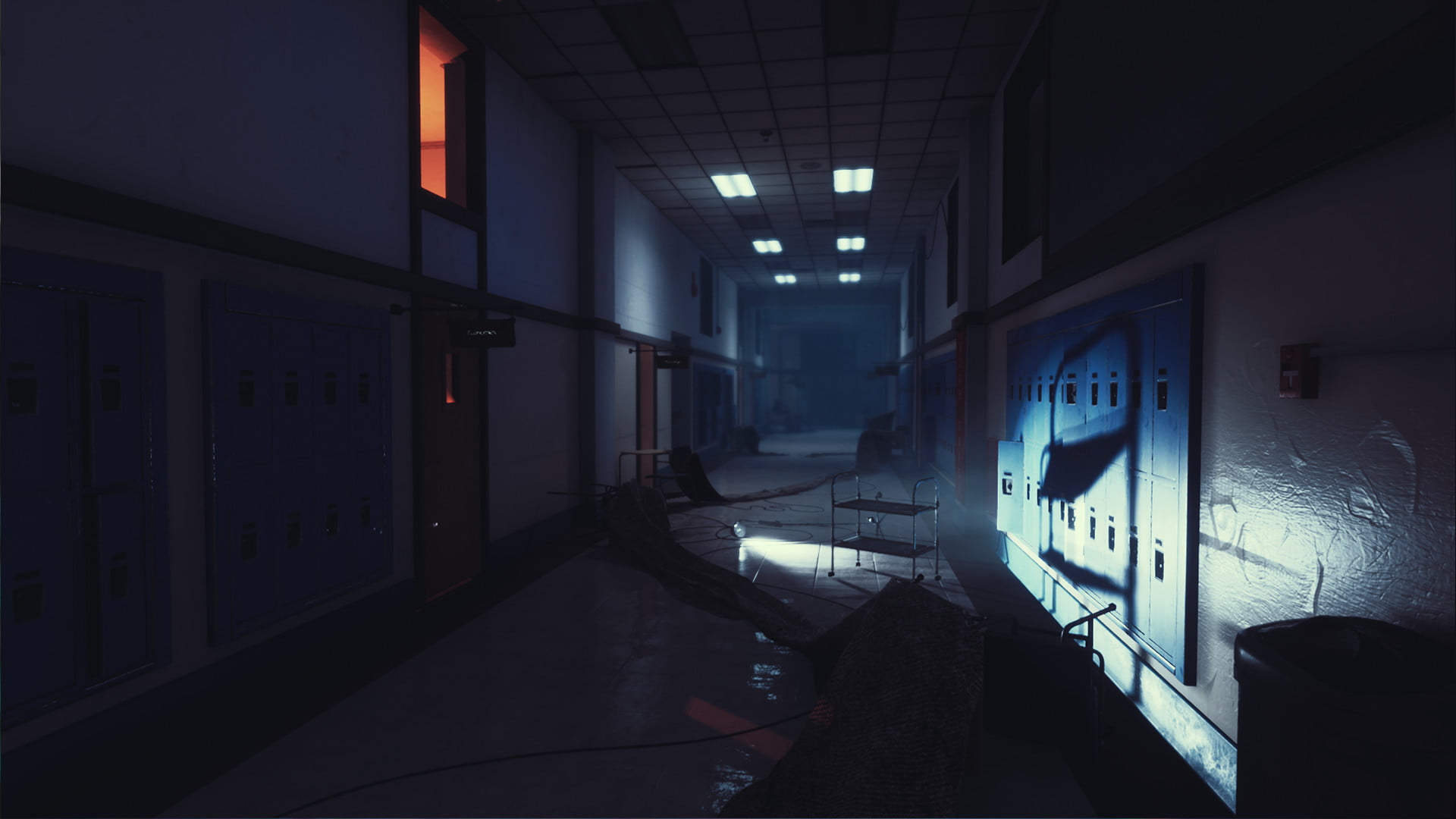 Your auspicious entry into the world of What Happened begins in a dimly lit hallway, filled with doors. Each door has vague labels over the top of each that you must decipher to actually get into the game, stuff like New Game, Continue, Options, and Exit. Entering the New Game room presents you with a toilet, which you must flush to get started. Down the drain you go, and you wake up as a not so typical teen, sitting on the toilet, in what is perhaps one of the most terrifying settings in any narrative, that being a high school.

It’s worth noting that before the game starts, there is a lengthy warning about epileptic seizures due to flashing color patterns. This is important, because these flashing color patterns are seen often as you progress through the game. They seem to be a factor when Stiles gets triggered, that is, experiences a psychological episode. These can range from shorter duration episodes, such as early on in the game when bumping into other students in the hall, to longer episodes where the flashing colors can last for several minutes or even become a constant presence, such as when Stiles’ real world fades into the background. It adds to the psychological immersion, but ultimately becomes a distracting element in the game.

Speaking of immersion, you control Stiles using the two analog sticks. You also pull and push objects such as doors and light switches by holding down the right button and pushing up or down on the right stick. It feels a bit unconventional at first, but it does seem to simulate the feel of pushing doors open or pulling cords on light switches, if only marginally so.

After what seems to be an obsessive amount of time on the toilet, much of which is spent trying to decipher various messages written one the walls, you escape your porcelain-adorned cell, only to be introduced to the early game’s antagonist Jimmy. Jimmy wastes no time in knocking you on your butt with a mean left hook. He must play Punch-Out between classes.

After leaving the restroom, a large portion of the high school becomes accessible, including a variety of classrooms, where Stiles will automatically interact with certain objects, such as eating sandwiches or apples. You can also manually search various drawers, file cabinets and cupboards, though the results aren’t terribly exciting.

“They don’t see me, so I don’t see them,” Stiles rationalizes, early on, about his fellow classmates, who also happen to be traversing the halls, minus their physical bodies and if this isn’t one of the most apt descriptions of a common feeling among high schoolers, then we don’t know what is. It’s interesting to note that whenever Stiles bumps into one of his invisible peers, that it triggers a mini psychological, almost dissociative experience, accompanied by flashing colors and a bit of slowdown. This is accompanied by a bit of dialogue from both Stiles and the person you bumped into.

What’s also interesting is that Stiles himself serves as both protagonist and antagonist, the more reality based version of Stiles that loiters the halls, gets beat up by alpha-male-in-training Jimmy, and spirals downward into a drug addiction fueled loneliness seems very at odds with the Stiles that’s living inside his head.

Cerebral Antagonist Stiles advocates for suicide, suggests that Stiles’ friends weren’t really his friends anyway, and generally seems to make things more unpleasant for Stiles. Most likely a product of his drug use combined with his excessive loneliness, Cerebral Antagonist Stiles seems to have harsh opinions about pretty much everything, from his classmates, “f-ing pricks,” to butterflies, “look at them, taking over the f-ing place,” to Stiles’ girlfriend, “what did she ever do for you??”

The theory that Stiles is dissociating much of the time makes a lot more sense when you consider the interactions with his own antagonistic mind, and his frequent breaks with reality. While one could be tempted to argue that both of these could be a result of his drug use, early on, his friend Ben suggests Stiles, “was always like this,” and that Maya, “couldn’t see it because she loved him.” It seems more likely that Stiles’ psychological issues, causing him to dissociate, (and probably self-medicate with drugs) are longer lasting than his substance use issues.

The fact that Stiles is dissociating also makes sense when you consider that dissociation is often a symptom of previously experienced traumatic events, which could certainly be the case, given that as you progress further in the game, the events surrounding Stiles’ traumatic past come into focus more and the relationship between these events and what Stiles is experiencing now is more fully explored.

As Stiles spirals downward into a drug abuse induced state of perpetual anger, he pushes his best friends and fellow classmates, Ben and Maya away. This causes them to grow distant and want nothing to do with him, but also pushes them closer to each other. Of course, this only fuels Stiles’ feelings of loneliness and anger and despair.

The game itself, at least early on, is extremely vague about letting you know where you should be going or what exactly you should be doing. The developer addressed this in one of the more significant launch day updates, which also supposedly added more direction for players, saying this was to symbolize Stiles’ feelings of loneliness. While that may be true, a game like this, where many of the areas you’ll move through can be pretty abstract, could really benefit from having a clear sense of what you should be doing.

What Happened is at its best when it surrounds you in its psychological horror-esque environment, such as when Stiles finds himself alone in the school, the darkened hallways illuminated only by the periodic flashes of lightning outside, coming in between loud crashes of thunder and the soft, yet persistent raindrops on the windows and rooftop.  Eerie crimson colored lights peek out of some of the classrooms and opening these means confronting images and memories that Stiles would rather avoid.

What Happened is a very existential game, in that it deals with a variety of themes that are very common to the existence of many high school age teenagers, the subjects of love and loss, depression and self doubt, identity and conflict and emotion. It can be seen as a coming of age story too, of sorts, if you’re so inclined, mixed in with psychological angst.

What Happened deserves credit for trying to tackle all of these complicated  themes as well, such as substance abuse, suicidal ideation, past complex trauma, and psychological issues. These are themes that many forms of entertainment still shy away from, even though they are themes that are relatable to (and resonate with) so many of us.

The exploratory nature of the game makes it almost harken back to the point and click adventures of old, as there are a number of similarities at play here. One is the fact that even though much of the narrative is told in flashbacks and interspersed pseudo-reality scenes, to get the full scoop on what’s going on in Stiles’ head, you’ll have to find various class notes and journals, diaries and other written works littered about the school.

Also, with regards to the classic point and click games, many of the settings evolve over time as places are explored and narratives are pieced together. This is also the case in What Happened, where much of the action takes place inside the hallways and on the grounds of the high school, which constantly evolves over time, from reality to fantasy to abstract, seemingly based on Stiles’ current state of mind and what memories he’s currently experiencing.

Ultimately, What Happened is not a game for everyone. With its often abstract, constantly shifting narrative, to its potentially triggering, difficult themes, following Stiles on his journey is typically an exercise in patience. While it can provoke an interesting narrative in certain places, and some of the set pieces and design elements, such as the empty, darkened high school grounds in the midst of a thunderstorm, seem inspired by classic horror; perhaps the question of What Happened is best left to those who can endure it.