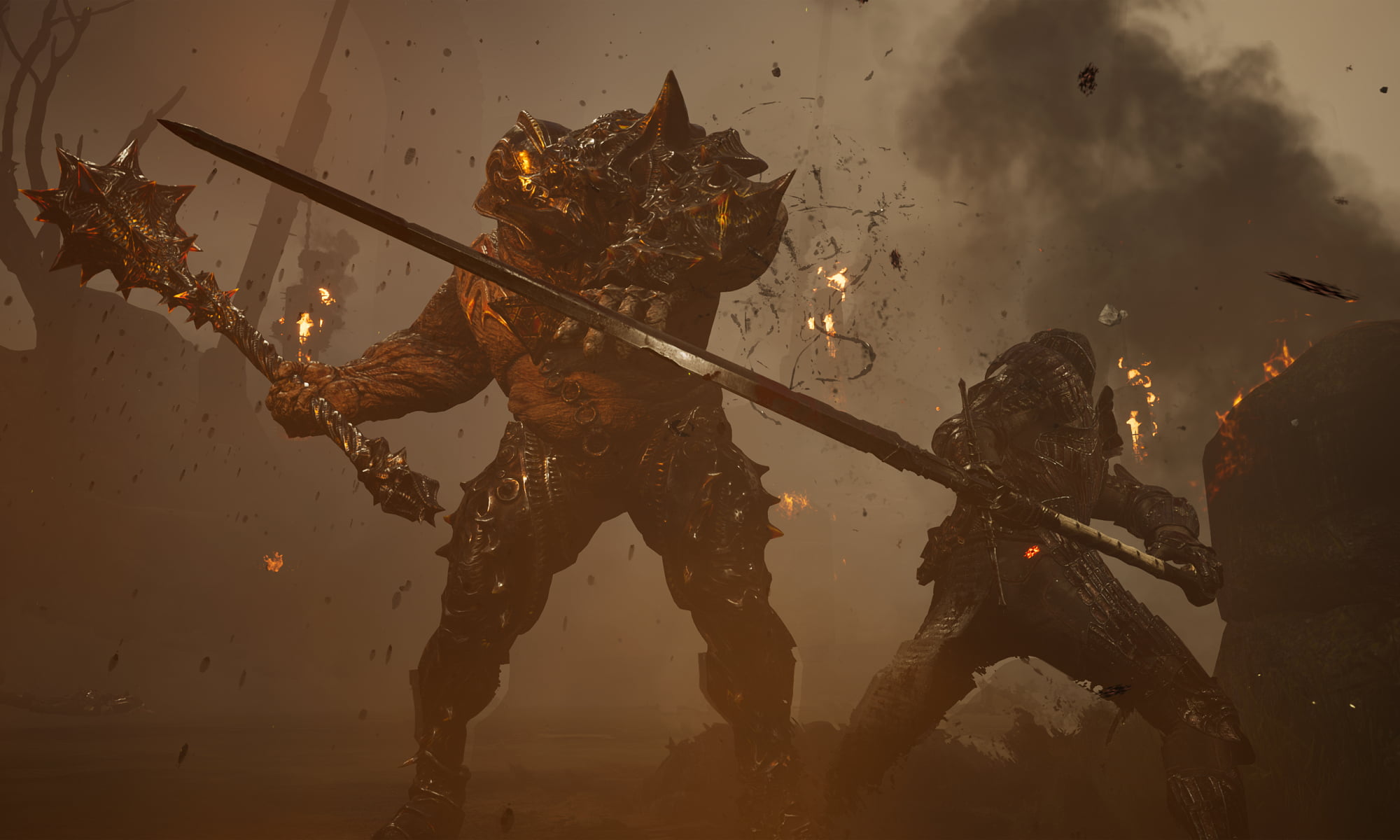 It’s nearly impossible to talk about modern gaming without touching upon the Souls games in some way. From Software’s now iconic and genre-defining series has been incredibly influential and for good reason: they’re some of the best gaming experiences you can have, period. So it comes as no surprise that many other developers have tried making their own brand of Souls games, and up to now, they’re had various degrees of success, whether it’s Team Ninja’s Nioh series, with its own flavor of ninja action in the mold of the From Formula, or even The Surge from Deck13, a brutal futuristic take of it, none have come too close to really emulating the feel of Souls.

That is, until Mortal Shell. Admittedly, at first glance during this year’s in lieu of E3 presentations, I wasn’t too impressed by the game at all: it looked way too much like Dark Souls, to a fault, which prompted me not to play its beta. Until I received review code for it, I hadn’t seen anything past the short demonstration that had aired weeks ago. Coming out of it having finished its campaign for the first time, I’m positively impressed. The small team over at Cold Symmetry wears that inspiration in Souls on their sleeve and have crafted a souls-like experience of the highest quality that is both very contained and unique, thanks to some mechanics that are true to its name.

The world of Mortal Shell is one of darkness and perpetual suffering called Fallgrim, where its inhabitants toil their existence in hopes of being saved somehow, or have been overcome by madness just wander about as poachers and bandits. As a wayward soul that’s taken the shape of a husk that’s barely human looking, you have the ability to inhabit a number of different shells that give you a variety of what you could call ‘builds’, as they used to be warriors who somehow fell during battle. At the outset, you can easily find one of these to start out, and over the course of exploring a few more become available, giving you plenty of flexibility as needed.

Gameplay is governed by three meters: the health bar, stamina, and resolve, the first two work pretty much exactly like what you’d see in Dark Souls, with stamina governing how many attacks you can perform or how much you can run and dodge before growing tired, while resolve comes into play when using each of the weapons’ special attack, and it refills as you land hits. The movement and dodging in the game is very close to Dark Souls, with the same focus on follow through animation and weight, as well as its cryptic approach to story delivery and ambiance, but it has plenty of its own twists that help set it apart.

Like the shells. Each of them has their own attributes, some favoring stamina over health or vice versa. They all have their own talent trees as well, wherein you spend tar, the game’s currency, on new skills, perks, and buffs. Glimpses, the second item needed for unlocking branches on the skill tree, are dropped by enemies sometimes as well as from consumables. They’re also used for another part of the play experience via an NPC.

Another part of combat in Mortal Shell that is unique is hardening. By pressing the left trigger, you can assume a statue-like state that absorbs the first hit on an enemy’s attack, allowing you to combo in a hit of your own for a counter, or simply protect yourself from a devastating hit. It can be used every few seconds and in conjunction with special items that can buff your character or even heal them if needed.

Hardening acts as an improvised shield of sorts since there are none to speak of in the game. Outside of the parry and riposte, the left side of the controller, which is usually reserved for defending in Dark Souls, is instead relegated to offensively protecting yourself in Mortal Shell, making its combat feel somewhat more aggressive than the former. It feels really good to pull off parries and ripostes in this game thanks to how damaging they can be, making it worth learning the timing of your chosen shell and really put the hurt on your opponents.

Whenever you “die” in combat, your husk pops out of the shell all Dr. Strange-like, with very little in the way of a HP bar until you run back into your shell for one last go, kind of like it was in Sekiro and its revival mechanic. Whenever that happens it’s a crazy race back to your body before you’re struck down during whatever jam you find yourself in, and if that indeed happens, you can only reclaim dropped currency and experience without the added benefit of a full heal which happens when you die a second time while within your shell.

Then again, the repeated dying and exploration of mechanics is a natural part of souls-like games, and it’s definitely present in Mortal Shell to an extent. Even with the hardening ability available from the very beginning, the game starts out relatively tough and grows exponentially more manageable the further you get into its 8 to 10-hour run time.

That’s mostly due to its relatively weak and slow starting sword and the general initial aimlessness of the gameplay. Item descriptions also don’t say what they do until you use them once, and they’re fairly expensive to obtain at the beginning, forcing you to scrounge up as much as you can of the local fungi in order to even heal since there’s no equivalent of the Estus Flask to quench your undead thirst with in this Mortal Shell.

After a couple of unsuccessful runs, though, the game clicks. You’ll start figuring out paths to objectives thanks to clever “visions” that you can access giving you vague tips on where you should be looking. And, most importantly, you’ll eventually discover more weapons to use that really help open up the game and make it way more fun, even more so once they’re upgraded at the hub areas’ anvil with special items.

You can find in each of Mortal Shell’s ‘temples’ that also hide valuable and highly coveted glands, what some believe are the key to escaping the living hell they’re trapped in the game. Those temples are limited dungeon areas within Fallgrim that dish most of Mortal Shell’s boss encounters after somewhat twisting mazes full of strong enemies and environmental puzzles to complete. The best of those is a beautifully eerie area that’s littered with monolithic stones that has you climb up what might seem to be infinite pathways. It has you extinguishing three braziers before the main path opens up, pushing you to explore the outside area before gaining access inside and to even more fights before you get to the boss.

Obviously that was the first piece of the game that I inadvertently faced — you can face any of the three in any order — still relatively ill-equipped and feeling lost until I accidentally discovered how to unlock the first of my new weapons and proceed to finally conquer the area, ripping the gland and claiming it as my prize.

The moments that follow beating a boss are some of Mortal Shell’s tensest as a deep fog engulfs its world until you deliver the gland back to the starting area. Not only is it hard to see your way back, but it’s littered with tougher enemies that guard previously inaccessible treasures all the way back to the hub area. There are pros and cons to sticking around when the fog is down, since the amount of tar you can get out of fights is noticeably higher than usual even though it’s way more dangerous to do so.

Mortal Shell is especially impressive given the limited size of its development team at Cold Symmetry and the amount of polish that it sports. Graphically it’s a very good looking game that ran without a hitch set on ‘high’ on my system configuration that’s nearing six years of age. The monolith area in particular is very memorable thanks to the attention to detail and quality of the textures and lighting effects that are bolstered by Unreal Engine 4. The sound work is also top notch, with plenty of voice work and effects that help convey the sense of dread that oozes from this game.

Voice work in particular is extremely well acted, with some booming and expectedly creepy performances for some of the few friendly NPCs that you encounter. Oh, and you can pet the cat too. 10/10. Aw crap, we don’t do scores anymore, do we?

While not nearly as sprawling or complex system-wise like the Souls games, Mortal Shell is an elegant and contained game that benefits from the more limited scope set by its developers and succeeds in providing a substantially shorter but incredibly tight and rewarding experience that does justice to its inspirations.

The shell exchange mechanic is beautifully implemented and works to both add some welcome depth to the game in a single run or subsequent ones if you decide to go for new game plus. Or if you’re into the idea of tackling an even bigger challenge, there’s the option totally forgo using them. Permanently. Mortal Shell is a very pleasant surprise that is very much worth lighting a bonfire for.