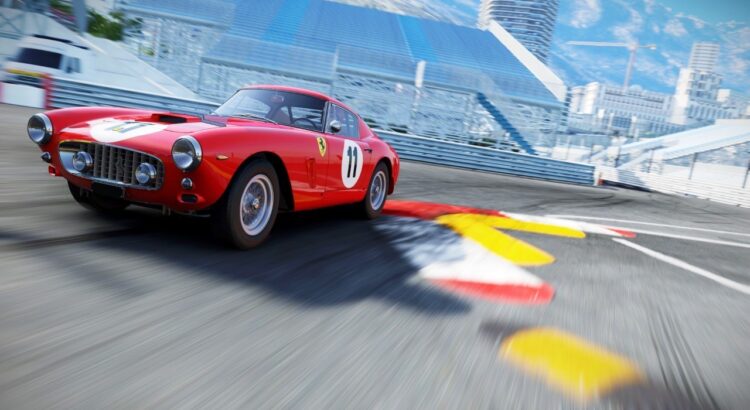 When I first got the review code for Project Cars 3, some very famous YouTubers were already badmouthing the game right from the start: “This is a travesty”, “What have they done to the franchise?”,”Slightly Mad is now Completely Mad!”. And yes, I can understand where all this “hatred” comes from. After many years striving to be a serious contender in the crowded racing simulator genre, Project Cars 3 takes a complete 180º spin and runs away from the original premise of the franchise. Ok, Slightly Mad Studios was recently bought by Codemasters (a company specialized in more accessible, arcade-feeling racing titles) but this newfound focus really took everyone – especially the “purists” – by surprise.

Project Cars 3 really aims to appeal to a more casual player instead of fans of more hardcore simulations. This can be seen by changes in career mode. In the first games, the aim was to become a top racing driver by progressing in different racing disciplines, from karts to GT cars all the way to LeMans prototypes like a real world professional.

This means following a calendar of events, deciding on which categories you’d like to participate and improve upon, take part in testing sessions, etc. That’s all out of the window in Project Cars 3. Here, you have a totally different approach where you have packs of events arranged by car category. And in each of these, you have a number of objectives to complete such as overtaking a certain number of cars within a time limit, completing a clean lap, or drafting an opponent for a certain amount of time.

This kind of objective-focused career can be traced back to Driveclub, a title developed by Evolution Studios – which has since been acquired by Codemasters, just like Slightly Mad Studios. It’s also of note that Driveclub’s game designer Paul Rustchynsky is also credited as game designer in Project Cars 3.

That is reflected by the kind of events present in career mode, like “breakout”, where drivers have to destroy barriers placed along the track in order to rack up points within the allotted time. It isn’t exactly the style of event you’d find in a hardcore racing sim like the previous entries in the franchise. In fact, it’s the sort of event that has long existed in racing games less focused on realism, something new in Project Cars 3.

New inclusions in this year’s title are the cornering rating and racing line percentage in the HUD. These tie-in with the absence of fuel and tire wear indicators from the first two games. It is probably one of the most commented aspects of Project Cars 3 since before its release: the removal of pit stops, fuel consumption, tire temperatures and wear. This means you’re always driving in the best conditions possible, with no worries about these aspects of real world racing, another clear indication that casual drivers were the focus of Project Cars 3 since its inception. One can wonder if this decision came after or before Slightly Mad’s acquisition by Codemasters, because this kind of fun-focused racing is more akin to games like the recent remake of GRID.

Gameplay-wise, Project Cars 3 is clearly an arcade racer. Car physics, while still grounded on earlier titles, have changed immensely. Here, you have a very approachable game that can be thoroughly enjoyed using a gamepad (unlike previous games where joystick control was infuriating most of the time), with a very quick and precise response to inputs. This point is driven home by the fact that gamepad fine tuning settings (like deadzone and sensitivity) are completely absent, while still available when you have a steering wheel attached to your console or PC.

Even with all the driving aids turned off, you’re far less likely to spin out on accelerating at the exit of a corner or lock up the wheels under heavy braking. And it’s here that you can feel the influence of Driveclub once more: the driving dynamics are eerily similar. Corner turn-in, lift-off oversteer, weight shifting on chicanes… it is all very similar to Evolution Studios’ magnum opus. Even the cockpit camera’s wheel and arms animations (which are very precise and realistic) seem to be lifted directly from it.

All these changes in gameplay and physics lead to some interesting choices players can dial in custom events: you can create very interesting combinations of races (like classic Lotus Formula One cars at Nürburgring Nordschleife on snow) with the assurance that no one (in both single or multiplayer) will destroy itself and others when taking a late braking point at Hatzenbach. You can also set a 32-car starting grid at Monaco full of Stadium Racing trucks and let all hell break loose. Event customization is strong as before, with every possible combination of day and night, weather and time compression just like in Project Cars 2, which is nice.

Car selection is another thing that carries over directly from Project Cars 2 with very small (but quite interesting) additions, the biggest being the 2019-2020 Formula E Gen-2 race car. For those who like this new category, you’re in for a treat: since it is basically the same car to all teams, you have the choice of choosing your preferred livery from all the cars that ran in the latest championship (from Mercedes, Audi, BMW and many others – including next year’s Porsche). The downside to it is that Project Cars 3 is now an asphalt-only affair, meaning that rallycross cars and tracks were wiped from the game.

To compensate for this decision, the game now features something very akin to arcade racers: car upgrades. It’s available only for roadcars, but it’s very similar to what you find in titles like Gran Turismo. Tires, brakes, suspension, transmission, forced induction and many more can be acquired and, as you progress through the game and level up your car, these upgrades also get cheaper thanks to level discounts. You can also upgrade roadcars to GT Racing spec (just like in Gran Turismo 1 and 2) which can be done at a discounted price if your car already has some upgrades in it. This means a “humble” Nissan Skyline R34 (available in the lowest Road E class) can be transformed into a monster machine capable of beating a Bugatti Chiron or Porsche 918 Spyder in hypercar races.

This upgrade mechanic is much more than a gimmick: some of the time trial and pacesetter events available in higher level parts of the career can be beaten with much less effort when you buy a low category car and upgrade it to the required level instead of using a car from the category the event is in. In my case, after struggling with a pacesetter event in Road D with a Porsche 959 and a Mercedes-Benz C63 AMG (both lightly upgraded), I was able to beat the event and all its time requirements using a heavily-tuned Audi TT-RS. A much lighter car, with racing tires, brakes and bigger turbo was much easier to navigate through tight corners than those two heavy beasts.

The presentation aspect of the game can now be described as a blessing. Menus were streamlined and are much easier to navigate, the old “grandiose” music selection was changed and now you have a quite pleasing and modern set of tunes, ranging from EDM, jazz and pop songs (and includes a dynamic setting which makes each unique song sound different in real time while you cycle through menus). Car customization is also new and very interesting. You can really make each car your own by changing number plate text and style, wheels, tires and liveries, with tons of real and fake sponsors. And best of all: apart from mechanical upgrades, every other customization option is completely free! So you can drive a lowly Toyota GT86 with absolutely no performance upgrades but with a really thoroughbred race car look if you want.

To sum it up, Project Cars 3 has a very distinct feel from its predecessors and it’s not (I REPEAT: IT IS NOT) a motorsport simulation. It is in fact a very similar game to both GRID and Driveclub in terms of handling and how easy it is to drive even the most powerful cars available. However, the upgrades add a new layer of replayability, especially in the higher levels of the career where difficulty ramps up. Project Cars 3 is now a “simcade” title and this will surely throw off old fans of the franchise. But if you like more approachable racing games, take it for a spin. You will be pleasantly surprised.