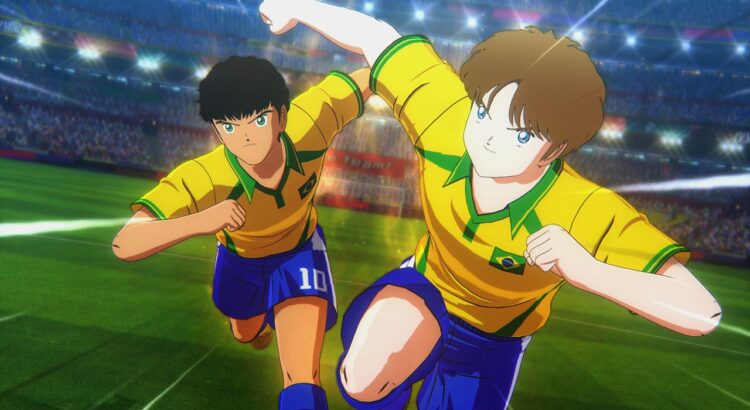 It’s no surprise why soccer (and what the rest of the world refers to as football) is so beloved. It’s an exciting sport to watch, and the drama that can spur from the in and off field events has made for some incredibly popular media. One in particular is Shonen Jump’s property Captain Tsubasa, which was released back in the early 1980s and took the soccer loving world by storm, with many game adaptations varying in quality over the years.

Captain Tsubasa: Rise of New Champions is the latest, and it’s probably the best one of the bunch. Developed by Tamsoft, who has a pretty long repertoire in games that includes Battle Arena Toshinden series on PS1 as well as the more scandalous Senran Kagura and Onechanbara, the first thing that you will probably notice about the newest Captain Tsubasa game is how visually faithful it is to the anime it’s based on.

Following up on previous Bandai Namco anime titles like Dragon Ball FighterZ and Dragon Ball Z: Kakarot, Rise of New Champions is a feast for the eyes for fans of the anime. Your interactions are somewhat limited when it comes to the story since most of it is played on the pitch as a very limited simulation of the beautiful game that boils down to getting the ball to star Tsubasa, and off of it in what could be best described as a visual novel with little in the way of choice.

At least the sport part of it is fun to play. You get to control whatever team Tsubasa is in at the part of the story you’re at and your goal is to win in order to progress the story. Obviously, you win matches by scoring more goals than the opposite team, but getting the ball in the net isn’t as initially simple as shooting them. Goalies on each side have a health bar of sorts and you have to whittle away at them before coming in with the big flashy kicks that the cartoon is known for.

While on the field, you can spend energy sprinting if you’re controlling the ball and pass it just as you can when playing FIFA or Pro Evolution Soccer, but the physics aren’t nearly as refined as those games. Still, controlling the ball feels good enough and when you’re playing defense it’s not as demanding to take the ball away than those other more realistic simulations since you have a dedicated tackle button that almost always works in regaining the ball and nothing in the way of fouls, unless the enemy dodges you. In later matches that happens more often, forcing you to be ever more aggressive if you hope to win and make any progress.

There’s also a few options when it comes to managing your team before and during games. You can pick players and move them around, as well as pick from formations that can better benefit your team during matches, but it’s all very simple and straightforward and is only there to get you a limited amount of control of what goes on with Tsubasa’s team. That’s not to say that the actual playing portion of the game isn’t enjoyable, but if you come into this expecting to play an anime inspired version of a deep soccer game, you’ll find it to be somewhat lacking.

Then again, thanks to its gorgeous presentation that’s extremely faithful to its source material, it’s as close to providing a playable version of the action from the anime as you could get. It’s fairly straightforward as well when it comes to moving with the story when it comes to the events that take place outside of the games having Tsubasa go through the motions of the cartoon scene by scene with no real interaction outside of a few dialogue choices that don’t really change the outcome in any way.

Still, for anyone with any familiarity with the anime, it’s really cool to see it unfold in such a sleek form as it does in the game. I grew up watching a variety of Japanese shows on local TV, and Captain Tsubasa was one of them. Honestly I didn’t really recall a whole lot of it when I first started playing outside of knowing that Ozora would eventually end up coming over to Brazil in order to play for my hometown São Paulo’s São Paulo Futebol Clube, which was certainly exciting to me as a kid back when I actively cared about following soccer.

Outside of the Episode: Tsubasa mode, the main story campaign of the game, you can play through Episode: New Hero, where you can create your own star player and carry them up the ranks. It’s generally recommended to people who completed Episode: Tsubasa, but I didn’t have much trouble playing, so you probably won’t either. It’s a more character stat development-heavy mode where your custom player evolves in skill along the story. Whether it’s as a forward, midfielder, or defender, that choice will result in raising a certain skill faster than others, i.e forward stats with forward position, etc.

New Hero is further developed by having you pick five players from a number of named characters from the Tsubasa world and having them interact with your created toon in the form of friendships, regardless if they’re on your team or not. Dealing with different players results in upping a certain skills like various kinds of blocking or tackle styles, or flourishes when it comes to offensively-minded positions. It’s a neat way to have your player-created player have more of a flavor than merely throwing them into the thick of it as a lot of anime games would have you do. The further you get into Episode: Tsubasa, the more choices for this interaction become available in Episode: New Hero.

As a bonus, when this episode is over, you can carry your play to Versus and keep playing with them against friends locally or randos online. At the time of this review I haven’t been able to test out the online mode due to it being constantly barren. If you can find someone to play with online, you’ll be able to take your created team and climb up the ranks down from Rookie League up to the international pitches or simply get in a lobby and play with a number of the teams from the main game. In local multiplayer Rise of New Champions supports up to four players and you can play either a single match, a penalty shootout, or a championship and you can have more than one player controlling a team if you want, which works well when playing with kids who haven’t yet grasped the controls, for instance.

It’s heartwarming to see the amount of care that’s obviously behind crafting a game like this, even if it’s a tad disappointing to have so little in the way of interactivity outside of playing a very limited game of soccer. Then again, the inclusion of signature moments of the anime if you manage to complete specific objectives during matches (called Dramatic Action Demos) is awesome and should be really nostalgic to fans of the series. Compared to a game like Dragon Ball Z: Kakarot, which admittedly haphazardly delivered a more open-ended experience that delved into more than the anime/manga, Captain Tsubasa is way tighter in scope and ultimately not as ambitious, for as well as it does converting the action of the show to game form.

On PC, Captain Tsubasa: Rise of New Champions is quite a looker and fairly well optimized. I ran into a bug where all the text in the game was warped outside of the correct text box which I was only able to fix by running it in windowed mode. It’s a common issue that I’m sure will be fixed soon, but it’s still annoying. Other than that, it performs admirably and is very well localized in a number of languages including Brazilian-Portuguese, which is usually a standard and welcome part for Bandai Namco releases.

For as shallow in terms of providing a bone fide simulation of soccer as Captain Tsubasa: Rise of New Champions is, it more than makes up for it by providing an exciting portrayal of the anime as a game. While sim fans might come out of it slightly annoyed by its limitations when it comes to the sport, anyone who’s had any previous connection with Captain Tsubasa or anime as a whole will eat it up.