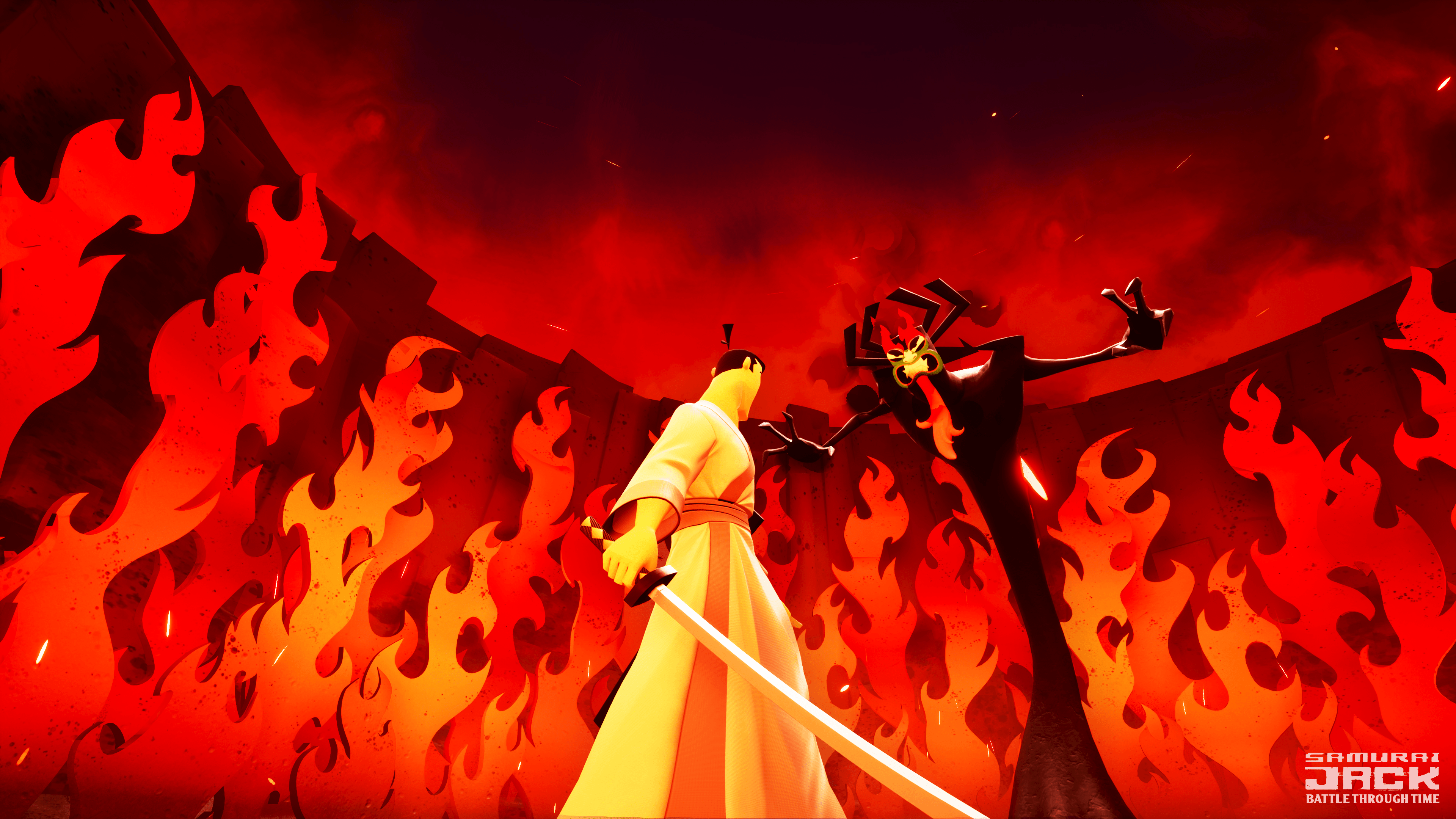 It wasn’t until Samurai Jack and the Clone Wars shorts released during the prequel Star Wars trilogy that I came to truly appreciate the genius of Genndy Tartakovsky’s sense of art. Sure, I watched my share of Dexter’s Laboratory on Cartoon Network, but those cartoons really set the bar for quality and storytelling. Sadly, Samurai Jack never really saw a conclusion for its five-season run, not until many years later when Tartakovsky went back and gave the series a real finale with a much darker and bloodier version of his admittedly intense but still kid friendly tale of a lone samurai that got dragged through time by the very embodiment of evil, the shape-shifting Aku.

Samurai Jack: Battle Through Time isn’t the first videogame based on the franchise by any stretch, there were a few released during the original run of the cartoon back in the 2000s, but it’s the one that I got to play and even like. Kudos to studio Soleil for nailing the feel and grit of the cartoon while at the same time delivering a fun action adventure game in the vein of what could now be considered — and boy I feel old for saying this — old school Team Ninja Ninja Gaiden and even the Devil May Cry games. Jack is quite nimble in this game and can handle an insane amount of enemies at the same time, juggling and comboing them in the air and slicing everything to ribbons in satisfying fashion.

The game takes place during the ending of the second run of the cartoon, when Jack is finally going back to his original time in the company of his love Ashi, estranged daughter of Aku. His father-in-law has a surprise over his oozing sleeve, though, as he throws Jack through a rift for yet another adventure, this time across many of his previous fights. As a whole, Battle Through Time is a ‘best of’ for Samurai Jack in game form, bringing back even his best friends and frenemies along for the ride, like the Scostman, Rothchild and even Da Samurai, who’s now a shopkeeper and part-time trainer.

In this, you fight as Jack through many waves of enemies and do some light platforming. While the latter is pretty forgettable, mainly having you jump and eventually double jump over gaps and run from one side of the screen to the other during arbitrarily shifting 2D segments, it’s the combat that really makes this Samurai Jack: Battle Through Time shine. Jack is pretty skilled with swords, but throughout the game he’ll also show off how good he is with other weapon types, and there are many of those you can pick up and level up during the game, like spears, hammers, maces, bow and arrows, and even guns!

They help provide plenty of variety to how you approach combat as each has its own stats like speed, power, and most importantly, durability, which you should definitely keep an eye out for unless you want to lose your favorite blade forever when it breaks. Each also has its own special power that builds up over time as Jack collects red orbs, such as really fast strikes or even a full screen attack which come in handy if you find yourself in a pinch. That bar tends to refill really quickly, making it worth using these abilities often.

There are a few enemy types during the Samurai Jack: Battle Through Time, but not enough to really keep things interesting for the six or so hours that the game lasts. Then again, the encounter design tries its best to mix and match them in order to provide a challenge, and in that it mostly succeeds in making the game be somewhat difficult even on normal difficulty if you’re not really used to playing action games.

As Jack you can level up and learn new combat skills like parrying and dodging, which when pulled off at just the right time can give you an extra edge during fights, and look really cool to boot. There are also a number of buffs you can acquire in the three upgrade trees as well as special combos for each of the weapons that Jack can use. You spend two types of currency for these that are dropped by enemies you defeat and by destroying the many breakable objects strewn around levels.

That brings me to Samurai Jack: Battle Through Time’s overall presentation. The Samurai Jack cartoon was an achievement in 2D animation, bringing some of the best character design seen in a TV show up until that point, and while that’s something commonplace nowadays with the numerous cartoons that were influenced by its style, there’s no denying that the show was on a class of its own at the time it was originally out.

Battle Through Time does its best to emulate the look of the show and bring it to 3D, and for the most part it does okay. It’s by no means an ugly game, but it visually feels like a title that could’ve come out years ago when action games like this were plenty, where 2D characters ended up shoehorned into polygonal models and not really marrying with the feel of the cartoon they were based on. Personally, I would’ve liked to see something closer to the look of the cartoon, although I ultimately grew to accept what Soleil went for with this.

Same goes for the sound design of the game. On one end, it disappointedly uses pretty bland music and repetitive sound effects all throughout, a shame considering the excellent music that the show was known for. But the voice acting makes up for those middling aspects of the presentation. The talent from the show is certainly back to reprise their roles in the game, which should be a great treat for fans of the cartoon.

For what it’s worth, Samurai Jack: Battle Through Time had no business being as good and fun as it is. Soleil could’ve just phoned in a pretty barebones action game and called it a day, as a lot of developers are wont to do with licensed properties, but they haven’t. It’s by no means an incredible or deep game by any means, but it does what it does surprisingly well. For anyone familiar with Samurai Jack, it’s more than worth playing through and enjoying a nostalgic jog through memory lane.