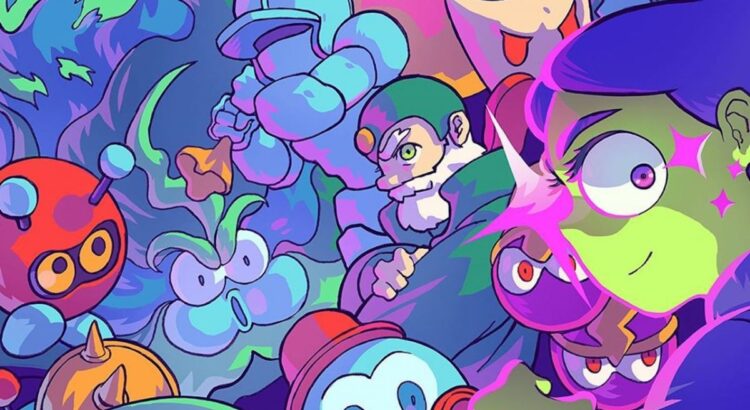 There’s only so much you can do with platformers. That was my thought until I played Witcheye, a game that manages to add a really clever to twist to the genre. Developer Moon Kid took it upon themselves to shake things up by having a really different movement and attack mechanic that’s really original and fun to do. And Devolver being Devolver lost no time in snatching it up and putting up under their extremely well curated publishing seal.

In the game, you play as a little witch whose magical items have been stolen by a sneaky knight under orders by a mage, and in order to chase and reclaim her stuff she takes the form of a floating eyeball that bounces around like a pinball in order to get around. By flicking your analog stick, the eye quickly floats around, and if it comes into contact while flicking you’ll defeat them. In the case of the Switch, you can also use the touch screen to move around which works quite well.

It plays incredibly simple, but it’s a lot of fun. Levels are short and sweet, having you collect a certain number of gems that are held by enemies or hidden around the stage before making your way out. Puzzles are also pretty straightforward, but satisfying to get through, like having to figure out what part of the environment is hiding collectibles or the key to the end. Sometimes you get locked into an arena and have to get that key back from an enemy, or have to deal with different kinds of surfaces that have a variety of properties that change how you move, such as water which slows you down considerably.

Don’t worry, though, there are a few boss fights to tackle along the way, and that’s where you’ll face the biggest challenge in Witcheye. Some can only be damaged at specific times, forcing you to time your attacks while at the same time avoiding their patterns; one thing is common to all of them and that’s what makes boss fights so enjoyable. The developers clearly took that to heart by making these into their own game mode, which becomes available once you finish the game for the first time.

Aside from that mode, you also gain access to two continuously harder game options that make your witch eye a lot less resilient to attacks, forcing you to keep on your toes… well, better put… keep an eye on movement and be more precise in how you flick around. The game doesn’t take all that long to beat since levels don’t take a lot more than a minute to get through and there aren’t a whole lot of them, so I didn’t have an issue with the bonus modes only becoming active after being done with Witcheye once. And they’re enjoyable enough to add much needed replayability to the game.

It’s one of those games that brings something new to its genre and at the same time doesn’t overstay its welcome. It’s got a very original premise, tight controls, and adorable pixel art presentation to boot. Witcheye is an eye-popping game in all of those departments, not just as a cheeky pun for closing out a review. If you’re looking for a unique kind of platformer to play, be sure to check it out.