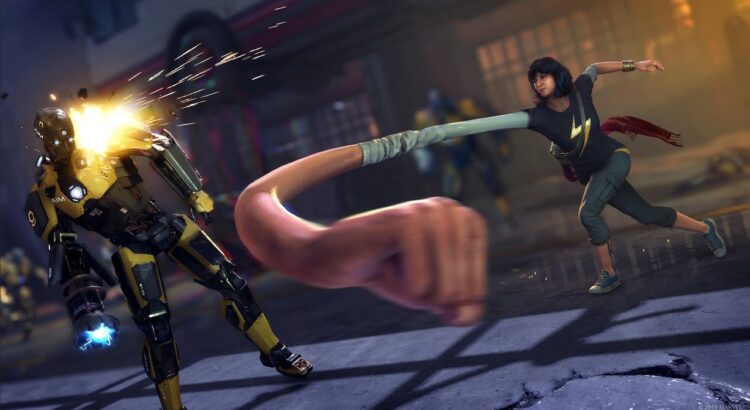 There’s much to be said when a superhero game turns out great. Insomniac’s Marvel’s Spider-Man from 2018 and Batman Arkham Asylum from Rocksteady released nearly a decade before have since become the gold standard for how not only games based on comic book properties should play, but have influenced how action adventures have been designed as a whole.

Whether it’s Batman’s combat making its way to even Spider-Man and the host of later WB open world romps like Mad Max and Middle Earth: Shadow of War or the way Insomniac treated web head’s long-running continuity influencing even the source material it came from, it can’t be denied that these were formative creations. Sadly, the same can’t be said about the newest Avengers game.

Square Enix and Crystal Dynamics’ Marvel’s Avengers has had a rocky time ever since it was announced. Borrowing from some of Marvel Comics’ most popular franchises, one that’s spawned a decades-long multi-billion dollar movie series, this is a game that could’ve been anything else and would still be just an okay brawler.

Back at BGS last year, I reported how by the numbers it played and boy that headline makes even more sense now having made my way through the entirety of its single player campaign and a fair amount in multiplayer. Back then, I had no idea about the underlying mechanics that Marvel’s Avengers would feature besides its tried and true combat and set piece heavy, bombastic action scenes. Stuff you’d expect to see in a dungeon crawler or even an MMO like leveling, gear hunting, and even generic missions are its bread and butter. If that’s how this game expects to keep me engaged for the long run, they have another thing coming.

That’s not to say nothing works in Marvel’s Avengers. Some aspects of it do. The problem is that it’s been done in an extremely gamey way that doesn’t really do a good job keeping my interest, especially now that I’m done with its admittedly fun but flawed single player campaign. I don’t want to have to grind for more powerful gear just so my level 25 Iron Man can finish this raid on an AIM facility that I’ve done numerous times before during the course of the Marvel’s Avengers; nor do I feel like having to switch over to a barely used Captain America because someone else already picked my favorite hero when I joined their quickplay lobby. Those are dumb examples, I know, but they did indeed happen during my time with this game, and they’re only a couple of the many issues I have with it.

In true Marvel fashion, though, this game opens really well. It’s Avengers’ Day in San Francisco Bay as Tony Stark and co are ready to unveil a new source of energy that’s syphoned from terragen crystals in a demonstration to power their new shiny helicarrier the Chimera, all the while they host a bunch of fans in a theme park of sorts, including Kamala Khan, the biggest of them, with whom you play for the majority of the game. As her, you walk about collecting comics and having casual run-ins with her heroes. No action at all for about half an hour, just pure character development. Things go cataclysmically wrong though, and the city ends up destroyed due to a terrorist attack that triggers a massive explosion, leaving many victims encased in cocoons and resulting in the apparent death of Captain America.

Fast-forward five years after what came to be called A-Day, Advanced Idea Mechanics (AIM), the company headed by former allies of the Avengers, have seemingly taken over the country and shifted the blame to superheroes, relegating them to isolation. Their robots patrol the streets in search of Inhumans, the mutated results of the terragen explosion who have since emerged and displayed special powers. Kamala is one of them and thankfully we’re spared from another origin story as she’s brought back into the story already knowing of and in (almost) control of her own set of powers, the stretchy super strength kind.

A die-hard fan of the now disregarded and scattered Avengers, who are blamed for all the chaos of A-Day, Kamala happens to run into some evidence of what really happened that day and ends up in the sights of AIM, leading her to escape from her hometown of Jersey City and into an adventure to Utah, where she believes the remnants of the resistance are located. From there the campaign plays out in very bombastic ways as the new Ms. Marvel and more members of the team are found and brought back together to face AIM and save the Inhumans over the course of around 12 hours that should take you to finish it.

Outside of the pure grind that is trying to get your power score to go up, there’s no real visual reward for wearing the best gear there is since it doesn’t really show on your character while playing. And that’s where the cosmetics come in, which are bought with in-game currency that either slowly drops by playing normally, or that can be bought with real-world money and unlocked right away. The variety of looks is disappointing as well, since there are basically a handful of designs for each character that are color swapped and spread across numerous skins you can buy. If you’re hoping to get a specific one, you better have a lot of patience. Closing in to 25 hours playing the game, I’ve yet to come close to being able to buy one of the cheaper looks for my favorite character, Ms. Marvel.

Speaking of her, Kamala is by far the highlight of Marvel’s Avengers. She’s played so earnestly and really evolves into a hero of her own throughout the story. Over the last few years, her comic book just happened to be one of the very few that I happened to pick up after hearing amazing things about it. It’s awesome to see how well her portrayal in the game really makes her shine. The rest of the cast albeit looking a little off model at first especially if you’re used to their movie actor counterparts are satisfyingly done. Bruce Banner plays off real well with Kamala and their relationship amidst their similar situation in regards to how they got their powers is surprisingly touching and developed quite well throughout the story.

The PC version of the game with which I was supplied for this review is currently in a somewhat unstable state. With some graphical options like dynamic resolution and some of the AMD bells and whistles turned on, it’s been prone to crashes to desktop after a few minutes of play. Turning those off helped me get through the bulk of my time reviewing it, but didn’t rid it of bugs completely, with a returning crash around the final portions of my playthrough before writing this review. Finishing missions in multiplayer sometimes leaves the game in an unresponsive state for several minutes before finally dropping to a results screen and saving progress. There are also some hilarious issues with cosmetic skins that break facial animation for heroes like Captain America. These didn’t hamper my time playing too much, but are worth noting regardless and are bound to be patched out post release.

I came into Marvel’s Avengers with no expectations and for the time that I spent playing, I have mixed feelings about it. In its current state I don’t feel encouraged to keep playing in multiplayer since it feels like yet another hamster wheel of a game which I already ran through and burned myself out several times in the past. On the other hand, the single player portion of Marvel’s Avengers managed to be quite fun, so if anything, it has that going for it. The developers have stated that there’s a load of content planned for the next year or so which I’m hopeful will make it a much better long run proposition, but as it is now there’s not much reason to assemble with friends nor with random online players.