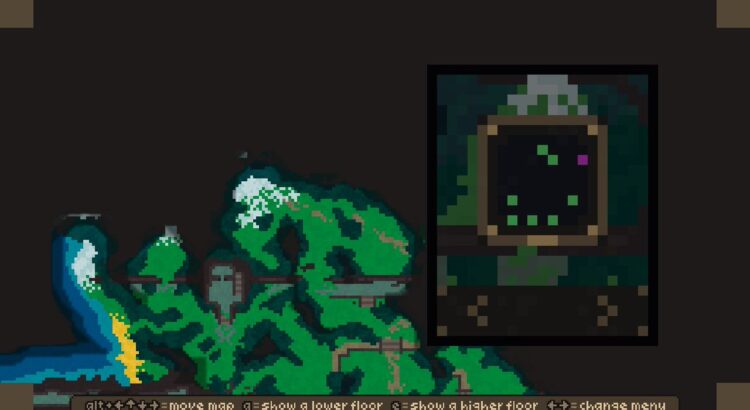 Alt254 has a lot to be thankful for what Adventure did back in the Atari 2600. It helped paved the way for graphical adventure games and it’s still to this day a legendary effort when it came to crediting developers at a time where that simply didn’t happen. Developer Warren Robinett managed to put in his name in the game by coming up with the very first instance of an easter egg in video games, starting what’s thankfully now a standard practice, one that often takes minutes to scroll through the bigger the teams behind making games get.

But it’s quite rare for a game to take a more literal inspiration in Adventure like Alt254 does. Rename Studios’ minimalist action-adventure game has you playing as a pixel exploring a very stark looking temple in search for an exit, all the while fighting off enemy pixels, talking to friendly ones and partaking in puzzles, trying not to fall into any traps along the way.

If you had to pick Alt254 apart from an old Atari game, you’d probably have a hard time aside from the fact that you can play it as close to HD as a chunky looking game like this can get, and of course convenient features like save points, continues, and even modern visual tricks here and there. Aside from those, though, Alt254 is as hands off in regards to giving you tips on where to go as any game of old, and for that it’s welcome and ironically refreshing considering how simple and to the point it is.

That said, it’s not easy getting lost in it as it initially might seem. At all times you have access to a map by pausing and the way around the temple isn’t as confusing or obtuse as the games it tries to emulate. Scrolling also helps a bunch in that regard, showing you what’s ahead giving you time to prepare as you move on the grid, unlike the more traditional screen transitioning you’d see back in the late 1970s and early 1980s. Due to the more locked in scope, it’s hard to miss things coming your way too.

Minimalism also plays a part in how you progress through Alt254. The way forward can open up with the use of a “key” (another pixel of a different color, really) that lasts a certain number of uses or by pressing down floor switches. The same goes for floor traps that can be overcome by placing a block on top, forming a safe path to walk on. That’s it, really. But in its simplicity Alt254 succeeds in providing a compelling and easy to pick up and play experience thanks to the proximity of save points and how quick it is getting back to any particular spot in case you end up dying.

As expected for a game where you can count the elements that make up the game on screen built by “pixels” at any time, Alt254 can run on just about any computer, on the lowest or highest resolution possible. You can zoom in the game window in case you want to play on a bigger display, but it’ll usually be contained to the middle of the screen with plenty of empty real estate around it.

Alt254 is an unassuming game that works extremely well in delivering a worthwhile action-adventure experience that is at the same time very lo-fi and gripping in its minimalism and simplicity. Rename Studios struck that balance admirably, making Alt254 a remarkable game for as basic as it can be in this day and age.