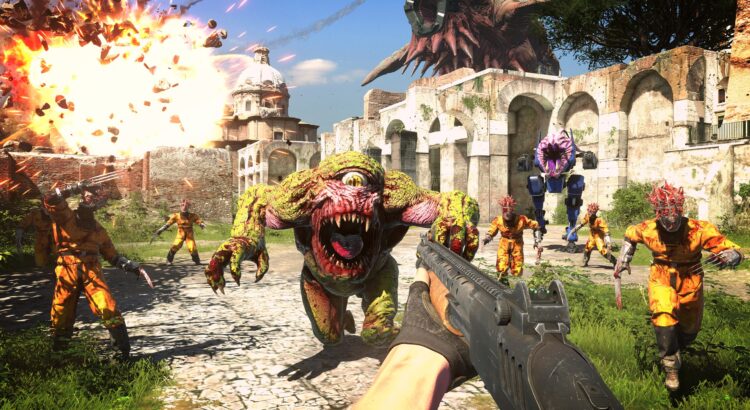 The Serious Sam series is now a venerable part of first-person shooter history, having been with us for almost two decades – the original game was released way back in March 2001. As the saying goes, time flies when you’re mowing down Sirian were-bulls with a multi-barrelled laser cannon.

Nevertheless, the wait between main games in the series has been long. Serious Sam 4, long-delayed, follows a full nine years after the previous entry. For other series, such a long gap might bring with it expectations of a major overhaul to gameplay – or even some kind of reboot. While developers Croteam have sometimes explored changes in tone and art style between games, they have never significantly altered the gameplay formula and this pattern continues with Serious Sam 4. While it’s hard to see the repetitious and dated gameplay winning many new converts, fans of the series are likely to be satisfied with Sam’s return.

A prequel to Serious Sam 3: BFE (which was itself a prequel to the other games in the series), this new entry sees Sam and the beleaguered Earth Defense Force fighting an alien invasion of Europe. Established fans of the series will appreciate the return of the familiar gameplay loop this entails. While exploring the environments in Italy, France and Russia, the player will inevitably trigger a series of large-scale fights in which familiar weapons and enemies return. Expect to spend a lot of time running backwards, doing the familiar coach gun dance with Kleer skeletons, and pumping rockets into four-armed magic lizards perched on ancient buildings.

Croteam’s reluctance to switch up the formula becomes apparent very early on. Despite the shift to European settings, the extent of the similarity to BFE is striking. In addition to the familiarity of the weapons and enemies, there is the same sense of a clash between the fairly realistic settings and the outlandish monsters. The uncanny emptiness of the open levels returns, the streets of Rome and Carcassonne merely an arena for carnage which rarely rewards exploration. At times, Serious Sam 4 can feel as if it was developed almost back-to-back with the last game, and for some reason shelved for years.

There are some changes. Driveable vehicles make a return after their absence since Serious Sam 2, and there’s a small skill-tree accessible when Sam huffs a purple alien gas. New enemy variants include melee-focused former humans with blades on their hands, and imposing zealots who wield sledgehammers and are invulnerable to frontal attack except from explosives. The ability to unlock dual-wielding can make circle-strafing bosses and desperately fending off an army of screaming kamikaze bombers that bit more efficient.

The new additions are slight, however. The skill tree feels like a half-hearted concession to modernity, with some of the abilities being so minor as to be almost redundant. With these gestures to change being so minor, familiarity and repetition prevail in Serious Sam 4. With this comes the return of the usual strengths and weaknesses the series has had since 2001. Back then, it was exhilarating to move deftly around an arena and destroy hundreds of enemies, but it eventually became exhausting. Back then, the jokes would sometimes land but more often wouldn’t. Today, the same holds true.

Throughout these battles, and while exploring the copy-pasted level geometry between them, there is a sense of tiredness about Serious Sam 4. In the years since the last game was released, some developers have brought older series into the present – as with Shadow Warrior and Doom – and others have used new techniques to explore the gameplay of yesteryear, as with Dusk and Amid Evil. Croteam attempts neither. For better or worse, Serious Sam 4 is stuck in the past – largely re-playing the series’ greatest hits, albeit in a new European setting and with a few extra bells and whistles.

To be fair to Serious Sam 4, there is a real thrill to be experienced in the battles when that old, familiar gameplay loop really clicks. This happens more often when the player is alone, as Sam’s comrades have poor AI and worse dialogue. They’re also completely invulnerable, which mitigates some of the challenge. When Croteam’s designers put in their best work, the composition of enemy mobs is just right and careful movement is required to shrug off the worst of the incoming damage. In the best of the fights, it’s also crucial to switch to the right gun at the right time. This delicate dance of movement and weapon-switching, while hordes of bug-eyed aliens descend on Sam in attractive locales, can be very entertaining indeed. Sometimes, it’s like 2001 all over again – and perhaps that’s enough.