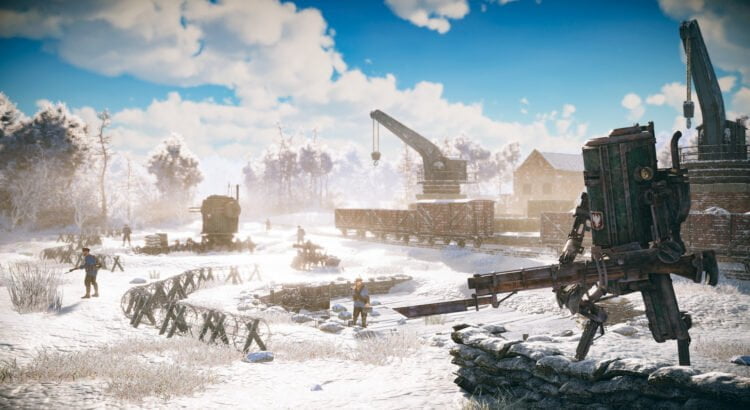 The year is 1920. Europe is reeling from the terrible aftermath of the Great War, which has devastated the continent. A ceasefire has been brokered between the Saxony Empire and the Rusviet Tsardom, with the Polanian Republic caught in the middle. Sadly, peace is short-lived, as the Rusviet Army invades Polania with the intent of absorbing it back into Rusviet, and the Polanian resistance fights back. Saxony is inevitably drawn back into the conflict, resulting in yet another mass slaughter. Oh, and most of the warfare is undertaken using mechs; lots of Dieselpunk mechs. Welcome to the world of Iron Harvest.

Iron Harvest is based on the 1920+ universe created by artist Jakub Rozalski, which was also used as inspiration for the board game Scythe (although the board game and the video game are not officially connected). Iron Harvest is a real-time strategy game in the style of Company of Heroes, but also takes inspiration from Warhammer 40,000: Dawn of War and World in Conflict.  Across the lengthy main single player campaign you’ll lead armies of each of the three main factions, each with different story-driven missions, heroes and units. The stories of the three campaigns intersect and overlap with each other at different points, providing more context to each side in the conflict.

There are actually some really interesting and well-written characters; Anna for example is a Polanian resistance member trying to find her brother who is accompanied by her pet bear, Wojtek. Together they form a powerful hero unit which can utilize Anna’s sniper ability and Wojtek’s powerful mauling attack. Some famous historical characters even appear, such as Tsar Nicholas II and Grigori Rasputin (in this timeline, the Russian Revolution has not occurred). The campaign is truly the game’s showpiece, and is probably the most fun I’ve had with an RTS story in years.

While some missions don’t involve any base-building at all, most involve it to at least a limited degree. To earn more of the necessary resources needed for unit training and repairs (iron and oil), you need to capture various control points across the map which provides a steady income, such as iron mines and oil pumps. Your engineers can construct a variety of buildings including fortifications, headquarters and barracks, which can be used to train new units. This certainly is a game that tries to streamline away from base-building though, almost to the same degree that World in Conflict did. Once you’ve got your base and can defend it, you won’t find the need to have to continually extend or improve it, and likewise with any resource points you capture, given there are only about half a dozen constructible buildings in total.

There is a good variety of units across the factions, ranging from normal riflemen all the way up to massive mechanical walking tanks, including one which is rather reminiscent of the Star Wars AT-AT Walker. Each faction has a variety of different mechs, each of which is animated fantastically. Combat is very straightforward, and mostly devolves to a variety of rock-paper-scissors trade-offs when fighting enemy units, as there is always something which counters another unit. While this is acceptable in an RTS like Age of Empires which has literally hundreds of units, it doesn’t work as well for Iron Harvest’s smaller pool. Most of the mechs for example are slow and poorly armoured at the rear, meaning a well-placed group of anti-armour gunners should be able to take them out. Therefore most battles eventually become a numbers game, with the better equipped army more likely to be victorious.

Unfortunately unit AI, both your own and enemy, is poor. Your units will regularly stand around in the open if they’re being shot at, and will only sometimes make use of available cover. The game is also a bit inconsistent about what counts as cover, meaning you can hide behind a wall, but not behind houses. Enemies will likewise barrel straight into the path of danger, even against overwhelming forces or into the line of fire for units which can pulverize them. Moving units around can also be a bit challenging as units move at different speeds, and there isn’t an option to move in formation sticking to the speed of the slowest unit. This is especially a problem for heavy mechs, some of which are inordinately slow and can hold up an entire army if they get in the way.

The game looks gorgeous, and it sounds gorgeous. The maps are wonderfully detailed with lots of different buildings and foliage, all of which can be blown up and destroyed in a variety of satisfying ways (my favourite being to simply have a large mech stomp through a building). The visual design of the mechs is also superb, with each faction’s roster feeling true to their style and aesthetic. The Polonian mechs for example tend to be lighter and more agile, while Saxony’s are heavy and lumbering. The soundtrack is also a nicely stirring orchestral soundtrack, which wouldn’t feel out of place in a Dawn of War game.

Iron Harvest is a decidedly old-school RTS with some modern trappings, with a bombastic main campaign with a surprisingly well written story. It doesn’t trump World in Conflict for my all-time favourite RTS campaign, but it’s certainly within my top 10. Although the AI and pathfinding weaknesses dampen enjoyment somewhat, the sheer spectacle of watching a horde of antiquated mechs causing chaos on the battlefield is always a delight to witness. Combined with its interesting setting and good writing, Iron Harvest represents a welcome addition to the RTS pantheon.