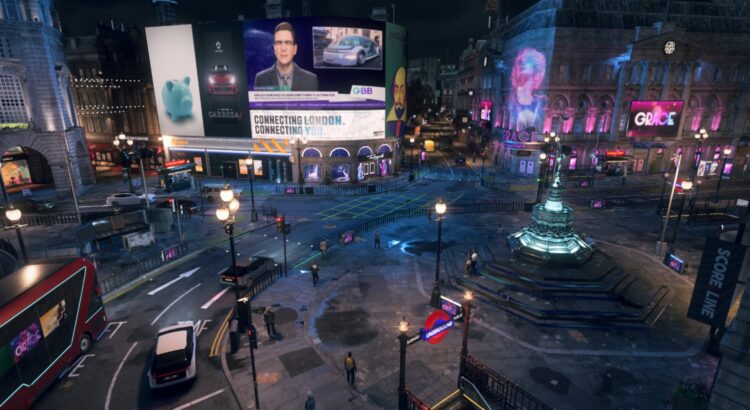 The Watch Dogs series has been a franchise which has undergone radical tonal shifts over the years. The first game was generally an extremely serious, often heavy-handed look at surveillance and technology set in Chicago, featuring a protagonist in Aiden Pierce that nobody really liked. The second game was much more light-hearted and easygoing, with the likable Marcus Holloway as lead character joining a fun bunch of hacker friends in San Francisco. It still focused on what can be quite troubling subject matter, but paved it over with fun jokes and a goofy vibe. With Watch Dogs: Legion, the tone once again has shifted back towards the gritty and sombre, this time with many dystopian overtones.

Watch Dogs: Legion is set in a near future London after Brexit, Scottish independence and the continuation of a far-right, authoritarian government in charge (presumably Conservative-led, but the game never states). The use of technology has exploded, but so too has surveillance. London is already one of the most surveilled cities in the world, and that has only gotten worse with the widespread adoption of drones for everything from parcel delivery to construction. The UK is visibly rotting, with many streets outside the extremely wealthy areas rundown as well as widespread homelessness. Immigrants are rounded up, and the Oval Cricket Ground has been turned into a detention centre. The Queen hasn’t been seen in months, and the rumours are she is on her deathbed. The aesthetic is the film Children of Men mixed with A Clockwork Orange and what Britain is actually like, right now. At the beginning of the game, DedSec, the hacker group who have featured in both previous games, is framed for a series of bombings across London, and the government authorize a PMC called Albion to take over all security functions in order to hunt down any remaining members of the group. From here, it’s your job to reconstruct DedSec, clear the name of your group and free London from the privatized oppression of Albion.

The “play as anyone” feature is one which has been impressively integrated into the game, but doesn’t go far enough in allowing you to feel like your team is actually that meaningfully different. Every NPC in the game has a unique appearance, character bio containing a few snippets of flavour text, and even their own voice. These feature a wide range of accents, from East London wide boy to Afro-Caribbean. You can recruit anyone to your team, and then swap characters at any point outside of restricted missions or areas. Dialogue in cutscenes changes slightly depending on which character you’re currently playing as, with characters adding a little personal flair to their vocal mannerisms. The range of characters is truly impressive, and I was able to assemble a team consisting of people such as an 18 year-old protest leader, a 70 year-old Asian architect, and a 53 year-old Northern Irish poet. Most characters also come with a variety of perks, which can make switching to them useful. Xian Wang, my elderly architect, has uniformed access to building sites, so she can walk through camera laser grids without setting off alarms. Robert Morrison is a graffiti artist, and has access to a special non-lethal paintball gun and is also fleet-footed, meaning he can stealth more easily.

Moment to moment gameplay hasn’t really changed since Watch Dogs 2; it feels like the development team spent most of their time implementing the “play as anyone” system and then ran out of time for thinking how to make the missions more innovative. They’re not bad, but they are all varieties of what had previously appeared in the other games. You can hack cameras and use a robotic spider to hack wall terminals, which you use to open relevant doors and download data. Most characters are outfitted with non-lethal weapons but some come with a variety of lethal guns. Dispatching guards lethally or non-lethally has little practical bearing and is mainly down to your conscience; I tried to avoid killing Metropolitan Police officers or the Buckingham Palace guard more than I worried about killing Albion private guards or gang members (the Met having been essentially taken over by Albion against their will). Killing or injuring someone does have some minor consequences, as their associates within the world will get a negative opinion of you and you may even find them mourning at the location their loved one died (e.g. I once accidentally ran over and killed a pedestrian, only to find two people crying at the same location a few in-game days later).

The open world is genuinely impressive; London is depicted fairly faithfully although distances have been shortened and various things have been moved around. The only thing I thought was incorrect was that the iconic red postboxes were generally far too small, being about waist high, while most in Britain are chest high or taller. Graphically the game looks splendid, with wet, night-time vistas looking especially impressive in a grim way. The London Underground is present, but only as a fast travel system; you can’t actually go into any of the stations besides the initial entrance hall. Driving took me a little while to get used to because the camera does not like moving independent of the car, but it feels similar to Watch Dogs 2. There is also a neat Autodrive feature which will casually drive you to your destination obeying traffic laws, which is nice for checking out the scenery. Most of the cars on the road are autonomous and with no people inside them at all, which means that although you can still hijack cars, most of the time you won’t be pushing some helpless driver out when you do it.

Watch Dogs: Legion is likely the most politically conscious game Ubisoft have ever created, which makes it more frustrating for the ways the game fails to live up to its own standards. The game has various in-universe radio shows with guests (who are clearly real-life academics) talking about the rise of far-right populism and how fascist parties build and sustain their power. It was quite surprising, but very welcome to hear. Unfortunately Ubisoft decided to include contributions from a known transphobic commentator in several shows, which is pretty disgusting. The main problem comes with the disconnect between what the game says, and what it actually does. At the end of the day, your team of elite hackers comprised of ordinary Londoners work to bring down Albion through mainly technological means, rather than doing anything which would deny them political or systemic power. Liberating a monument simply means removing the ugly billboards on it, but Albion forces nonetheless remain in the area. The game is very clearly pitching itself in the anti-fascist mold, and DedSec takes part in a variety of direct action, but it’s not clear what DedSec stand for from a policy point of view besides returning to “normal”.

Watch Dogs: Legion in many ways is a competent sequel, although gameplay-wise it’s one that plays it very safe. Politically the game did a far better job of openly espousing an anti-fascist, anti-racist viewpoint than I anticipated, but it suffers from failing to follow through on its message when it actually comes to implementing that viewpoint within the game. This has been a problem in many games for years, but for Watch Dogs: Legion it feels especially troubling given how the world it imagines feels so viable. Killing hundreds of soldiers in order to “liberate” London doesn’t feel authentic, and it also doesn’t make much sense that there aren’t any NPCs who will always oppose DedSec; everyone except story NPCs can be eventually won around to the cause (which is clearly nonsense when applied in real life). Watch Dogs: Legion is another competent Ubisoft open-world adventure with plenty to do, and while it manages to communicate its message better than anticipated, it can’t manage to fully commit to it.