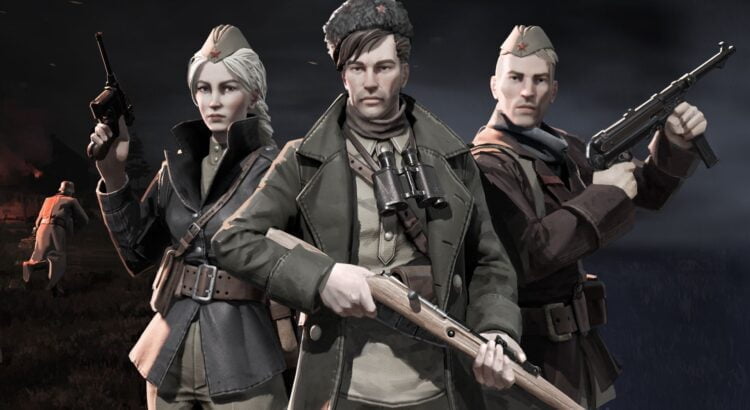 Back in 1998, Madrid-based Pyro Studios successfully infiltrated gaming history with their first release Commandos: Behind Enemy Lines. A truly novel and innovative game, Commandos tasks players with using a small and highly specialised group of characters to unpick the layered defenses of a series of German installations during World War II. The game shifted over a million copies in a little over a year, and other developers transposed its satisfying stealth mechanics to the Old West, 1930s Chicago, medieval England, and even deep space.

Like the Green Beret darting into the shadows, the fertile real-time stealth tactics sub-genre disappeared just as quickly as it had emerged. Happily, recent games have shown that this concept was not dead all these years, but in fact merely lying in wait, anticipating the right time to strike. Munich-based developers Mimimi Games have taken the genre to new heights with the wonderful Shadow Tactics: Blades of the Shogun in 2016, and the equally superb Desperados III earlier this year. Beating the in-development Commandos 4 to the punch is Partisans 1941, which seeks to ally new advancements in the genre with a return to the classic World War II setting.

Developed in Moscow by fledgling studio Alter Games, Partisans 1941 takes place in the aftermath of the German invasion of the Soviet Union. While the soldiers in Commandos were dropped behind enemy lines, the plucky resistance fighters in Partisans 1941 have been overtaken and left stranded by the German advance. Gradually growing in number, the partisan unit must exploit any opportunity to sabotage the enemy war machine – a campaign which escalates from destroying a single tank to mounting major raids on German bases.

The core gameplay of Partisans 1941 will be familiar to anyone with experience of other games in the genre, particularly its recent revival. Success depends on carefully avoiding the viewcones of enemy soldiers, in order to elude or eliminate them on the way to an objective. Each character has specific skills which must be combined for maximum effectiveness. The central character Commander Zorin, for example, is an expert with throwing knives but is best combined with the superior distraction abilities of his teenage protege Sanek.

A crucial contrast with Commandos and other genre highlights is that open gunplay is more viable and often necessary – provided enemy ranks have been thinned out appropriately. Some characters excel when the team goes loud, such as Fetisov – who has a devastating area-of-effect attack using a submachine gun. Besides firearms, other weapons which would rarely be used in other games are crucial here, such as tripwire explosives and improvised landmines.

Unfortunately, the interface has a number of frustrating issues. Certain icons are very small and difficult to click on, especially when speed is needed. Games of this kind generally trade in open information, but Partisans 1941 breaks with this. The fog of war feature is more of an annoyance than a source of tension, and the amount of noise that certain actions make is only indicated while they are being executed. This inevitably leads to a lot of frustrating trips to the quickload key.

In a number of ways, Alter Games have chosen to boldly experiment with and augment the genre formula. In other games of this type, successive missions were linked only by cutscenes that told the story. In Partisans 1941, there is a strategic metalayer in which a secluded partisan camp must be managed. Between missions, partisans can be sent to attend to various tasks, such as fishing, gathering wood, and producing makeshift weapons. Major injuries sustained in the field should also be healed in the medical tent, lest they impair performance later on. This kind of gameplay is reminiscent of the XCOM series, but feels very novel in this context.

The strategic layer has implications within the missions themselves, too. Wherever possible, Commander Zorin and his subordinates must be instructed to scavenge food and supplies to stave off starvation and provide for upgrades to the camp. Partisans also gain experience, level up, and unlock new and upgraded abilities through a skill tree unique to each individual. Furthermore, the player is able to select the partisans who engage in each mission – although Zorin’s presence is always mandatory. Taken together, these strategic elements help to build a palpable underdog atmosphere. The sense of growing your resistance movement from a few starving and stubborn rebels into an effective fighting force is deeply satisfying.

However, these innovations come at the cost of a hefty increase in complexity and micromanagement. Additionally, the ability to choose partisans for each mission imposes constraints on level design. While Shadow Tactics and Desperados III have ingenious environments crafted around the team forced upon the player by the developers, Alter Games have been compelled to make missions much more open. Sadly, the locations are mostly quite bland and featureless as a result.

While this is a compelling game which makes admirable attempts to shake up the genre, it is no overstatement to say that compared with the masterpieces made by Mimimi Games, Partisans 1941 is inferior in virtually every respect. The story, characters, interface, level design, sound and visuals are all a step or two below the best of the genre. Gamers who love it when a plan comes together are better catered to than ever, and while they will enjoy much of Partisans 1941, they may prefer instead to revisit one of the new giants of the genre. This particular war story may be best left to the completists.