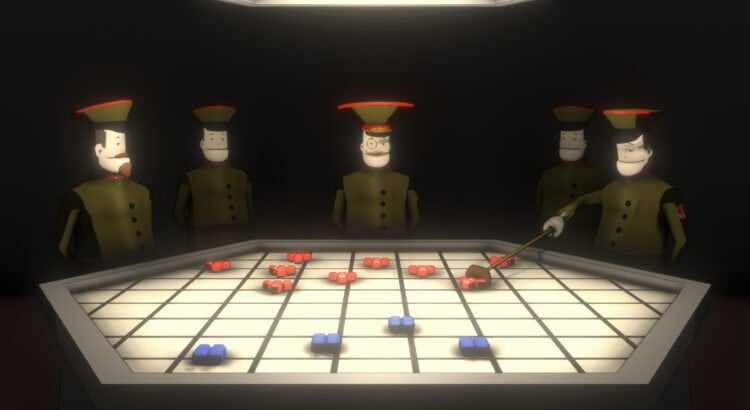 It’s a fact somewhat unacknowledged, especially in the United States, that the Soviet Union won the space race. Sure, the US managed to achieve the final milestone of walking on the moon, but the USSR set just about every other space first; the first satellite, first dog in space, first man in space, first woman in space, first spacewalk, even the first object to land on a different celestial body (the probe Luna 2). The argument that walking on the moon outweighs all these other achievements feels decidedly cheap. But what if the Soviet’s hadn’t just won the space race, but had actually gone on to colonize other planets? Kosmokrats has the answer.

Kosmokrats is a story-driven puzzle game, taking place in an alternative 1980s where the Soviet Union has established permanent space stations, manned by hundreds of people. You play the role of a lowly potato peeler who is “temporarily” drafted into becoming the newest drone operator, responsible for helping to construct new space infrastructure, space stations and starships.

The game’s story is pretty entertaining and funny, although can be surprisingly sombre at times. For example in an early mission you’re tasked with saving a number of escape pods being launched from Earth, before you realize that they escape pods won’t ever stop arriving, as in the background you watch as Global Thermonuclear War engulfs the planet. The story is definitely tongue-in-cheek, but it works well as an adventurous romp.

Kosmokrats main gameplay element is its physics-based puzzles. You control a Soviet space drone which is used to assemble various space stations and spacecraft into their final form, either by magnetically pulling pieces together, or by gently pushing them (or sometimes, not so gently). Everything has weightless momentum (although thankfully does not obey actual physics and will slow down when not pushed), and you only have a limited amount of charge in the drone to achieve your objectives.

Building the space stations therefore requires you to think about how best to use the drone’s abilities, while not allowing the space station or any cosmonauts to be harmed during the construction (who will occasionally join your missions as passive observers). Ramming into objects too fast can permanently damage or destroy them, but Kosmokrats operates on a “no fail state” policy; if you don’t manage to achieve your objectives, the game continues regardless, although the story may change. Failing a mission can also lead you to incur various penalties, which will then make future missions more challenging. There’s also no option to restart a mission; if you fail, you’re locked in.

The main issue with the gameplay is essentially its core facet; its finickiness. Because everything is drifting around, getting any pieces to line up correctly and neatly can be a frustrating process, especially as your magnetic charge ability is very limited. The only exception is when you correctly align two connector segments together, which will snap together with a satisfying clunk.

It is also exceptionally easy to damage pieces by drifting into them, and once destroyed they cannot be recovered. You also can’t simply spend the time very gently nudging things together either, as all missions are on a time limit. The drone is very sluggish to handle, both on keyboard or on the recommended gamepad, so you’ll be wrestling with the controls a fair amount of the time. Outside of the puzzles you can spend downtime between missions in your command room, where you can read the state-approved newspaper, or use your kartoshkas to purchase a variety of upgrades for your cabin.

Kosmokrats has a funny, well-written story and a great soundtrack, but the somewhat frustrating puzzle design and control can occasionally hamper your enjoyment. It’s best played in bitesize chunks rather than mainlining it for hours on end, as this allows you to enjoy the story and not get too bogged down with the puzzles. With a more robust physics system, the idea of “Tetris in space” could be really well implemented, and while Kosmokrats is clearly going for a goofy, Surgeon Simulator-esque vibe, the controls don’t feel responsive enough to completely lean into it. Nonetheless, it’s still worth experiencing for the darkly humorous tale of Soviet space domination.