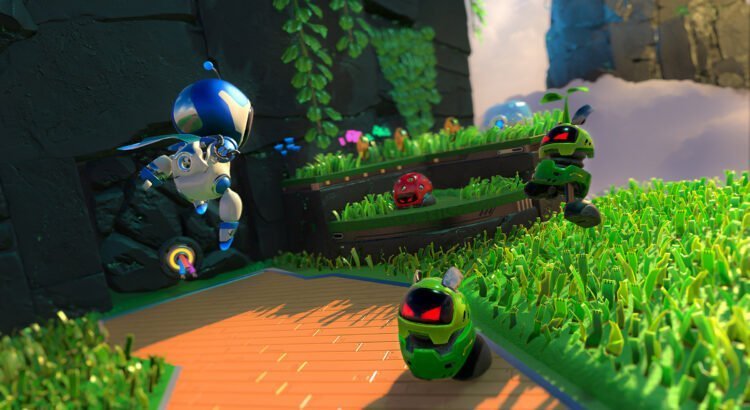 Astro’s Playroom, the free download available after getting your new PlayStation 5 up and running, may have you thinking back to the history of pack in games with consoles and wondering when exactly you’ve played one that’s as much fun or functional, in terms of getting you acquainted with the system’s capabilities.

You might recall the Super NES and Super Mario World’s Mode 7 effects on display, or the Sega CD’s numerous pack-in games from various releases in the system’s cycle, from Sonic CD to Ecco the Dolphin to Sewer Shark. If you’re more apt to be familiar with modern consoles, the PlayStation 4 had the free PS Plus download Resogun, a 2D side-scrolling shooter. In comparison, Astro’s Playroom may be arguably one of the best, if not the best games to be featured with a new system, which is no small feat.

Starting up a new game brings up a small robot, who looks like the end result if the two robots from Wall-E had a robo-kid, which jumps out of your DualSense controller on-screen and lands in the central hub. This central hub is the main hub of the game and features a number of other robots around performing various activities, a see through glass surface housing the floating CPU unit and several large doors to launch you to each of the game’s worlds.

Each world in the central hub is something of a tribute to Sony and PlayStation itself and you’ll be collecting PlayStation consoles and peripherals of yesteryear, as you traverse each level. The game also seems like a tribute to hardware itself at times, with levels aptly named, “Renderforest” and “SSD Speedway”, as an example. Some levels have you navigating the friendly skies by standing on a flying CPU unit, while having to move around in order to avoid dangerous electrostatic charges. Another level features the song, “I’m your GPU” being sung in the background in computer synth voice, which is kind of cute and adds to the whole hardware aesthetic.

But you’re not just on the lookout for the Sony hardware from past ages, as more commonly littered around each level you’ll find puzzle pieces, which, when all are collected, will complete a massive Sony themed wall mural. These puzzle pieces and consoles you pick up will sit comfortably in the Lab, the other room that you can access from the central hub. The Lab also features a capsule machine where you can trade your hard earned gold coins for capsules containing… you guessed it, more puzzle pieces and consoles to fill up your lab! You can even collect little robot statues to pretty up your lab as well. The machine will also occasionally reward you with empty cans as well.

The main reason to go through the levels, however, may not be for the Sony consoles or the puzzle pieces, but to get familiar with the more intuitive features of your new DualSense controller. For example, several levels have you controlling your new robot friend in a ball, as you use the touchpad to move about over different surfaces such as sand and mud and ice, each of them giving off a different tactile sensation. Rolling through sand and mud is appropriately sluggish and provides considerable resistance to your touchpad movements while traversing over ice is slick and hard to stop.

Another level puts you in control of your robot in a monkey suit, where you use the motion control ability to grab ledges and flip between rubber-band like handholds. This is interesting, however, we wish these mechanics were more accessible, as people who have difficulties with fine motor control or limited stamina may find these sections challenging to complete.

Astro’s Playroom is an enticing and enjoyable mix of the old and the new. While its showcase of the new features of the PlayStation 5 is compelling, greater accessibility would have added to the overall package.