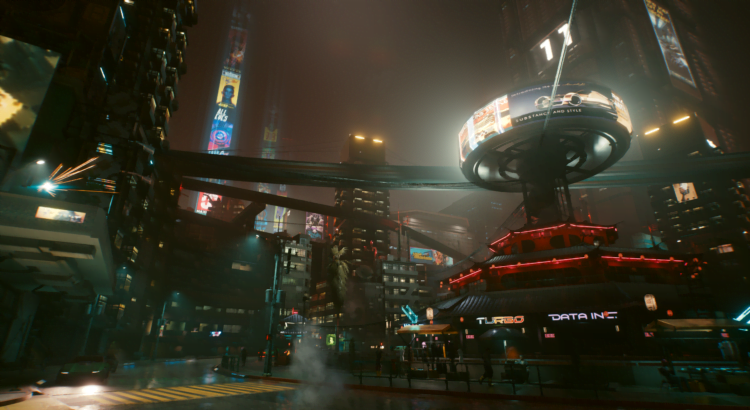 One of the first things I saw in Cyberpunk 2077 was a man falling out of the sky. I was on my way to an early mission when I got out of my car into a crowded alley full of bustling citizens, neon billboards and skyscrapers stretching up on all sides. Suddenly, I heard a scream and a man colliding with the pavement. I ran over to the man, but he was dead, a pool of blood forming a few metres away from his body. There was nothing on his corpse. The other pedestrians milling about completely ignored his body, and didn’t even react when he initially hit the ground. I looked up from where he fell, but all I could see was the side of a skyscraper from which he had presumably jumped or fallen. Afterwards I walked away to my mission objective that was bugged, so I had to restart from the last autosave. This man falling out of a skyscraper and impacting the pavement with a sickening thud rather appropriately sums up the state of Cyberpunk 2077 at the moment.

Cyberpunk 2077 is a game of tremendous contrasts. When it’s working correctly, it is one of the most gorgeous looking games ever created, with a simply stunning techno-futuristic world. It has a reasonably involving main plot and some interesting characters, as well as some great side missions and generally solid gameplay. But when Cyberpunk is not working correctly the illusion immediately falls apart, and unfortunately this is a great deal of the time. For a game that has apparently been in development for eight years and for which management forced developers to crunch for extended periods, the fact that the game was judged worthy to launch in this state despite repeated delays already is a huge black mark against the developer and publisher, CD Projekt Red.

Cyberpunk 2077 is ostensibly a first-person role-playing game set in the cyberpunk universe of the similarly named tabletop role-playing game. You play as a mercenary named V, who may have one of three backgrounds for the story; a “Corpo”, a company lackey in the Arasaka Corporation who is promptly fired, “Nomad”, a wandering adventurer new to Night City, or “Street Kid”, who is returning home to Night City after living elsewhere. All three of these paths converge after an opening section with you becoming acquainted with friendly mobster Jackie Welles and together planning to conduct a major heist at the headquarters of the Arasaka Corporation to steal a powerful biochip. The main plot is fairly engaging and has some well written characters, and takes a number of twists and turns along the way. Unexpectedly, Keanu Reeves (who featured heavily in the game’s marketing) is a major character rather than a bit-part, and while his voice-acting can sometimes be a bit stilted, he manages to make his character of Johnny Silverhand feel surprisingly deep; he’s a complete bastard, but an interesting one. V on the other hand you can’t really “role-play” as; your V is quite regimented in the same way the Sole Survivor was in Fallout 4, only occasionally making choices which can impact the story. The voice-acting for V is good but the male-gendered voice sounds particularly gruff and took me a while to get used to.

On the surface Cyberpunk 2077 shares many similarities with the modern Grand Theft Auto games. There is a big open world city which you can drive around; you can undertake various criminal missions; there are in-game radio stations, TV shows and an Internet browser. But this is certainly not a Grand Theft Auto-clone, with the gameplay primarily taking inspiration from the Deus Ex games, especially Human Revolution and Mankind Divided. Most missions allow you to approach them from a variety of angles, including going in all-guns blazing or trying a stealthy approach, or investing into melee weapons and slicing people up with a katana. The shooting isn’t world-class but it’s perfectly sufficient in getting the job done, while the stealth can feel a bit hit or miss (alerting one enemy to your presence immediately alerts all other enemies in the entire building).

Hacking is a major part of gameplay too, and you can hack essentially everything in the world, from vending machines to even people. Hacking a person is a bit like casting a spell on them, which can either be damaging things like causing their cybernetics to overheat, or defensive effects like rebooting their optics so they are temporarily blind. There are also a plethora of other systems including crafting, upgrades, a gigantic skill tree (which uses the The Elder Scrolls IV: Oblivion system of levelling up skills by using them), and outfitting your character in a wide variety of costumes (although if you’re going for the best stats, your outfits will be a random assortment of clothing which is frequently hilarious). A lot of these systems feel rather superfluous and unwieldy, to the point that I barely crafted anything as I was constantly picking up better weapons looted from enemies.

The world of Night City is certainly the game’s biggest strength. Simply walking around downtown, gazing up at the enormous skyscrapers towering above you crowded with colossal neon advertisements is the closest anyone has ever got to creating a properly Blade Runner-esque world in video games. This is especially true whenever it rains, the ray-traced reflections really bringing the visuals to another level. Almost every environment in the game is nicely detailed with lots of lived-in touches, which make them feel realistic. The architecture is very reminiscent of Hong Kong and Japan, and unfortunately the game does lean in on the Orientalist tropes of a lot of cyberpunk fiction, with plenty of Chinese and Japanese writing adorning the buildings alongside a couple of rather stereotyped characters. On a similar note the game very prominently displays a transphobic advert that caused controversy before the game’s launch; it’s plastered all over the city making avoiding it impossible.

By this point the plethora of bugs that plague the game are well known, but it’s worth stating again that many of these bugs are game-breaking. I’ve had missions fail to trigger correctly, random NPCs defaulting to T-poses, enemies failing to register that you’re attacking them, and a bevy of minor irritations such as missing geometry, blurry textures or animation errors. A significant problem isn’t actually a bug, but is the remarkably primitive game AI for pedestrians and vehicle traffic. Pedestrians and cars in Cyberpunk are entirely ephemeral; whirling the camera around can cause everything to unload and vanish as though you were playing Grand Theft Auto: Vice City. Pedestrians have no unique behaviour, either walking around on pre-set paths or being locked into set animations. Vehicle AI is even worse and has no idea how to navigate around any obstacle, being locked on set driving lines which they never deviate from. It means that despite how gorgeous Night City looks, it never feels like a living city when its citizens act like automatons and faze out of existence as soon as you look away.

This problem extends to the game’s police response system, which sets a star rating based on how many civilians you’ve killed. In the Grand Theft Auto games this worked by having police cars drive up to your location, get out and start attacking you, or chasing you if you’re in a vehicle. In Cyberpunk, police officers and drones literally spawn out of nowhere directly behind you (or even sometimes in your line of sight) and start shooting immediately. They are never seen driving cars and will never give chase in a car either, so getting out of their pursuit radius is a cakewalk. It is decidedly cheap and immediately breaks the immersion to see characters spawning in so close to the player, and this is definitely something that will have to be addressed in a future update.

Despite everything, I have had fun playing Cyberpunk 2077. There is plenty here which is enjoyable. When all the bugs are polished out and hopefully a number of gameplay changes are introduced (the police system perhaps being the most egregious) I’m sure the game will eventually garner a more positive reception. But that doesn’t excuse the mess that CD Projekt Red shovelled out this year, especially for those playing on base Xbox One and PS4. Cyberpunk 2077 is perhaps a classic example of feature creep, where additional elements kept being added to the design which the developers had neither the time nor the expertise to fully implement. Billed as a more stripped down and linear experience perhaps set within a Deus Ex-style hub world, Cyberpunk 2077 could have lived up to expectations. But as an “Ur-game” which would allow players to do just about anything they wanted, and which the marketing relentlessly teased, Cyberpunk 2077 is just a shadow. A pretty shadow, but a shadow nonetheless.