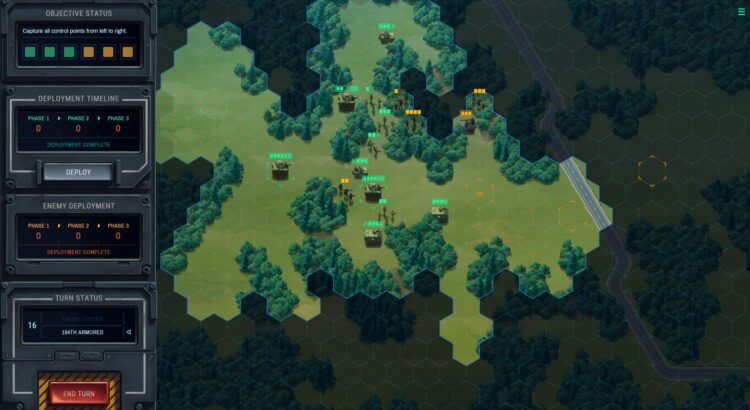 Some developers have developed a reputation for creating certain styles of games. Zachtronics is one such developer, having gained great respect for their series of interestingly fiendish puzzle games, from the chemical component construction of Spacechem up to alchemical transmutation programmer Opus Magnum. Möbius Front ’83 is at first glance a game very much outside their wheelhouse; a turn-based, hexagonal tactics game. While Möbius Front ’83 wears the trappings and appearance of an old-school hex-based wargame, it is actually closer to a puzzle game than first meets the eye.

Möbius Front ’83 as the name suggests takes place in an alternate 1983 where the United States comes under attack from a mysterious force of enemy combatants, armed with equipment nearly identical to the US Army. The game has a story-based campaign with fully voiced cutscenes, although the details of the story are only very gradually eked out over the course of the opening missions. Unfortunately there isn’t any story within the missions themselves, meaning you’ll often have forgotten what was happening by the time you’ll have got through one of the fairly lengthy missions. That said I enjoyed the story and the quality of the voice acting, both of which are usually absent in most other Zachtronics games.

The main focus of the game is its turn-based strategy. Each mission has you deploy your initial forces onto a hexagonal grid of the countryside, and then slowly move your forces into position each turn while the opponent does likewise. You get access to quite a range of units, from standard infantry to tanks and helicopters. Almost all units can either move or attack, with scant few being able to do both in the same turn. Units also have a pre-set attack range at which either they can attack or likewise be attacked. Moving your forces forward too quickly without planning ahead can easily lead to failure, as on the standard difficulty the enemy AI is fairly ruthless. This behaviour means that you want to play most missions defensively, even if you are strategically being the aggressor.

The strategy mostly closely mirrors chess, in that you do not ever want to advance into the range of the enemy where a “piece” (i.e. unit) might be taken, as it gives them a turn to attack you. Likewise you don’t want to move into an area covered by the fog of war without scouting it first, as enemy infantry love to hide in woods and ambush you. Given this, a lot of missions feel a bit like a dance of waiting for the enemy to advance into your line of fire while cautiously planning your moves to make sure you don’t open yourself up to flanking attacks.

Möbius Front ’83’s main weakness is its pacing. If you can get round the limitations of the turn-based nature of the combat and the chess-like approach you need to take to encounters, missions can be reasonably engaging in bitesize chunks. But each mission tends to go on far too long, and with no turn timers or any worthwhile reason to hurry (which indeed can often lead to your defeat if you try), missions quickly turn into a grind of slowly and methodically moving across the map, trying to get in ideal range of enemy units to make sure that they move into attack line and not vice versa. Likewise mission objectives don’t tend to vary much beyond capturing a set number of control points, and eliminating all enemy forces is often not required in order to achieve this. In addition to the main campaign there are also a number of side diversions such as a card game and a programmable radio reminiscent of TIS-100, but the strategy campaign is the vast bulk of the game.

Presentationally though Möbius Front ’83 is masterful. Between mission briefings take place as though you’re in the back of a mobile command center, with a tactical overview of the battlefield situation, complete with PDFs of 1980s US Army manuals. During missions the screen takes on the appearance of a commander’s battle computer, and hovering over any unit gives a quick overview of its strength and abilities (friend or foe). Units are pixelated but in a fairly detailed manner, kind of reminiscent of old Command & Conquer. The music is a perfect blend of 80’s synths, military marches, and ominous drums. It beautifully sets the atmosphere across the entire game. Matthew S. Burns has done the music for a lot of Zachtronics games, but here he has really outdone himself.

While I admire Möbius Front ’83 aesthetic and stylistic choices, I did find it ultimately too slow going to completely hold my attention. The restrictions to moving and attacking plus the somewhat arbitrary nature of the fog of war meant that I felt I was occasionally lulled into a false sense of security, only to be comprehensively defeated by one or two misplaced moves. That feeling, that a mission can be lost in an instant does make the game feel more puzzle-like, where each encounter has a correct “solution” which would solve the scenario in the most effective way. Möbius Front ’83 is certainly different from Zachtronics usual outings, but it doesn’t manage to entirely create an experience that feels both strategic and rewarding.