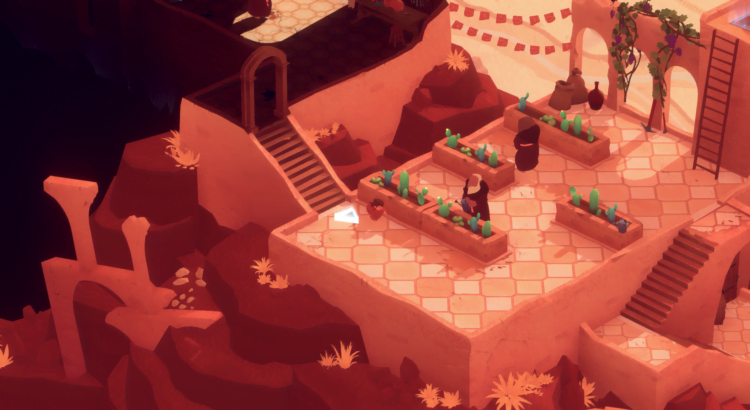 The Old West has grown in popularity as a videogame setting in recent years. At one time, Western-themed games were as hard to find as a sober cowboy in a half-price saloon, but their numbers have steadily grown. Lately, the dusty towns and byways of the West have played host to shooters, turn-based tactics, and open-world games. El Hijo uses it for a stealth adventure, but is a very different prospect to the current apex of that mix, Desperados III.

Developed by Berlin-based Honig Studios, El Hijo (“The Son”) tells a fairly straightforward story of a young boy and his mother who are victimised by a gang of roving bandits. Separated at the outset of the tale, the two characters are played separately in their respective levels, which are seen from a fixed isometric perspective. The graphics are fully 3D, but due to this locked perspective and the stylised visuals, the game can appear at a glance to be two-dimensional.

The presentation is generally very good. The colour scheme leans heavily into the warm shades of the desert, but the locations are well-differentiated. Light is a significant aesthetic and gameplay element, and lends certain locations a rich atmosphere. The music is the best evidence that Honig Studios were more influenced by Italian Westerns than by American ones. The soundtrack, and particularly the main theme, reflect the influence of composers like Luis Bacalov and the late, great maestro Ennio Morricone. One divisive design decision is that El Hijo features no written or spoken dialogue at all – which makes localisation a breeze, but makes even a story this simple both less clear and less engaging.

As a stealth game, El Hijo may be of most interest to those who aren’t seasoned veterans of the genre. This is because the level of difficulty is quite modest, and because the game leaves very little room for creativity or individuality. Stealth games and puzzle games are closely connected, because very often a stealth scenario takes the form of a puzzle to be solved. El Hijo feels particularly strongly like a puzzle game – not only because of the frequent need to move boxes around, but also because each situation really only has one solution.

Generally speaking, the tools available to the player are standard fare. The player can crouch behind certain obstacles, sprint between patches of shadow while guards are looking away, and hide in pots or pieces of furniture. When playing as the son, players gradually build up a small “arsenal” of distracting toys, such as a slingshot and a clockwork soldier. At times, control shifts to the mother, who is less capable of hiding but has access to a more powerful slingshot which can break objects in the environment.

Despite the frequent changes of location, and the interesting switching between the son and the mother and their respective abilities, El Hijo begins to feel fairly rote relatively quickly. This happens when the lack of alternative options becomes increasingly transparent. Yes, it is possible for the player to go out of their way to “inspire” children located around the levels – an unusual collectible, as far as that goes – but it hardly seems worth it for the sake of unlocking some artwork. What would be more engaging would be the chance to genuinely outsmart the guards or to plan something ingenious, but El Hijo simply isn’t complex enough to provide this.

Looked at as a puzzle game, or as a strictly entry-level stealth adventure, El Hijo has a lot to recommend it. It has a distinctive and attractive look, and a charm all of its own. Those looking for a genuinely emergent or inventive stealth experience, however, will be better served elsewhere.