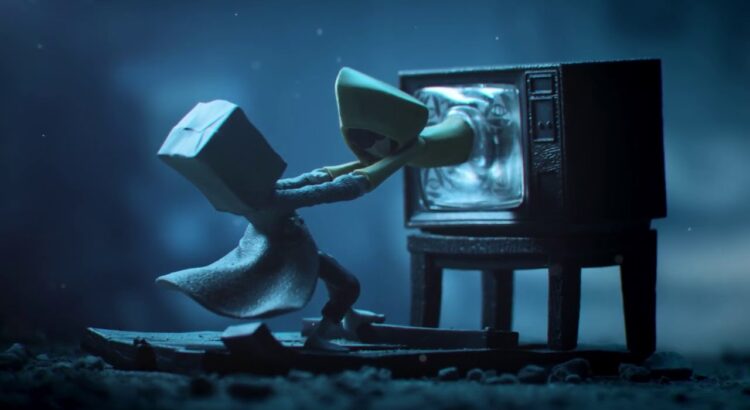 I can recall the point I simply had to quit playing Little Nightmares 2 because, well, it was only a few moments before sitting down to write this review. My little pals and I were skulking around a pretty spooky, almost pitch dark hospital. Luckily for us, we had managed to find a flashlight a few rooms before, and lo and behold, it came really handy for the things we started facing minutes later. Creepy mannequins started coming to life, and the only thing keeping them from tearing into us was that flashlight.

After a couple of moments of slowly making our way through, one of my friends had to be left behind: there was only room for one kid through that opening, and after all, we had to get that fuse in order to open the path out of that awful place. And it didn’t take long for things to get bad, since we had to cross a room full of those baddies seconds later. As much as I tried, we kept getting caught by the monsters, even when we were sure the light was hitting them, when if gameplay was fair in Little Nightmares 2, they would’ve been frozen in their steps.

Well, if there is one thing this game isn’t is fair. Or subtle, for that matter. Up to the point where I stopped playing after over thirty attempts at surpassing such an annoying obstacle, I had a mostly enjoyable four hours playing Little Nightmares 2. Having not played the first game, I was curious to see what all the fuss was about, considering all of the praise back in 2017. And from a presentational quality standpoint, Sweedish dev Tarsier absolutely nails it with Little Nightmares 2, with some of the most atmospheric and scary art direction I’ve ever seen, rivaling PlayDead’s work in Inside especially.

The comparison to PlayDead doesn’t stop there. Little Nightmares 2 has a lot in common with their games, not only in style but also in the way it delivers its gameplay. I found Limbo in particular absolutely frustrating because of all the trial and error in it, and even though I was later chided by an editor for my opinion, I gave it a stern review back in my GameRevolution days. Inside also suffered from some questionable design choices, but I ended up liking it a whole lot thanks to the masterful work done in ratcheting up the tension throughout that entire game.

And for what it has going in tension, Little Nightmares 2 would’ve been fantastic on its worth alone. That is if Tarsier didn’t feel necessary to include so many insta-fail scenarios, usually tied to chases, where our mostly helpless protagonists have to run away from giant enemies. The game’s controls are in no way precise, and due to a lot of animation priority, they’re really damn slow to respond. So when you’re forced to not only hold a button to run along with the analog stick and at the same time use the other to clumsily point something in the opposite direction, it can get tricky.

While I’m used by now with finicky control schemes in games, I simply can’t stand unfair scenarios like such, even more so when it’s clear that the cards are so obviously stacked against me. Any sense of immersion is simply thrown out the window when it’s my 20th time attempting the same gameplay section only to fail it when I clearly got through it, only failing because a mannequin pulled off a Super Bowl-worthy miracle and grabbed us even though it was nowhere close enough to do so.

There are also the times where you’re forced to fight, even though your minute character isn’t equipped to do so. Enemies are much quicker and can react to your movements before you can get a single, painfully slow hit in, dealing you in and forcing a retry, in an usually all too far checkpoint. It was also during a particularly nasty one of these where I almost dropped my controller, but eventually persevered by my sheer wish to see what else Little Nightmares 2 had to offer if I could only endure its some of its painfully bad and questionable segments.

But enough is enough. For all Little Nightmares 2 has going for it in sheer style — I absolutely ADORED the school segment, for instance, with its just plain disturbing teacher (dis)figure following my every footstep, it’s fantastic — it’s all undone by the dreadful repetition that comes with trial and error. Don’t get me wrong, though. Trial and error can be an excellent motivator when it comes to games and some of my favorite ones have a decent amount of it in them, like Desperados and Hitman, but it’s only when there are tangible benefits to enduring it that trial and error truly works. When you’re simply doing it for the sake of winning a battle of attrition against sheer annoyance, it kills whatever sense of joy there is to be had in overcoming an obstacle.

And even if you do manage to get through it, you’re usually left with a feeling of gratitude for never having to do it again. To me, that’s really the opposite I’m looking for when playing games. I want my time playing to actually mean something, whether that’s finishing a tough level that relies on skill and memorization, or eventually figuring out a puzzle. That doesn’t mean they have to constantly please me at every turn, but damn it, let them be a little more enjoyable to get through than Little Nightmare 2. For as gorgeous and positively scary as it is, I’m putting it down for now.