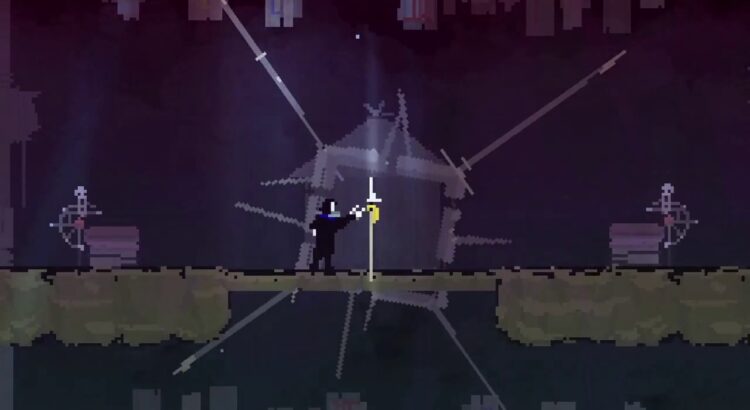 There are few games that can be beat in a single sitting that are better than Olija. Skeleton Crew Studios’ pixely harpooning adventure might take you only a few hours to get through, but they’re well worth it. And while there’s nothing particularly unique to the game, it does everything excellently, from its unique presentation to the simple setup it spins its story within.

As a man called Faraday, a down on his luck governor of an unnamed village, you decide to board a ship and try your luck at the fortunes that you might find at sea. Unfortunately, you and your crew end up shipwrecked at a mysterious land. It doesn’t take long for things to get going though, as a gruff oarsman guides you to an island where you stumble upon a magical harpoon that lets you teleport to whatever it attaches to.

The people of this world fear the power of the harpoon, and the titular Lady Olija is one of the only ones that cares to even look at Faraday, who doesn’t take long to fall for her. The cause of the ruin of her land is an evil cult who have taken over thanks to their knack for Eldrich-like magic. The game’s map isn’t particularly large, but the handful of islands you travel to as Faraday prove to be pretty varied, along with the quick to finish but nonetheless entertaining platforming and combat challenges.

Faraday’s harpoon isn’t only for show as it can play a really useful part in battle, especially in boss encounters. He isn’t too nimble to begin with, so zipping around by locking into enemies is key to beating the hoards of minions the cult tends to throw at you during combat. The boss fights themselves could be considered sort of puzzles in a way due to how they can be utterly dominated if you figure out just the right timing to teleport and hit them really hard with the assortment of weapons you have at your disposal along with the spear, like a shotgun, crossbow and a rapier.

I ultimately found the fighting in Olija to be a lot of fun. Faraday’s attacks have plenty of weight to them, and once you get to the end of a four-hit combo, the oomph with which the last kick or punch connects feels really good, with a Battletoads like screen shake that’s immensely satisfying.

Aside from weapons, you can also equip a variety of hats you can craft in the castaway village between levels. Materials don’t take long at all to gather and it’s worth putting all of them together in order to experiment with and find the one that best suits your play style. One for instance can heal you with each enemy defeated, while another drops deadly acid in your wake during battle, and they all feel pretty useful in their own ways.

The best aspect of Olija though is how uncommitted it is to forcing a story down your throat. Sure, there are a couple of cutscenes here and there that can drone on a bit due to the slow dialog delivery, but the overall narrative is to the point in a way that suits the game’s short running time. There’s enough in Olija for the four hours you’ll spend playing, and at the same time, you probably won’t really want to come back after you’re done.

Sometimes it’s good to get into a game that doesn’t overstay its welcome and can be beaten as quickly as Olija. It’s got very little fat and values the time you spend with it by dropping you into a very tightly designed journey, and honestly I can’t fault Skeleton Crew Studios for how short this game can be if it’s as beautiful and enjoyable as it is. I could think of worse ways to spend the short hours it took to get through Olija, and I’m glad that I did.