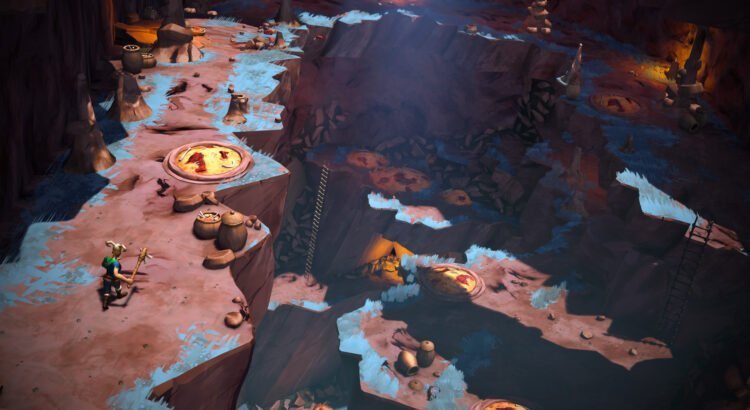 You might have heard of Souls-likes, and you might have heard of Rogue-likes, but have you heard of a Souls-like Rogue-like? Gods Will Fall attempts to mesh these two genres together, with a variety of lengthy and unique dungeons linked together with an overworld. With some memorable bosses supplemented by a lethal variety of monsters, Gods Will Fall has plenty to offer those players who can get over the steep learning curve.

There is a thin story here, or at least a story setup. There was once an ancient tribe worshipped a group of powerful beings, believing them to be gods. However, the gods were cruel and brutal, and ultimately the tribe fought back. A group of soldiers, determined to destroy the cabal of gods whom they had formerly worshipped, are shipwrecked on an island. You’re given control of the disparate group, whom you move as a single unit across the overworld map. There are 10 gods who must be dethroned, each of which is contained inside a pre-set dungeon full of a randomized assortment and randomized difficulty of enemies. If all of your mercenaries perish, it’s game over.

The gameplay is fairly simple. You pick which warrior to control when you venture forth into a dungeon. Each warrior in your party has a strong attack and a weak attack, plus a dodge. You can also parry attacks if you dodge towards an enemy at the right time (not sure why this wasn’t triggered when you attack an enemy while they’re attacking you). There are several jump attacks, as well as the ability to pick up dropped weapons and items to throw at enemies. Most of the combat involves timing your attacks carefully while dodging incoming fire, swinging axes or sword flails. The enemy variety is large and inventive, from stationary plants which will explode if you get too close to skeletal pirates or rotting monsters. The health system rewards you for being aggressive, as health is regained by triggering the Roar ability, which in turn is activated by building bloodlust through defeating enemies.

The goal is to get through the level, successfully defeat the boss god, and escape the dungeon. The more enemies you defeat before attacking the god, the more their health bar will be already depleted. Finishing a dungeon will reward your character with stronger weapons and armour, as well as bonus stats which can make warriors more resilient and deadly. Characters can be both killed or become trapped in the dungeon, and while trapped characters can later be rescued, dead characters stay dead. In a similar vein to the 2019 game Paranoia: Happiness is Mandatory, you are given a group of eight soldiers to complete the game, each of whom has different stats and weapons, from lumbering axemen to nimble sword fighters.

For me, Gods Will Fall’s major issue is its punishing difficulty. I must confess upfront I’m not a regular player of Souls-like games which give priority to lengthy animations, carefully planning your movements and dodging effectively. All enemies are dangerous, even the weaker varieties, and all of them can bring a run to an abrupt halt. For a novice like myself, I regularly found the gameplay a vicious circle of frustration. I’d enter a dungeon with a character, fight my way through until I found an enemy I’d never encountered before, and promptly die after a couple of hits without really learning anymore about how the new enemy worked. The gods can be tackled in whatever order you fancy, but because the difficulty of each dungeon is randomized, there’s no guessing how challenging each one might be.

The game’s art style reminded quite a lot of a game I played last year, Windbound. It has the same painterly aesthetic which merges some cartoon-esque elements into a 3D environment, giving it an almost cel-shaded appearance. It’s fairly pretty and has some nice animation on characters and other environmental elements, while the music is serviceable but unmemorable.

Fans of Souls-likes will certainly get the most of out Gods Will Fall, but I ultimately found the gameplay decidedly one-note and frustrating. I’ve never been one for trial-and-error gameplay (read my review of Rage in Peace for some additional thoughts on that subject) and sadly Gods Will Fall relies on this too often, expecting you to die in order to adapt and survive with a different character. The game would greatly benefit from a more tailored difficulty curve, acclimatizing players to weaker enemies before they get to experience tougher ones. The randomized difficulty manages to successfully mix up dungeons, but can lead to huge amounts of exasperation especially at earlier levels. If you’ve the patience of a saint to be at the whim of the gods, Gods Will Fall is your kind of game.