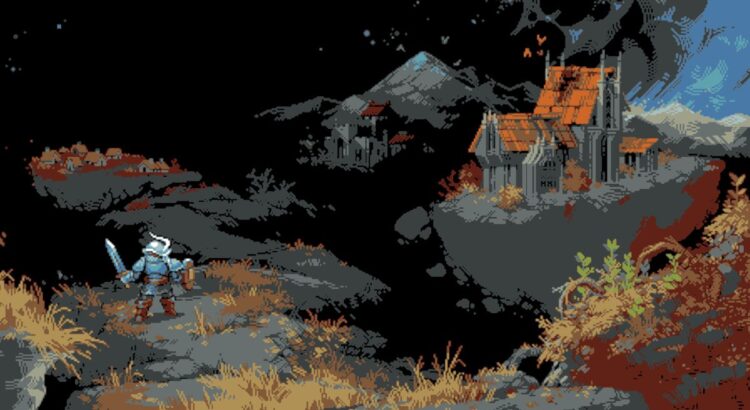 Part Groundhog Day, part Rogue, and part deck-building game, Loop Hero is quite unique within its various genres. The world has been torn asunder by a powerful lich, which has reduced reality to just various fragments of the land, hanging in a black void. It’s your job to try to “remember” reality, piecing it back together while fighting and gathering resources for the remnants of humanity who have survived, before finally destroying the lich once and for all. Loop Hero is an addictively compelling game with a nicely paced difficulty curve, introducing the player to the systems gradually before slowly escalating the threat level.

Your player, the Hero, walks a circular path around the environment automatically (the twists and turns of the loop vary each time you start an adventure). Along the way, they’ll encounter and automatically battle various enemies, from regular slimes to skeleton warriors and vampires. Each time you complete a loop, the enemy difficulty ramps up. You can’t influence these battles except to swap armour and weapons for your character (any items which you’re replacing being destroyed). Once the Hero makes it back to their starting campsite, they’re restored health before they venture forth again. Outside of the battles, you can pause time in order to use an assortment of cards which you collect after slaying monsters. These cards influence the game in various ways and will gradually rebuild the environment, recreating a thriving landscape from what started as a desolate void.

Cards have various attributes that affect the Hero’s journey. Some cards can be placed directly in the path of the Hero (such as a grove of trees) while others must be placed adjacent to the road (such as rocks and mountains). Rocks will add rocks to the hero’s inventory while raising their max HP, while meadows will add food. Walking through a grove will reward wood, but also mean the hero needs to fight a ratwolf. Cards can also have adjacency bonuses, such as placing a meadow next to a mountain, which causes the meadow to blossom and delivers additional food. The various items you collect during your journey can then be used later on to build structures at the campsite, where the rest of the survivors are located. These structures follow a tech tree and not only advance the story, but provide various bonuses for when you start a new expedition. You gradually unlock new cards which you can swap in and out each time you start an adventure, to make a journey more challenging or rewarding.

Overall Loop Hero’s gameplay is superb, and an quintessential example of a game which is easy to pick up and play, yet difficult to master. Although your influence on the Hero’s loops is limited, you need to make various tactical decisions such as what armour or weapons to upgrade to, what bonuses to activate, where to place cards along the path, and when it’s best to make a tactical retreat. Dying during a loop means losing a substantial portion of your inventory, while retreating anywhere other than the campsite means losing 40%. Only at the campsite can you safely take everything with you, meaning you’ll be willing the Hero to survive their next few encounters until they can safely return to camp.

Artistically the game is very much attempting to emulate the style of late 80s/early 90s PC games like SimCity original; if you’re familiar with games such as the team’s previous title Please, Don’t Touch Anything or Lucas Pope’s Papers, Please you’ll get the feel of it. It has a really crisp and appealing presentation and helpfully includes an option to display all text in dyslexia-friendly cleaned up fonts. There is also a superb soundtrack; chiptune music is almost passé these days but Loop Hero‘s soundtrack is irresistibly catchy and naturalistically changes themes as time progresses, each tune memorable enough to be worth listening to independent of the game.

The more I play of Loop Hero, the more depth it continues to unearth. There are several game chapters which mix up how each loop will unfold alongside advancing the story, as well as a variety of different character classes which can radically change gameplay. The Warrior is the default class, but later on the Rogue will gather trophies rather than individual pieces of armour and weapons which can be traded in for equipment at the campsite. All this variety means that even on expeditions that end in death, you always feel like you are making some progress towards your next upgrade. It doesn’t naturally fall into any single genre, but Loop Hero is a satisfyingly rich experience, and you don’t have to be a Roguelike masochist to enjoy it.