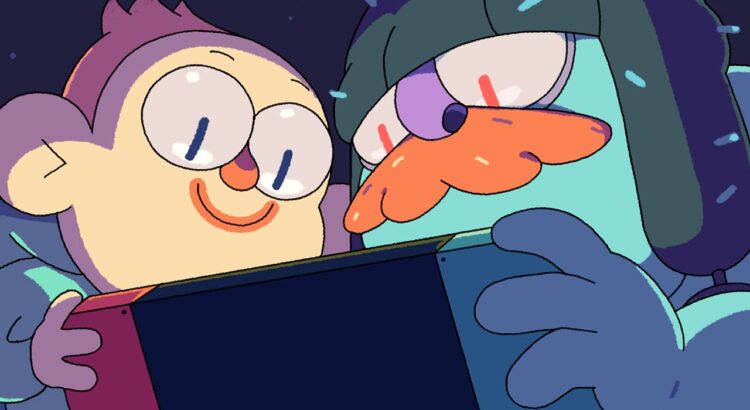 It feels like ages since the last time I played one of Capy Games’ releases that I’ve enjoyed as much as Grindstone. Back in 2009, Might and Magic: Clash of Heroes was my introduction to the studio, and I was completely addicted from day one. There’s just something to their design sense that really pulls me in, and hey, I’ll admit that I’m a sucker for color match puzzle games. Add to that a really beautiful art style, a little bit of story and plenty of depth to keep me coming back, and you’ve got me good.

Grindstone has similar hooks to Clash of Heroes, but since it’s a port of an Apple Arcade game, you can expect to see a much more pick up and play experience here, with much shorter spurts that work as something you’d play between sittings when fiddling around with your iPhone. In it, you play as Jorj, a burly warrior turned family man who seeks fortune in the titular Grindstone Mountain, who legend says holds many riches for those who are strong and most importantly, smart enough to get to them.

Even if you don’t have any experience playing color match games, you’ll find that Grindstone is pretty darn easy to learn. Gameplay takes place on a grid, and every square is occupied by something, whether it’s a grub, an item, a rock, or whatever. You start every level at the very bottom of the board and slash your way up and around it by sliding color combos and defeating loads of monsters. You can only move by lining them up by the same color, and the more of them you manage to stack up, the stronger foes you can knock out, or have access to things that drop in from the ceiling, like chests and piles of loot.

And loot you’ll need to make headway into Grindstone. There’s a ton of crafting and grinding for mats (which include grindstones, the most valuable of gems, of course) at every corner of the game, true to its phone game origins. You craft equipment to put to use during fights — like shields and weapons with different ranges of attack — as well as items to buff you up or even heal you. Every single one of those can only be made by finding schematics and recipes during the regular course of levels, of course, giving you reason to keep coming back for more. This constant progression feels good as it provides reason to keep playing and at the same time getting to some of Grindstone’s greatest challenges, which are definitely worth the effort, as they’re a lot of fun to conquer.

This wouldn’t be a Capy game if it didn’t have a really distinct art style, and in that regard Grindstone certainly does not disappoint. It takes obvious cues from more modern Cartoon Network shows like Adventure Time, with extremely colorful and exaggerated character designs that have a lot of personality and flavor to them. Grindstone is not a kiddie game by any means because of that, though, since there’s guts flying everywhere all the time, but the chaos that ensues is so cartoony that I wouldn’t have a problem letting younger family members play this at all. Then again, Grindstone’s art might not be everyone’s cup of tea, and if you abhor its aforementioned inspiration, you’ll certainly find this somewhat unappealing, at least visually.

Still, you’d be doing yourself a huge disservice if you didn’t give Grindstone a go just because of its presentation. There’s a fantastic puzzle game to be had, and regardless of the fact that the Switch eShop is constantly flooded by similar in concept puzzle games every week, Grindstone is unique enough on its own and has enough to keep you busy for a long while. It does nothing to hide the fact that it’s a game that demands you to keep playing on and on, but differently from the rest, it rewards you for your hard work. Its arrival on the Switch makes for an excellent excuse to dive in if you don’t own an iPhone, and the move to JoyCon controls don’t lose much to the touch inputs you’d find on Apple’s device. If you enjoy a good puzzler, you can’t go wrong with Capy’s latest hit, trust me.