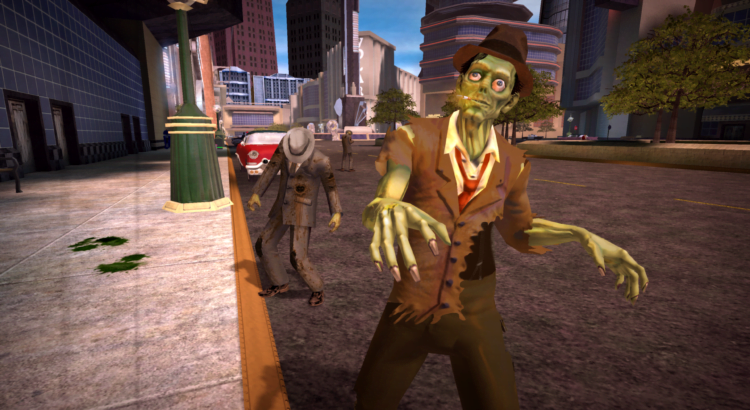 If there’s one thing that really brings me down is finding out just how wrong my nostalgia for things can be. Case in point Stubbs the Zombie: Rebel Without a Pulse. Without a doubt one of my favorite original Xbox games in my memory +15 years later (damn, it’s really been THAT long, hasn’t it?), getting to play it again thanks to Aspyr’s recent re-release on modern consoles really drove home just how much games have evolved, and at the same time, how much my taste in them has changed over the course of a trio of console gens.

Where to begin with this? Well, in 2005 I was really into open-world games, or the notion of what was considered open back then. The Grand Theft Auto games from the PlayStation 2 era were still very much in vogue, and practically every development studio was trying their hand at putting out their own flavor of run-around-destruction games. And I had a blast playing through most of them. Pandemic Studios’ Mercenaries: Playground of Destruction was among some of my most beloved Xbox games, along with Destroy All Humans!, and in my memory at least, Stubbs the Zombie was also one of those.

As the recent remake for Destroy All Humans! proved, nostalgia can be a fickle mistress, but I was still able to get some enjoyment out of that game, especially because of some of the improvements that came with the remake. In Wideload Games’ Stubbs the Zombie’ case, however, given that it’s not one, but a straight up port with no real tweaks and some wonkiness to boot, it’s clear that the rose-colored glasses effect truly exists.

In many ways, Rebel Without a Pulse hasn’t aged well at all. But I’ll get the few positives out of the way first. The conceit of the game is ridiculously dumb and campy (in a good way): you play as a recently brought back to unlife zombie in a 1950s futuristic utopia where robots do all the work and humans are as dumb as they come. A billionaire inventor and his extended family are in charge of everything, and it’s your job to ruin every last bit of it. The humor in Stubbs is definitely out there, and plays into the core part of the overall gameplay, as you munch on brains and build up an army of ghoulish followers.

Then again, that’s pretty much the gist of this game. You eat brains and fumble your way through small groups of humans in big open sparse environments as you try to figure out how to get to the next section of your aimless adventure. It’s not unfair to call Stubbs the Zombie that, because there’s not really anything pointing you to wherever you need to go without any control whatsoever over the enemies you convert into zombies outside of whistling them over, which they rarely end up doing. You just keep wobbling forward and hope for the best, and for best, I mean the game deciding to load the next area’s equally populationally limited zone.

As the supposed leader of the undead, protagonist (antagonist?) Stubbs starts out only able to clumsily hit enemies and eat their brains, but it doesn’t take too long until new abilities start popping up. Conveniently enough, our friend’s open abdomen provides a limitless number of explosive organs that you can rip out and lob at humans, and the same goes for this arm, which after a certain point can be used to mind control humans to do your bidding, or even his head, as also an explosive, but tossed as a bowling ball. He can also fart, which can be amusing the first time you put it to use, but is not nearly as powerful as the rest, only making enemies dizzy and susceptible to getting their brains chomped for a few moments. Annoyingly, though, these powers only reload when you eat brains and not over time, so combined with the fact that you’ve got a very weak constitution (you’re a zombie, don’t forget that!) and your minions don’t at all behave like minions, you’re forced to play very conservatively.

Given that the game takes place in the 1950s, you’d think there’d be a lot of excuses to make fun of that time period. Well, compared to Destroy All Humans!, which frankly went way overboard with references to the Cold War and all the paranoia surrounding it, Stubbs goes to an even sillier and shallower place, instead relying on making humans even stupider, with humor I’m not at all surprised to find I found amusing at 19-20 but that I’m fairly over at my age now. It’s low-brow cartoonish, really.

Now, I totally misremembered it, but I recalled Rebel Without a Pulse having more going for it in the in-game music department when it was originally out when playing this often silent port. After checking out some videos recorded of the original version, that was totally the case for Stubbs the Zombie back then too. There’s practically no background tunes to speak of during gameplay, and outside of the extremely repetitive grunts, death wails and screams you get when playing and eating brains, the game’s almost silent.

Considering that it’s supposed to have some excellent “modernized” renditions of some classic 1950s tunes such as Lollipop, Earth Angel, and Mr. Sandman by bands like Death Cab for Cuties and The Raveonettes (trust me, I had to look these names up), it’s a real shame that Aspyr didn’t try to include these during actual gameplay somehow. Outside of one instance where the game tries (and badly fails) to throw in a rhythm minigame, you won’t hear any of those songs outside of the credits.

So unless you’re like me and were dying (get it, dying?!) to get to play Stubbs the Zombie: Rebel Without a Pulse again somehow, you’ll be better served with other re-releases/remakes of games from that period or close to it on modern consoles, like previously reviewed Destroy All Humans! or if you don’t mind me cheating and fast-forwarding a bit, Red Faction Guerrilla. There’s much more to those than the one sad track Stubbs sticks to as it drags itself the whole way through.