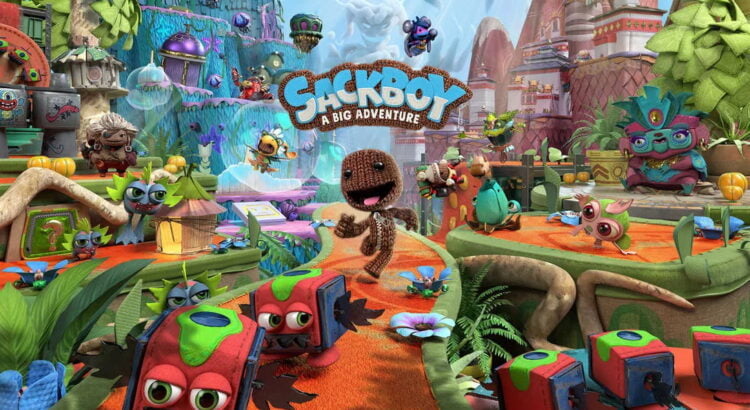 Sackboy: A Big Adventure feels like something that came from an alternate timeline where big-budget studios (other than Nintendo) were still regularly making platformers instead of only creating blockbuster prestige games. Not in the sense that it feels like something from a particular era of games, but rather that it feels like an example of what we’d be getting more often had platformers still been one of the genres to make games for.

Sackboy is a LittleBigPlanet spin-off that takes the titular Sackboy and puts him in a traditional sort of Mario-esque level-based platformer. Hardly an original idea, sure, but a welcome sight given how much of Sony’s output for the past decade has been dominated by the same ideas of what “prestige” entertainment looks like but applied to videogames. Sackboy isn’t anything particularly remarkable — it’s a fun, well put together platformer with a lot of charm, just one of many games of this sort to fit that bill. It’s everything you’d expect out of a platformer in just about every way, such that you probably already know what you’re in for if you’ve played any number of similar games — and that’s not a bad thing! Having not played a traditional platformer like this in some time (not for any particular reason, I just… didn’t get around to playing any in a long while), Sackboy was, if nothing else, a nice reminder of how much fun a good platformer can be.

Sackboy: A Big Adventure follows Sackboy on his quest to save Craftworld from Vex, a villain who seeks to enslave all of Craftworld’s inhabitants and remake it in his image using a device called the Topsy Turvy. Where Craftworld is all about expressiveness and creativity, a vibrant and colorful space, Vex wants to turn it into the exact opposite: a dark and sinister world ruled by fear. Sackboy, being one of the few people to escape Vex’s grasp, is thus tasked with stopping him. If you’ve played through the stories of the LittleBigPlanet games, a lot of the broad strokes will feel pretty familiar. Like its predecessors, Sackboy‘s story is very squarely in the family-friendly sort. It’s very silly and has plenty of charm, but it’s nothing particularly deep. Biggest change from LittleBigPlanet is that Sackboy has a touch more production value in its storytelling, with proper cutscenes and the like, and a slightly more involved plot.

The basic structure of Sackboy involves collecting “dreamer orbs,” the game’s equivalent to something like stars in Mario. Each level has a handful to find, usually placed in obvious spots throughout each level, such you can easily clear most levels with all the orbs collected for the first few worlds without even trying. They can be hidden pretty well when they want to, though, the ones in late-game stages often require a fair bit of work to find. Instead of just being hidden just out of sight, they often require very specific interactions to uncover, such as one example that involved throwing enemies or objects at certain parts of the environment. I thought I was being rather thorough in combing over each inch of a level on my first run through, but even then I often finished with multiple orbs left to find still.

Levels themselves are presented via fixed camera angles, often swapping from a slightly isometric perspective to a side-scrolling one as needed. For as reviled as fixed cameras are (they’re good, actually), they do they’re job well here, providing a good view of the area that always ensures you can properly judge the length of any gaps you need to cross. It’s a step up from LittleBigPlanet‘s platforming, which was serviceable at best. The floaty jump physics in that game made everything feel just a touch off, each leap never feeling like it gained enough height to make it across whatever gap lay in front of you. LittleBigPlanet wasn’t one to throw a bunch of difficult jumping sections at you, of course, but that only exacerbated how off it felt as even the most simple of pitfalls weren’t easy to cross with confidence. There was always some worry whether I’d actually make it, even if I knew I should be able to, because it felt just weird enough to keep it from feeling good.

Sackboy thankfully avoids this. Movement feels good. Sackboy leaps everywhere with the immediacy and air-time you’d want and expect. There’s no longer that feeling of uncertainty. I was always able to run and jump around with no concern for whether I had enough air time or not (barring the many occasions where I screwed up and met my demise, of course). Extra moves like being able to briefly flutter in the air following a jump for additional air-time or lunging forward to get that small boost you need to close the gap help a lot in making Sackboy feel more well-rounded in his abilities. Which is good because Sackboy can be surprisingly difficult at times and every little bit helps.

For as easygoing as most of its levels are, when Sackboy decides to ramp up the challenge, it goes for it. Oftentimes it’s due to the game throwing a bunch of enemies at you while also having you avoid some sort of stage hazard, such as being fired upon by ships that are flying alongside whatever transport you’re taking (sections that feel like they’d be much more manageable with another player or three in tow), but occasionally it’s just a matter of being asked to perform very precise jumps (the late-game levels in particular are especially demanding in this regard). In the case of the former, it exemplifies combat as one of Sackboy‘s weaker aspects. It’s not terrible, but it’s not great either. Sackboy’s punches have extremely limited range, making them prone to just barely missing your target. And while the fixed camera angles generally provide a good view of the area, they do sometimes make it difficult to tell whether you’re lined up correctly when trying to jump on top of an enemy to vanquish them. Most of the time these are just minor annoyances, but when you’re trying to fight while also avoiding general stage hazards, any sort of uncertainty doesn’t feel great.

Granted, difficulty in this specific case only really applies if you choose to engage with it. If you’re just trying to clear a level and move on, any sort of difficulty spikes are nothing but minor setbacks as checkpoints are frequent and extra lives are pretty easy to come by. So unless you’re trying to “ace” a level (finish it without dying) or trying to hit the point thresholds to unlock extra costume pieces, which sometimes doesn’t leave much room for error given how many points can be deducted from your score upon death, failure is more or less moot.

The time trials, on the other hand, are one of the better examples of challenge. Barring the occasional auto-scrolling level, moving through each stage at your own pace makes it pretty simple to get through them with little issue. Trying to barrel your way through it quickly, however, not so much. In any scenario where you have to race against the clock, it’s paramount that you can get around quickly and have it be worth engaging with. Sackboy doesn’t have a whole lot of tricks up his sleeve, but he can get around rather quickly with the right moves. By rolling around, he can pick up a good deal of speed. Larger gaps can be crossed by fluttering in the air then lunging forward to gain just that extra bit of distance needed to make it across. Chaining these actions together in any typical level is already satisfying, but in the time trials especially they demonstrate how good the movement can feel when pushed beyond the game’s usual relaxed pace.

It almost reminds me of Rayman Origins and how that game could effortlessly turn any of its levels into a thrilling race thanks to how easy and fluid it felt to move. Gliding through levels that you previously explored carefully and thoughtfully in a single motion is endlessly satisfying. Sackboy may not quite hit those precise heights — Rayman Origins had a certain fluidity to it that Sackboy doesn’t come close to matching — it at least hits close to the same notes regarding how fun it can be to run through a level as fast as possible. Wish more of the time trials had been set in actual levels rather than just being their own self-contained stages, but what’s there is enjoyable all the same.

Best thing I can say about Sackboy is that it got me in the mood to play a lot more platformers. I always like any game that makes basic movement fun to perform and platformers are generally the best games for that. Sackboy may just be a Good One of Those, though that doesn’t diminish how fun and well-executed it is and I’d be lying if I said I didn’t have a great time with it. It’s a charming game and a delightful time all around. Definitely something worth checking out if you’re in the mood for some good ol’ fashioned platforming.