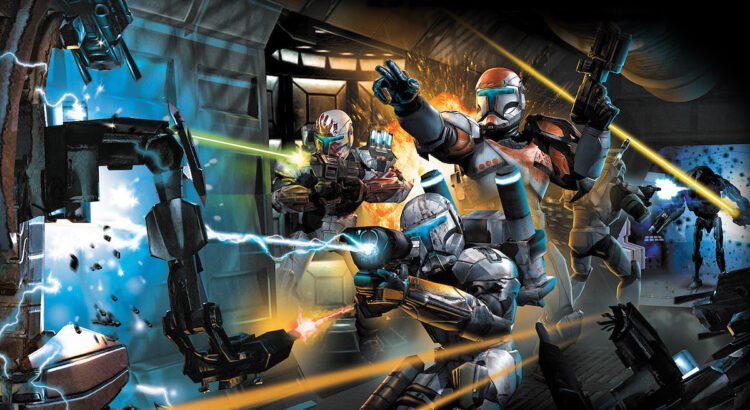 Say what you will about the prequel trilogy, but some of the best licensed Star Wars games came out during the early 2000s. One of the best was 2005’s Star Wars: Republic Commando, which put you in charge of an elite group of clone troopers, who were first introduced in Star Wars Episode 2: The Attack of the Clones, right in the middle of the ill-fated Clone Wars.

Republic Commando was warmly received and eventually became a cult classic thanks to its innovative squad gameplay and fantastic atmosphere, taking you into all the hotspots of the prequels, like Geonosys and even Kasshyyyk, all well as a Star Destroyer-like starship that’s taken over by mercs. It’s a great game for the time and its fame is well deserved as this latest re-release proves; while not the best looking shooter out there, Republic Commando is still very much worth playing in 2021, especially so if you’ve never checked it out before.

Aspyr has been on a roll with re-releasing old games for the past few years, and like the recent Stubbs the Zombie: Rebel Without a Pulse and what’s still my hands down favorite Star Wars game ever, Star Wars: Jedi Outcast, Republic Commando is a pretty straightforward port of a 15-year old game with little to no fluff whatsoever. What you’ll get here is a version of the game that runs on modern consoles and trophy/achievement support depending on which one you end up picking it up for. In terms of performance, the PlayStation 4 version that was supplied runs serviceably, but there are reports of the Switch port suffering from some performance slowdown.

For anyone with a little experience playing tactical squad games, Republic Commando might feel a little simplistic and limited, but for what it does, it plays extremely well. As a clone, you’re put in charge of a squad of three other elite troopers, each specialized in a certain skill — a demolitions expert, a hacker, and a sniper. You can order them around depending on the context sensitive obstacles you run across, and it’s really straightforward with how you get them to work, just aim your gun and at the press of a button they’re off to the races. There’s also a selection of extra formation orders you can assign them to, as well as tell them to sweep ahead, stick to a specific spot, or come back to you.

What makes Republic Commando special is the setting, really. The entire presentation, especially in 2005, really sells the show that you’re part of the war effort during the prequel movies, for as doomed to failure as it eventually proved to be. You get all the classic music cues and sound effects, as well as the visuals, including a quick swoop by Kamino as the game opens up and you’re brought out of the cloning tank. It’s all done surprisingly well and immersively, or as immersive as it could be back then. Still, it’s fan service that you’ll eat it up even if it looks blocky these days.

The idea of playing as or watching media where the clone troopers are introduced as individuals is nothing new to audiences these days, with cartoons like Star Wars: The Clone Wars and the upcoming Star Wars: The Bad Batch show on Disney+, but the concept was really novel back when the game originally came out, and it succeeds at building a personality for each member of your team, for as short as Republic Commando can be, with each level lasting around an hour.

It’s certainly not easy being a Star Wars fan, but games like Republic Commando are a good reminder that in the right hands the franchise can render great experiences. LucasArts was at the peak of its existence in 2005 and this game is one of the last and best products to come out before it all imploded. Even though this port might not be the sharpest or the most content rich out of remasters out there, it gets the job done. If this is your first time hearing about this game, don’t miss out.