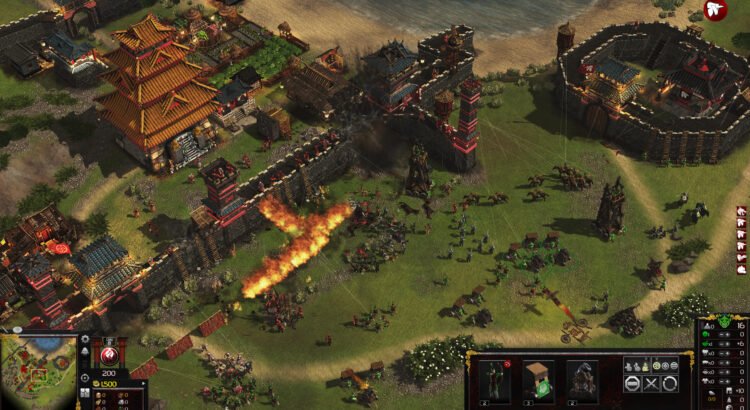 It’s a well-worn saying that success can be both a blessing and a curse. For the small British developer Firefly Studios, this has been true of their flagship Stronghold series. The original game in this venerable franchise was released in October 2001, and became a million-seller which provided Firefly – then a newly-founded outfit – with financial stability. However, Stronghold has also proven to be something of a millstone around the company’s neck. Repeated attempts to break away from the series over the years have met with failure, compelling the team to produce a long sequence of sequels, updates, and re-imaginings of their original hot property. Their castle-building strategy series has become as difficult for them to escape as an expertly-made medieval dungeon.

For over 20 years, relatively little has changed in Firefly’s approach to the series, as its core mechanics were well-established by the first instalment. Warlords is, depending on how you count, the eighth distinct game in the series. Its distinctiveness is quite modest, however – this time around, Firefly bring relatively little that is new to the table, outside of settings in Asia and a dubious “warlords” concept from which this entry takes its name. Truthfully, nostalgia is the biggest plausible draw to the game and its potential to win new converts is limited.

The original Stronghold was genuinely novel upon release. Its principal selling point was an intriguing fusion of two related, but distinct genres – the city-builder, and the real-time strategy. At the time, the RTS was just coming down from its frenetic 1990s heyday, when new hits were being released seemingly every other week. While Stronghold had numerous elements in common with games being made by big hitters like Westwood and Blizzard, it stood out due to its inclusion of city-building elements. In this game, success depended not only on amassing an army but also on managing a sophisticated economy behind the lines, and constructing elaborate fortifications behind which peasants could cower, away from the mud and blood of the battlefield.

Crucially, Firefly also added what has been a tremendous asset to many of the best British games over the years – a rich and anarchic sense of humour. The game makes few pretensions to historical accuracy, but relies on bizarre characters with animal epithets like “The Pig” and “The Rat”. As the population responds positively or negatively to their liege’s actions, a memorable adviser reports with a number of quotes which are seared into the memories of experienced Stronghold players. All the while, combat in the original game is relatively simple, with few unit types – but watching an enemy’s cherished castle crumble before their eyes is intensely satisfying.

In gameplay terms, Warlords replicates almost every element of the original game and its much-loved sequel Crusader. If anything, this new instalment seems too similar to its forebear. This is arguably the game’s critical weakness – it makes a poor justification for its own existence, when the early games are dirt-cheap and still play very well indeed. In determining the worth of Warlords, what matters is what is missing from the older games, and what has been added this time around.

Most obviously, Warlords explores a new Asian setting. Specifically, the five combat campaigns and one economic campaign are set in Vietnam, Japan, China, and Mongolia over the course of hundreds of years of history. While this gives a refreshingly different look to the game’s units and particularly its buildings, there aren’t multiple fleshed-out factions. Instead, the differences between commanding armies in ancient China and during the rise of Genghis Khan is achieved mainly by restricting the player’s access to units which are all available in skirmish or multiplayer. Partly for this reason, the campaigns don’t feel well differentiated. Unfortunately, the game lacks a distinctive atmosphere – the lovingly created briefing screens are impressive, but the muddy landscape textures and the fact that all factions speak only Chinese deflate any potential sense of immersion.

Warlords also suffers for the fact that its blithely unreconstructed gameplay mostly dates back to the glory days of 2001. The simplistic units, which tend to lack special abilities or interesting characteristics, were more forgivable in a 2D game 20 years ago than they are today. The game’s basic objectives, fussy building placement and sometimes opaque economy are also relics of the series’ distant past, while the graphics feel only minimally modernised. The Asian-styled fortifications and temples look good, but the natural environment is much less impressive and it’s easy to yearn for the detailed sprite work of the earliest Stronghold games.

As alluded to earlier, Warlords takes its title from a new gameplay mechanic. A “warlord” is essentially a leader of an initially neutral faction, and his small retinue based around mini-castles dotted incongruously around the map. These factions present no strategic threat, but can be captured by force or won over through the expenditure of “diplomacy points” which are generated by specific buildings. Once under control, the warlords can be set to provide one of a number of resources in regular instalments. Frankly, this concept seems ill-considered and adds little to the game outside of a new layer of micromanagement.

The warlords concept reflects the deeper malaise affecting the Stronghold series – new concepts are thin on the ground, and this entry seems content only to relive old glories. Established fans of the series will likely find something to like here, and Firefly seem keen to support the game in the future, but the enduring lure of the older games may still be stronger – at least for now.