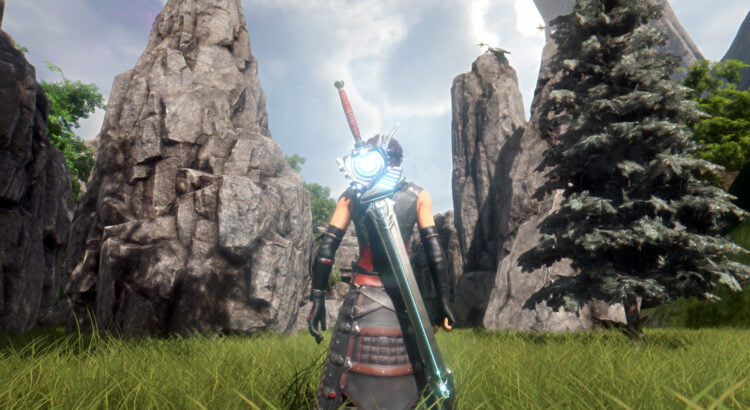 French developer Midgar Studio‘s Edge of Eternity is proof that with plenty of passion and talent behind the wheel, you can get an ambitious project off the ground and get it going given enough time and budget. The game’s been out on Steam Early Access for quite a while and has only recently released its final build, showing off the small studio’s impressive outing of a very familiar style of RPG.

To those unaware, Edge of Eternity is a turn-based J-RPG in the mold of Final Fantasy, most especially Final Fantasy XII, introducing MMO gameplay aspects into a purely single player adventure. The comparison to Final Fantasy is obvious from the very get go, but Edge of Eternity manages to carve out its own path somewhat thanks to some clever twists to its combat system, not to mention its story, which is surprisingly dark and has lots of depth.

Heryon is a world that’s seen its share of conflicts. Ever since an alien force made its presence felt from orbit, things have been quite hectic for its denizens. At first, they were quite friendly, but it all quickly soured, forcing humans to fend for themselves as strife after strife is delivered upon them, the worst of them is the Corrosion, a deadly disease that is seemingly incurable.

That’s where Daryon comes in, a soldier who is part of a plucky platoon, part of the defense force against the invaders. Upon receiving a letter from his estranged sister letting him know that their mother has contracted the Corrosion, he’s torn whether or not he’s to commit desertion. In a twist of fate, however, his entire group is taken out by the enemy, and after witnessing a bizarre sacrificial ritual, he ends up having his decision made for him.

An hour into the game, I was surprised with how my first impressions about it turned out to be wrong. The introductory sequence to Edge of Eternity, which I just described above, aside from the actual events that transpire, inspired little to no confidence in me given that the presentation, especially the graphics, animations and play to play, which were quite shody.

But as soon as the game broke away from the prologue, it quickly started to grow on me, thanks to the surprisingly good character development that starts to take place from chapter one forward, not to mention the simply gorgeous and lush environments you get to explore, a far cry from the snowy and monotone setting from the beginning.

That, combined with a very Final Fantasy XII-inspired grid system for character skills that allows you to respec when needed, as long as you have crystals of the right color to equip — and they drop abundantly throughout the game — as well as the fast paced combat, kept me engaged for a while.

It would be easy to cast Edge of Eternity as a mere clone to Final Fantasy XII, but that would be too demeaning to the work done by Midgar Studio when it comes to that particular part of the game. Fights take place in hexagonal grids that let you freely move around and gain advantages during encounters that take place in turns guided by a very familiar Active Time Battle system (aka ATB). Not only that, it’s also a good idea to make use of structures that pop up from time to time within that grid, like ballistas that you can fire off and damage enemies during encounters. It’s a fun combat system that doesn’t waste any time getting you in and out of battles, which is awesome considering how meandering they can get in a game like this.

Another part of Edge of Eternity that makes it feel like an MMO just like Final Fantasy XII did back in its day is the entire quest system that includes a number of fetch and hunting missions that come in handy when it comes to leveling and upgrading your equipment. The latter also plays a part during combat, where special objectives pop up that when met, can reward you with some very good loot. Then again, if you fail these, you can always craft new weapons and gear as long as you have enough mats.

I’m anxious to jump back into Edge of Eternity as soon as the content backlog dies down a bit in the coming month. I was surprised with just how much I enjoyed my time playing it, for as close as it seemingly sticks to its inspiration. Admittedly, there’s a lot of competition in the Steam marketplace for J-RPGs, but I hope it’ll get the attention it deserves as it’s now out of Early Access and in the wild. Its own unique touches to familiar concepts from one of my favorite entries in Square Enix’s most traditional franchise didn’t go unappreciated and are the best things going for Edge of Eternity for sure.