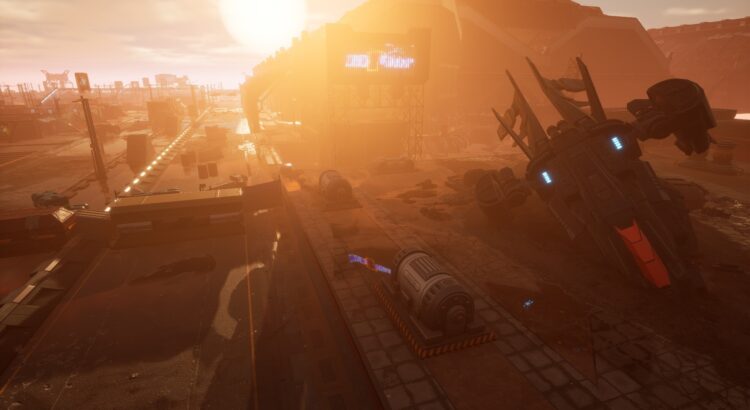 Mars has long been a great setting for many video games, from the classic Red Faction to the perennial favourite Doom. There is something about the red planet that is fascinating, be it ripe for colonisation or be it home to enormous bug-eyed monsters. Red Solstice 2: Survivors is the sequel to 2014’s The Red Solstice, and is an interesting hybrid of a game, merging an overworld, XCOM-style management game with an active dual-joystick shooter during missions. This formula is interesting and is mostly successful, but repetitive mission variety and poor AI can hamper enjoyment.

The game is set in AE (After Earth) 117, when the Earth was evacuated due to the uncontrolled contamination of STROL; a mutant form of life which infects every living thing it encounters, and can resurrect dead flesh in a similar manner to Necromorphs in Dead Space. You play as the Executor, a high-ranking, genetically-engineered colonial Martian who is awakened as the STROL infection has completely overrun the Tharsis colony, meaning after a tense opening tutorial, you obliterate the site using an orbital laser. From here your mission is to prevent the STROL infection from spreading further, by taking a variety of missions across the entire Martian surface. There is a plot but it definitely takes a backseat, with most of the lore being explained via the handy archives area on the world map screen.

The missions are played from an isometric perspective with a controllable camera to allow you to zoom out and pan around. Maps are pretty enormous, and most missions have a variety of side objectives that pop-up, granting you more equipment and personnel should you complete them. You directly control the Executor, but your remaining party members are AI controlled. They can be ordered to do certain things, but they have a habit of wandering into trouble when you’re not looking. Enemies will continually attack your party in a wave-based format (although you normally won’t be able to notice when one wave starts and another begins) and will seek out your soldiers no matter their location. Combat is real-time and can be played passively or actively, by either enabling Overwatch on your character so they automatically fire at enemies, or by taking direct control yourself. There is also the option to swap to an alternate fire weapon, which is more powerful but has more limited ammunition, which is very useful for clearing out large groups of enemies should you find yourself surrounded. The enemy variety is enormous but the tactics for taking them out don’t vary particularly.

Speaking of which, staying on the move is vital for staying alive in Red Solstice 2. While moving around the map, you’ll still regularly encounter mutants but as you’re always going somewhere, it’s not too difficult to avoid yourself being backed into a corner. Completing an objective at a particular location can be the cause of many problems however, as this is when the game loves to throw a huge cluster of enemies at you, and as your player character is usually busy finding supplies, reconnecting power generators or doing whatever, it’s down to your AI compatriots to keep back the horde. Up to a point they can do this, but they need regular back-up from the special abilities the Executor can provide. These include grenades, which are infinite but operate on a cooldown, or better critical shots for a time. You always start out a mission with no points assigned to your abilities, but gradually can upgrade them as you kill more mutants and complete objectives. If your squadmates die, they can be revived a certain number of times to fight again in subsequent missions, but if they die too much they will be permanently killed. Alas, your squadmates are fairly prone to signing their own death warrants by walking into unwinnable situations. You can however play the game cooperatively with friends, which would negate some of the AI problems.

While the missions are the main draw, there is also an XCOM-style management level to the game as well. Between missions you operate your dropship, flying over the Martian surface and picking which missions you want to tackle. You can also outfit your Executor with new and upgraded equipment, as well as assign skill upgrades to your squadmates. The squad management is fairly simplistic but works well enough. There is also a research mechanic which functions very similarly to XCOM, unlocking new weapons, skills and upgrades for your troops to make them more effective in battle. Again in the same style of XCOM, there is a doom tracker which monitors the STROL infection level across the planet, and allowing it to get too high will bring a premature halt to proceedings. Problems arise after you’ve done a fair number of missions, as objectives tend to repeat while the difficulty spikes surprisingly quickly.

Stylistically the game looks great and levels are very atmospheric, the ruined Martian colonies overrun with hideous monsters, the dark shadows and industrial designs of the buildings creating an ominously imposing atmosphere. When you’re running away from a horde of creatures who are swarming towards you with only a flashlight for company, it can look very impressive. Overall, Red Solstice 2: Survivors has a decent core and it’s certainly possible to have some good fun, but is sometimes let down by its spotty AI and repetitive missions. Very few games have quite the combination of elements which Red Solstice 2 offers, making a consistently interesting experience.