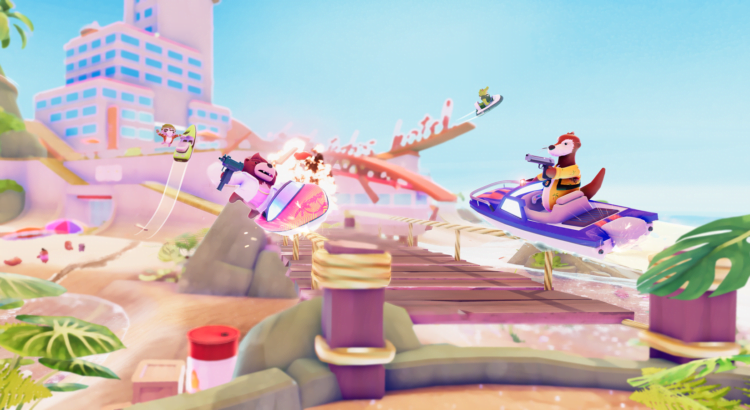 Part GTA, part Tony Hawk and a whole lot of Wave Race 64, Wave Break is one of the nuttiest concepts on paper you’re likely to run into this week on the Switch eShop. From developer Funkatronic Labs, Wave Break has a lot going for it, and while it certainly succeeds in many of them, there are certain omissions that keep it from being as great as it could’ve been.

Wave Race 64 was the very first game I ever got for my Nintendo 64 back in the day, and even decades later, I still consider it one of my top carts for that system. It was a quirky game that had no business being as good as it was, but heck, it ended up being a whole lot of fun. Wave Break isn’t nearly as thorough in emulating the feel of riding a jet ski, but it still plays well in that regard, thanks to the suitably loose control scheme that manages to throw in a more complex trick system than Wave Race‘s.

That’s where the Tony Hawk-ness of the game comes in, not only through your ability to pull off stunts off of ramps, rails, and walls, but also via the entire objective system that the missions in Wave Break hinge on. It’s initially a little awkward to play due to its pulled away and slightly angled camera viewpoint, but it starts to settle in after a while.

My main issue with this being a game so focused on having to rack up points and throw some variety to your repertoire is that there’s no way of checking out a trick list while playing. Sure, anyone familiar with how any of the Tony Hawk’s Pro Skater games play will instantly get how Wave Break works control and even gameplay-wise, but the uninitiated folks might find it annoying to have to randomly try combinations or remember any inputs, especially considering that there are a whole lot of them.

Then again, we’re not talking about a hugely complex game here. You’re riding a jet ski as a gun-toting 1980s dressed teddy bear, after all. Right, yeah, you get what this is going for, I bet. 1980s nostalgia isn’t anything new at this point, and while Wave Break tends to, well, break convention by having more modern songs in its track list than the time period would allow — with relatively new bands like Weezer dropping by — the whole neon pink visual flare is certainly there.

Considering that GTA Vice City is perhaps my favorite entry in that series, I’m totally okay with this aesthetic, for as played out as it’s become in games for a while. Then again, it’s cool to see a slightly different take on it through the way that Wave Break styles some of its missions, giving you objectives you’d likely expect to run into while playing a proper GTA than a THPS trick-a-thon like this, sometimes even splitting them into multiple sections, which adds an extra layer to an otherwise very limited set of levels, totalling at 4.

Wave Break is an eclectic mix of different styles that is almost a guaranteed recommendation on the Switch. It’s a colorful game that’s sure to please anyone looking for a quick pick up n’ play download. But given that the eShop is already packed with similar bite-sized titles, I imagine it’ll be hard for it to set itself apart in the long run, for as nutty as its premise can be.