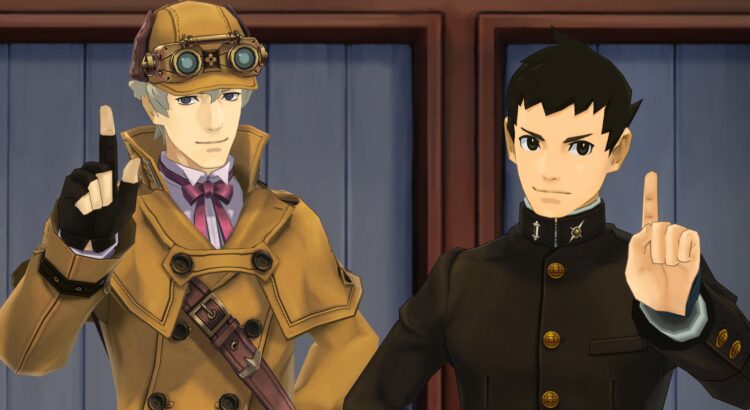 For a while, it seemed that we would be getting a new Ace Attorney game every year, thanks to fantastic releases on Nintendo DS during the late 2000s and early 2010s. Those, at the outset, were ports of older GameBoy Advance titles previously only released in Japan, and their fantastic localization helped cement Phoenix Wright as an up and coming and generally very successful franchise for Capcom. It even prompted our favorite lawyer to be featured in a fighting game, of all things, as he made his case on Ultimate Marvel vs Capcom 3.

Since then, it’s been years since a new Ace Attorney made its way to any system, only with a handful of ports for phones and the follow up PC releases of them on Steam. Thankfully, Capcom is once again making an effort to release more games in the series, and although it’s a port of its own of a Japan-only Nintendo 3DS game from 2015, The Great Ace Attorney Chronicles is a more than welcome release on PC, PlayStation 4, and Nintendo Switch.

Greatness always has humble beginnings as this time we’re dueling in the courts of the late 1800s, with the game opening shortly after the nation of the rising sun had signed a cooperation agreement with the British Empire. Timid young aspiring defense lawyer Ryuunosuke Naruhodo — a fun play on Japanese that last name! — sees himself tried for a crime he didn’t commit, having to defend himself in a court of the newly implemented justice system for Japan. It’s a fantastic setting for the long running series, and as an Ace Attorney game, The Great Ace Attorney Chronicles certainly does not disappoint.

Anyone with any sort of familiarity with the franchise will feel right at home here since it’s pretty much the same gameplay seen in older releases, only with very few new features, like the multiple witness focus gimmick. To sum up the Ace Attorney experience, it’s a visual novel with an investigative and counter argument system thrown on top, having you pick through statements in order to find logical faults and downright lies at the cost of a handful of “lives” before you get thrown out and lose the case. It’s fun for sure, but only if you are able to accept some of the issues inherent to these games.

For starters, like previous releases, The Great Ace Attorney Chronicles is very deliberate and slow moving. There’s a literal ton of text to sift through, not to mention logical inconsistencies you eventually learn to cope with during your entire criminal trial adventure. Cases have a certain cadence to them that doesn’t allow you to skip any of its layers of thought before striking upon some truly obvious developments in witness arguments, so in order to truly enjoy The Great Ace Attorney Chronicles — or any other Ace Attorney game, really — you have to be patient, otherwise you’ll just end up frustrated with the overall pacing presented in it.

As trials go on, new pieces of evidence pop up, and upon examination, you use them as pressing arguments against the statements being delivered by witnesses. In case you’re new to the whole thing, The Great Ace Attorney Chronicles does a very good job easing you in during the first tutorial case, but for established fans it might be a chore to sit through the entire thing. Skipping it is entirely possible, but if you do so you’ll end up missing some key story beats, which is a bit of a bummer that might push more impatient types away from the game due to its moroseness during the initial phase of The Great Ace Attorney Chronicles.

Then again, it’s really worth it to sit through and absorb all the madness that goes on in The Great Ace Attorney Chronicles despite these quirks since it’s all written so well and with so much humor. It also helps that the bumped up sprite work for character animations is still as top notch as always, playing off the dialogue brilliantly. Naruhodo especially is incredibly animated, and shows his character development from an insecure student timidly making a stand in court into the great attorney he’s destined to be. Secondary characters are also full of the usual flair and eccentricities and are a blast to see, even more so when they’re the truly guilty parties and very slowly start to break apart when you start picking their statements.

Outside of the still exclusive to Japan Ace Attorney Investigations: Miles Edgeworth 2, I’ve probably played through the entirety of the series, and I can state for a fact that for as close to the franchise formula as it sticks to, The Great Ace Attorney Chronicles is as brilliant of a game as the rest. I’m beyond happy to see more of this series making its way to a broader audience, and I truly hope that it does well enough to warrant Capcom to port other games or even develop brand new Ace Attorney entries in the future.

There’s enough juicy meat on the bone here for you to enjoy for quite a while, even though in terms of replayability there’s little to come back to once you get through all the cases. The Great Ace Attorney Chronicles shows off the amazing talent and creativity of a series that’s in a genre of its own among visual novel games, really. Inherent faults and all, Ace Attorney is absolutely the type of game you’d want to have on whatever system you decide to pick it up for.