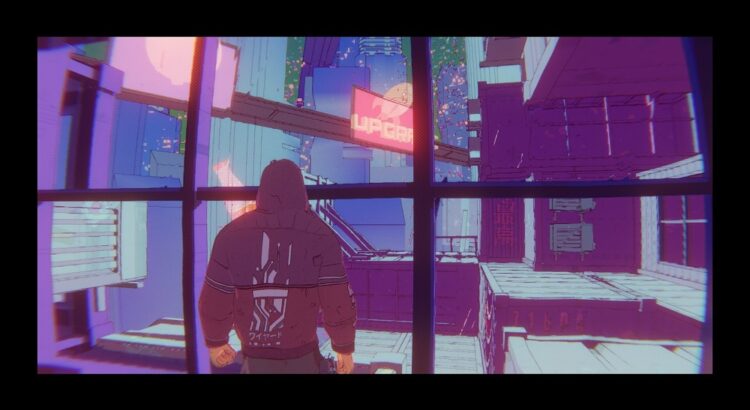 Cyberpunk and videogames have a lot in common. They both have a prehistory in the 1970s and retain a number of tropes that date from the 1980s, the period in which they came of age. Today, cyberpunk is as prominent as ever in videogames, most obviously in the recent mega-budget fiasco of Cyberpunk 2077. For its part, Foreclosed is at the other end of the spectrum. Developed by the small Italian studio Antab Studio, it is a modestly-scaled indie project, one which aims not to create a whole cyberpunk world, but rather to tell a contained, linear story in the same style.

Foreclosed is best described as a third-person action adventure. The player takes the role of Evan Kapnos, a low-level employee of a company named SecurTech in a fairly standard cyberpunk future – think corporate control, cybernetic implants, pervasive mass surveillance, and pink and purple neon being mandatory on all buildings. The developers and their publishers Merge Games have made much of the game’s narrative, but it’s wise not to go in expecting too much. The opening narration is so obviously indebted to Max Payne that it’s actually quite quaint, the plot is functional but nothing special, and some of the dialogue is lost in translation. A thorough pass by a native English speaker would have been a worthwhile investment. Leaving narrative to one side, it quickly becomes clear that aesthetics and gameplay are more fertile ground for Foreclosed.

The aesthetics and art style are where the game is definitely at its best – Foreclosed is not a graphically sophisticated game, which explains its very small download footprint, but its art style is a minor triumph. The game is a novel and very successful fusion of two familiar elements. On the one hand, Antab Studio replicate the standard cyberpunk look: hard lines, lots of neon, deep shadow, and an abundance of circuitry. On the other, Foreclosed is a kind of playable comic book which is strongly influenced by games like XIII. There is extensive use of split-screen, on-screen sound effects, speech bubbles, and cel-shaded characters and objects.

This combination is one which the developers have pulled off in some style. At some points, the player will move Kapnos through a series of split-screen “panels”, some of which are footage from nearby surveillance cameras. This approach gives the impression not only of the prevalence of constant surveillance, but also implies a larger and more complete world than Antab can depict directly. The levels may be small and linear, but Foreclosed is full of beautiful scenes of urban glamour and desolation – these will have many players reaching frequently for their screenshot key.

The gameplay is less consistent, both in terms of style and quality. Kapnos is moved around from an over-the-shoulder perspective, and progresses through the game using a mixture of combat, stealth, light puzzles, and simple dialogue trees. Of these, combat is the dominant mode which is unfortunate because fighting enemies quickly becomes monotonous. Enemy types have little variety and surprisingly, the player only ever obtains one gun – a customisable but underpowered pistol. As you might expect, Kapnos has access to a growing set of special abilities provided by his “not exactly compliant” cybernetic implants. When the game begins these are weak, but by the end it is possible to obtain an upgrade which can kill most enemies instantly, with a relatively short cooldown. Combined with the weakness of the pistol, this strongly encourages a tiresome peek-a-boo strategy; pop out of cover, blast an enemy, retreat to cover to recharge, repeat. The AI is very simplistic, to the extent that foes rarely make any effort to flank, which makes this strategy boring but very reliable. Antab might have been better advised to focus more on stealth, as this seems to better fit the game’s theme of being a man on the run.

Foreclosed is the work of a very small team, and it shows. This is an indie game which in a number of ways, certainly can’t compete with comparable games with vastly larger budgets. This goes a long way towards explaining the lacklustre combat and the game’s short length, which means it can be completed in under five hours. With that said, Foreclosed has an excellent aesthetic and a number of genuinely intriguing scenes. For fans of cyberpunk, or of third-person adventures generally, this is a trip into the future that is worth taking.