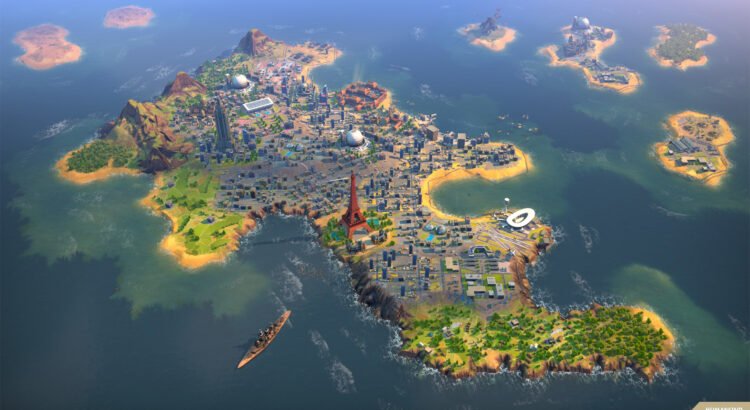 Back in 1991, Sid Meier unknowingly influenced the strategy game genre for decades to come with the release of Civilization. Thirty years later, strategy games are still finding ways to refine and improve on the basic mechanics of exploration, city building, and military conquest first seen in the legendary world spanning strategy game. Humankind isn’t perfect, but it adds a lot of interesting ideas and showcases what a culturally based strategy game might look like.

Upon booting the game up, you’re treated to an accessibility menu, which unfortunately is limited to adding subtitles to cutscenes. From there, you’re tasked with creating your avatar/AI persona. You can choose from a variety of customization options for facial and hair styles, or use one of the many preset options. You can also select your empire’s symbol, and color and interestingly, add a number of traits, strengths and biases to your ruler that embody your faction and add minor bonuses.

From here, you are treated to a twenty second history lesson, from the time amino acids form in a pool of primordial goo, to our ancestors crawling on land, walking upright, discovering fire, using tools and suddenly we’re in the Neolithic Age, woolly mammoths and all. Your small hunting party might be a little intimidated by these huge beasts, but you can still hunt them for gold if you like. The ultimate goal in this era (and any subsequent era) is to earn Era Stars. In this age, you accomplish this by building influence, which involves exploring the map and collecting “curiosities”. Enough of these will propel you into the next era, while also boosting your influence level.

Each culture features an Emblematic Unit, which is a unit unique to that culture. Cultures also feature an Emblematic District, which is a culture specific district that can be built in cities. Each culture also comes with a Legacy Trait, which bestows exclusive effects and bonuses to that culture. Your culture’s Legacy Trait bonuses will stay even if you end up adopting a new culture. Every Legacy Trait of past cultures will stack across different eras, creating a variety of bonus combinations.

Winning the game involves acquiring the most Fame. The key source of Fame are Era Stars, which are earned by completing specific objectives for your culture and have seven categories that correspond to the seven cultural affinities. For example, Agrarian societies earn stars and fame through increased population growth and Militarist societies earn stars and fame through conquest and expansion. These cultures can also earn other stars and fame as well, such as Scientist stars for increased research potential or Aesthete stars for increasing influence but completing cultural objectives that correspond to your culture awards you bonus fame as well.

Your empire will advance through the different eras, from Neolithic to Ancient to Classical-Medieval-Early Modern-Industrial, and finally, Contemporary. Upon finishing an objective, the Empire will be awarded with an Era Star and Fame. These objectives are specific to each Empire – if an Empire achieves one, it will not impact the objectives of other Empires. In order to advance to a new Era, an Empire requires at least seven Era Stars. If the player wishes to do so, they may remain in the Era for longer to gain additional Fame from the Era’s objectives, although they will not benefit from more Era Stars.

Advancing through the different eras can be a bit of a culture shock for your empire. For instance, in one game in one of the early eras, we had an Agrarian society that was focused on population growth and the production of food to feed everyone, and in a later era, we opted for a more militaristic culture. This no doubt came as quite a shock to the populace, as conscripting the population to serve as members of the military seemed to go against the very ideals and values of our original Agrarian society.

Throwing down outposts to claim territory marks borders and allows you to expand your empire. These outposts can evolve into cities using influence, and cities can provide training of units, a center for districts and a vital opportunity to set up infrastructure for your empire, such as horse ranches for mounted cavalry, or harbors for fishing and naval units. At the outset, you’re limited to two cities, but subsequent eras raise this cap, as well as certain civics, which provide permanent bonuses as well.

Battles can be played out through instant resolution, which judges the relative strength of your units versus your opponent. For a more nuanced battle, you can deploy your units, taking into account formation, land elevation, etc.

Researching more advanced technologies opens up a variety of new options, both for your cities and for your armies. These technology evolutions are familiar and seem like natural progressions, such as Astrology leading to Mysticism and Holy Rites or Irrigation leading to Aqueducts.

Humankind isn’t without its flaws, however. Cities seem to lose population randomly, apparently due to “low food growth,” even if you have nothing but farms supporting your cities. The game also gets finicky about transferring armies to and from ships, particularly when trying to land on continents fully controlled by enemy cities. Trying to enter their sphere of influence results in a “no set path” error message when trying to disembark units.

When it’s at its best, Humankind represents a fascinating look at the strategy genre through the historical lens of tribal society through the space age. Amplitude’s focus on cultures and cultural affinity sets Humankind apart from games like Civilization and commitment to supporting the game with early and numerous patches and bug fixes mean that your empires will be racing towards the stars for a long time to come.