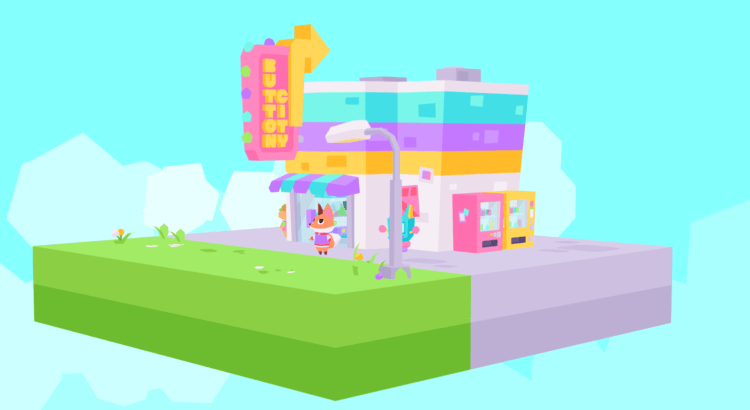 With the sudden rise of “wholesome games” as a brand (over the past year especially), it’s easier than ever to find lightweight, comforting works to check out, so much so that your options are surprisingly vast. Of them, Button City has been among those in the spotlight for a while and it’s easy to see why: it’s cute and hits all the major points you usually expect out of games that brand themselves as wholesome and executes them well.

Button City follows Fennel, a young fox who’s just moved to a new city and hasn’t quite settled in, spending most of his days cooped up in his room playing games. One day while out running errands, he hears talk of an arcade and decides to check it out, only to get pulled into a local competition involving a popular team-based game called Gobabots. Turns out Fennel’s a natural and is properly recruited onto the team known as the “Fluff Squad.” Not long after, the crew learns the arcade is set to be sold to some exec who wants to turn the place into a generic big-box supermarket as part of some big project to rebuild the city, prompting them to hatch increasingly absurd plans to try and save the arcade, such as: opening a lemonade stand to raise money or disguising themselves as the arcade’s owner to try and sabotage the deal.

It’s a pretty standard story of friendship, community, and growing up, unfolding mostly how you’d expect a plot like this to play out given how much it plays in the usual trappings of “kids unite to save town/community fixture from the clutches of capital.” It’s cute and an all-around good time, the characters and the writing being consistently fun throughout. It is, in some ways, a perfect example of what the idea of “wholesome games” conjures: cute, lighthearted works that are often more about delivering chill vibes and good times above all else, which, in this case, sums up Button City‘s entire tone flawlessly. It’s not without conflict or drama, but it handles everything the way you’d expect a family-friendly, “feel good” sort of work like this to do so.

The game largely sees you running around town, occasionally helping people with whatever problems they have and even challenging them in a game should you choose. Such problems usually involve finding certain items or playing a game. They’re very straightforward, the draw being the small stories that accompany them — or the gags, in some cases. For example, one side-quests sees you facilitating a conversation between someone and their downstairs neighbor by… running letters between them, each letter asking small “this or that” questions to learn a bit about one another. It’s cute and kinda silly (would be easier if they just talked to each other directly, but then… who doesn’t know the deep anxiety of meeting new people?) and serves as a good example of the stories that exist on the side. In another, you end up teaching another team of Gobabot players how to improve by playing them using specific team compositions. And in another still, you also can help a local conspiracy theorist expose the world is, in fact, a simulation, which takes quite a turn.

If you choose to play some games instead, which one you play depends on the person. Gobabots is a four-on-four versus game where two teams compete to collect the most fruit. Revolution Racer is a racing game that sees you vying for the fastest time while also trying to beat your opponent. And Prism Beats is a DDR-style rhythm game. Each of the games is simple and easy to pick up — everything’s so straightforward that only Gobabots specifically provides a tutorial — but still have a decent amount of depth to keep them interesting past the first couple of times you play them.

Modifiers and entirely new modes change just enough about each game to add some variety. In Revolution Racer, for example, you can change it so the track is slick with rain, making it harder to take turns easily. Likewise, you can change note behavior in Prisma Beats to make them vanish as they approach the respective inputs or zig and zag about the screen, making an already difficult game even harder. (I don’t know what it is, but something about Prisma Beats makes it too difficult for me to last very long in it. I’m no stranger to rhythm games, but even without any sort of modifiers, I’m lucky if I can survive longer than 30 seconds. Maybe I’m just not used to managing four separate inputs? I don’t know.)

The deeper elements in each game only come into play when you engage with them on your own time. Any time you’re required to play one as part of the main story or a side-quest, you’re working within set parameters. Gobabots will always see you playing the same team whenever the plot calls for you to play, for instance, whereas challenging people lets you customize your team as you see fit, wherein you’re sometimes required to alter your team to counter that of your opponent.

There’s no real stakes while playing these games purely for fun. If you win, you get some cash and prize tickets, both of which are used to buy temporary buffs in games, new modes, or just cosmetics. It’s all very chill. You can’t challenge literally everyone you come across, of course, but you can challenge a surprising number of townsfolk. The number is such that it feels like the arcade is an actual pillar of the community since everyone’s pretty much willing to play whatever whenever. First time encountered the option, I figured it had to be connected to something bigger or would be a one-time thing (as long as you beat them, anyway) because that’s usually how most games would approach this: just more content to clear, perhaps with some reward attached if you won against everyone.

It’s emblematic of Button City‘s aims. This is a game that pitches itself as a “wholesome adventure,” after all, so of course the entire experience is going to be very light and silly and easygoing. And what it does it does well, providing an enjoyable little jaunt through its colorful low-poly world. If you find yourself in the mood for a lighter, stress-free sort of game, can’t go wrong with Button City.