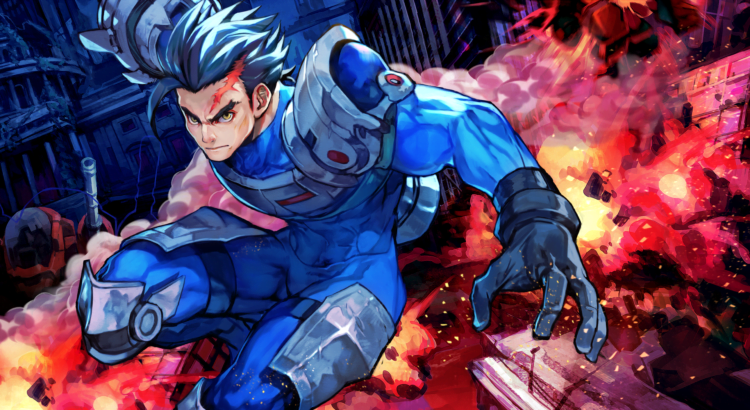 Tribute Games have been on a roll with their own internally developed games like Wizorb, Mercenary Kings, Flinthook and last year’s excellent Panzer Paladin. Every one of their titles brings about a new twist to some very retro-inspired adventures. Their very first outside developed published game, Zenovia Interactive‘s Steel Assault keeps that trend going, with solid gameplay and teeth-clenching level of challenge.

Steel Assault is an action platformer that takes cues from a number of 8 and 16-bit era games, like Gunstar Heroes, the many Castlevanias, Ninja Gaiden and Bionic Commando, injecting its own unique take on destroying endless numbers of enemies that stand in your way to saving the world from evil. This time, you play the role of Taro Takahashi, a cyber ninja type hero armed with an electric whip weapon and a, uhm, hook thing that he uses to get around.

There are two modes of play, arcade being a straight up old school console game with no checkpoints that you have to beat level by level in one run, while the main campaign has a much friendlier but still very challenging journey through a series of war-torn environments with sub and big bosses thrown in to keep things interesting. These fights come about after relatively short multi-screen stages and are tough, but ultimately fair, and even once you figure out their attack pattern, can still be somewhat difficult to take down.

Luckily, Taro can use his hook tool to latch onto walls and obstacles in order to get around and even find temporary safe spots especially in those encounters. The latter can prove to be a little harder than it should be because you can’t stick to every surface, which brings about some trial and error that can be a tad annoying. That issue is exacerbated by the Steel Assault‘s graphical presentation — while it’s certainly beautifully done in an extremely detailed and colorful 16-bit style, it sometimes obscures the action and is inconsistent when it comes to indicating where you can latch to.

Another quirk that might irk you is the way checkpoints are treated when playing through the campaign. They’re very well placed for sure, even popping up right before boss fights, but they don’t do away with intros, so if you happen to get stuck in a particularly tough encounter, you’re going to have to watch the same animation and VS screen every single time. It’s not that bad of an issue, granted, and thanks to the very generous checkpointing, with some patience, it’s quite possible to get through the game.

I’m a huge fan of games like this, that are respectable to what came before them and don’t try to merely ape them, but add something tasty to the formula. While Steel Assault stumbles somewhat along the way in its delivery, it’s still very playable and is a pleasurable challenging romp that is very much possible to succeed at if you stick with it.