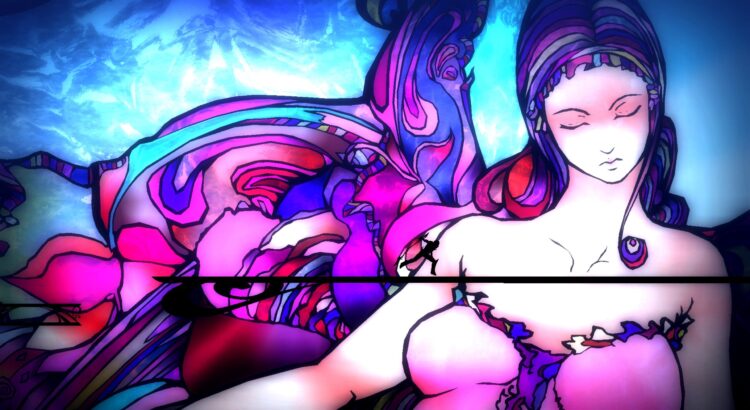 El Shaddai: Ascension of the Metatron is a truly unique game. It’s not a game which ever attracted mass-market appeal and probably never will, but for a certain niche of people, it’s an interesting anomaly. Originally released in 2011 for PS3 and Xbox 360, El Shaddai is an action game from Japanese-Indian developers UTV Ignition Games (a subsidiary of the Walt Disney Company for India), which closed down the year after the games’ release. Languishing in obscurity for almost a decade, a PC version has finally emerged from Crim, a company setup by Takeyasu Sawaki, the game’s former director. El Shaddai has a selection of gorgeous visuals and contrasting art styles, but is let down by its repetitive gameplay.

El Shaddai’s story is based upon the apocryphal Book of Enoch, an ancient Hebrew text supposedly written by Enoch, the great-grandfather of Noah (of the Flood fame). You play as Enoch (dressed very stylishly in flared blue and white jeans) as he attempts to find seven fallen angels (the Girgori) in an attempt to enact God’s plan for the aforementioned flood, helped along the way by guardian angel Lucifel. Likewise there are four archangels which also work with Enoch; Raphael, Uriel, Gabriel and… Michael. The story isn’t really what you’re playing the game for and is mainly delivered in a covert fashion, with little tidbits thrown in here and there. It doesn’t help that the voice acting is rather stilted, as remains common for many Japanese game ports.

El Shaddai is predominantly an action game, most strongly reminiscent of Devil May Cry. The combat is very simple and straightforward, with three main weapons you can use; the Arch, a holy blade, the Gale, a kind of wind-personified weapon, and the Veil, which can be used both for defence and offence. Each of these three weapons can be used against enemies in different ways, and as you can’t equip all of them simultaneously, you’ll need to swap between them by looting them from enemies you’ve defeated. You can block and counter enemies as well as perform power-moves from time to time. On the default difficulty fighting is proficient but very one-note, as the enemy design never really changes through the entirety of the game, with Enoch facing a variety of dark shapeshifters who all fight identically. Therefore, I mainly focussed on enjoying the game’s singular visual style.

The design and aesthetic of El Shaddai is what you really should play the game to witness. From start to finish, this is a staggeringly pretty game, the visuals aging with remarkable timelessness given the age of the engine the game is running on. Different zones in the game have radically different styles, from a futuristic cyberpunk city to ethereal cloud shapes to cathedrals of light. The game also morphs between several different camera styles, from a fixed 2D camera to a free 3D camera, allowing the designers to draw attention to the visuals in really interesting ways while introducing occasional platforming. The range is truly astonishing and I was continuously surprised at how the game could invent new and bold locations to visit in each chapter.

What’s really interesting about El Shaddai is that it doesn’t shy away from sexualizing the male body whatsoever. In most games and film media, women have almost always been sexualized over men, with the “male gaze” a long-established trope. In El Shaddai, this trope is inverted. If Enoch gets damaged, he gradually loses his white armour until he’s left completely shirtless, exposing his muscular body. All of the characters are a selection of beautiful males (with most of them being either angels or fallen angels), with Lucifel for example dressed in smart black jeans and a tight black shirt. It’s not overtly referenced or mentioned in any way by the story, but I found this decision genuinely fascinating.

El Shaddai is an extremely bare-bones PC port. There are no mouse controls at all; the game won’t function without a controller. Likewise, the game has no graphics settings, so tweaking the look of the game is out. There are also some minor performance and screen tearing issues, which given the game’s age is unacceptable. It is functional and certainly better than the completely broken PC ports such as Deadly Premonition, but it’s clear that not much love and attention has gone into making the game run on PC.

El Shaddai: Ascension of the Metatron is truly a unique game, and despite its bland gameplay, feels like a genuine cult classic. The combination of incredibly imaginative visuals and great music manage to hold your attention, even as you mindlessly fight through the same enemies over and over. It’s disappointing the PC version is lacking in customisation, but nonetheless it’s nice that there is now a better way to play El Shaddai instead of digging out your PS3 or Xbox 360.