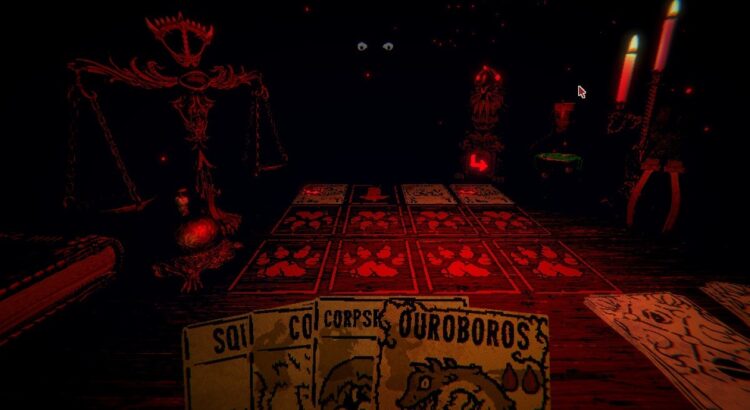 The cards on the table, the scales that keep the score, and your mysterious captor’s eyes lurking in the thick darkness all tell the same story. You are doomed on the next turn, unless something is added to the other side of the scales. Sometimes sacrifices must be made, and now only one option remains. In desperation, you reach for the pliers. Your vision turns blood-red as you rip out one of your own teeth…

Inscryption is the third major game by Canada-based Daniel Mullins, who first came to prominence with his metafictional horror oddity Pony Island back in 2016. At its core, this is a deck-building card game with a roguelike structure, which invites comparison with sleeper hit Slay the Spire. However, Mullins’ design also includes an intriguing escape room puzzle element, and an unnerving horror backdrop with a generous helping of blood, bones, and fourth wall-breaking weirdness. It is an inspired combination executed brilliantly, and in a word, Inscryption is wonderful.

The game is played from a first-person perspective, and takes place within a dark, ominous cabin. The player has seemingly been taken captive by an enigmatic and apparently unhinged figure, who is visible only when their eyes or grasping hands pierce the cabin’s pervasive gloom. For much of the time, the player is sat at a table and made to play a game comprising various card-driven encounters, each of which is represented by an icon on a series of overworld maps. Along the way, players build a deck of cards featuring an array of creatures, from basic bullfrogs and wolves to more exotic fare like amoeba and larvae with secret abilities.

The player’s journey provides choices of locations to visit, and the various encounter types offer chances to gain cards, replenish powerful single-use items, and even upgrade or combine creatures into new hybrids. The most common encounters are battles, in which the gradually improving creature deck must be carefully deployed to defeat the “host”. True to the game’s spooky atmosphere, deploying a card usually costs either blood (obtained by sacrificing existing cards, like expendable squirrels) or bones (earned when a creature is killed in combat). While these fights can seem simple at first, they gradually take on a terrific tactical complexity as more cards, abilities, items, modifiers, and bosses are brought – literally and figuratively – to the table. All this is even without taking into account the wider, ongoing metagame.

At frequent intervals, the player can also step away from the table and explore the cabin and its curiosities, which include shelves of odd items, a locked safe, and cabinets protected by puzzles. Upon returning to the game, the player will then continue their journey in pursuit of victory and, perhaps, a means of escape. One of the brilliant aspects of Inscryption is its interplay between what happens on the table, and what can be discovered in the rest of the cabin. Early on, for example, the player’s stoat card – which naturally, can speak – says that a code to the safe was scrawled by a previous victim inside the in-game rulebook. Later, a particularly gruesome item earned at the table provides clues to a puzzle elsewhere, which when solved provides further, game-changing cards.

The game’s atmospheric presentation is another of its charms. Spending hours looking at objects on a table is not normally captivating, but Inscryption works dark wonders in this area. The game has no traditional user interface, so key information is conveyed by the items in front of the player. On their left is their stack of bone tokens, the rulebook, and the scales. On their right is the deck, any buff-providing totem the player may possess, and their supply of items like pliers, or a fan which allows their cards to strike over the enemy’s creatures and directly at their master. Take too long to make a decision and the hidden captor’s decayed fingers will drum on the table impatiently, and very occasionally a big, black spider will scuttle across the cards. In short, Mullins and his co-conspirators display a mastery of atmosphere in Inscryption and it is a major factor which will keep players coming back.

Players will keep coming back, in more ways than one. Inscryption is a roguelike, and that means that many runs will end in failure, but the game has clever ways to make defeats meaningful. Brilliantly, at the end of an unsuccessful run the captor will facilitate the creation of a unique player-made card. Choosing the cost, attack strength, and special ability from each of three cards used in the failed run, the player can make something completely new and potentially very powerful indeed. While rare, these “death cards” will show up in subsequent runs and can turn the tide of some of the toughest battles. Another thrilling way to modify cards is by visiting “the mycologists”, one of the various guises the captor adopts using wooden masks. They will fuse pairs of identical cards into a single entity with twice the strength and resilience. Inscryption richly rewards those who push and exploit its systems, in ways so surprising and charming that it frequently raises a smile. In the case of the mycologists, cards that have been experimented upon can be meddled with again if another duplicate is found, with even more formidable results.

A product of a talented developer hitting their stride, Inscryption is a fantastic game which fuses card play, puzzles, roguelike mechanics and a foreboding atmosphere into a unique and enthralling package. The game is bursting with secrets, mysteries, and unique strategies that are too surprising and special to spoil. It evolves and grows over time in a wonderfully engaging way and yet never loses its strangeness and quiet menace. Get in at the ground floor while teeth and sanity remain – Inscryption could just be the next big thing.