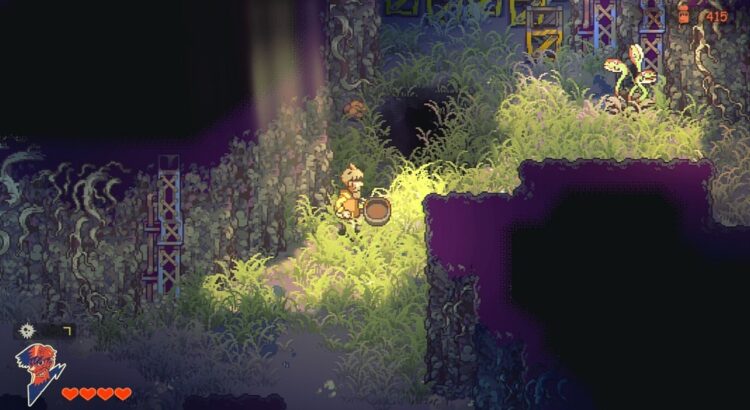 To collect influences from a number of older sources, and to successfully combine them into something which still feels fresh, is an intimidating challenge. With Eastward, Shanghai-based indie developer Pixpil have been able to do just that. This top-down, pixel art adventure lifts much of its style and gameplay from precursors as varied as early Zelda games, ‘90s JRPGs, and the films of Studio Ghibli but makes from them something uniquely charming. Eastward is a sprawling journey which plays smoothly and takes place in an imaginative world that frequently looks and sounds stunning. Potential players should be cautioned, however, with respect to the game’s excessively talky script and languid progression.

Eastward makes a striking first impression with its wordless animated intro, which is rich with glimpses of the characters, locations and plot points which are to follow. The game, which is Pixpil’s first, is set in a world somewhat like our own which has been afflicted by an initially unidentified disaster. In the small underground town of Potcrock Isle, players meet John and Sam, the game’s immensely likeable duo of protagonists. John is a “digger”, or miner, who makes a living searching beneath the town for relics of the past. On a previous expedition he discovered Sam, a mysterious and exuberant white-haired young girl who soon proves to have prodigious psychic powers.

While John and Sam begin the game enjoying a relatively carefree life in Potcrock Isle, events conspire to have the adoptive father-daughter pair adventuring first underground, and later on the surface. For its first few hours, Eastward adopts a leisurely pace as it introduces players to its core gameplay mechanics. Typically, both John and Sam are controlled simultaneously as they explore the world. The game is broadly divided into two alternating phases: a dialogue-driven phase, in which the pair can only move around and speak with townspeople and other NPCs, and a more active phase.

It is only in this active phase that most of Eastward’s real mechanics come into play. This mode begins wherever John and Sam enter a dungeon or other potentially dangerous zone. The two characters can be tagged in and out as the primary hero, and each have their own abilities and specialisms. Broadly speaking, John is more combat-oriented. He starts out with a humble frying pan as his primary damage-dealer, but gradually acquires other weapons including a shotgun and a flamethrower. He can also drop bombs, which are useful not only for defeating enemies, but also for clearing certain obstacles.

For her part, Sam is a slightly more passive character but her psychic abilities can be used to stun enemies, temporarily remove certain plants blocking progression, and to illuminate specific darker areas. She also thoroughly dominates the exploration and dialogue part of the game, for the simple reason that she is vocal, friendly and outgoing almost to a fault and John is seemingly unable to speak.

The gameplay in the combat and puzzle portions of Eastward are more sturdy than they are groundbreaking but they are consistently entertaining. The enemy variety is quite large, the puzzles are never overcomplicated, and the bosses are of that rarest type – they are actually fun to fight. The various abilities and items are satisfying to use and often have multiple purposes. For fans of classic JRPGs, there is even an extensive game-within-a-game called Earth Born of which Sam is an avid fan. Playable on games machines located in a number of locations in the world, this is a clear reference to Earthbound, one of the principal influences on Eastward – particularly in its irreverent, offbeat tone. The rest of the game is certainly not an RPG, but much more similar to the Zelda series and its early derivatives like Beyond Oasis.

With all this being said, gameplay is unlikely to be the main draw here; everything Eastward does has been done better elsewhere. Where the game truly excels is in its aesthetics. Put simply, the game is a masterclass in pixel art. The game’s environments in particular are bursting with rich detail, and the amount of time that must have been invested in them is incalculable. Crucially, this retro world feels alive. Strange creatures move in the trees, grass sways as John and Sam pass by, and even minor characters have animations and gestures that are unique to them and which fit their personality. Pixel art is so widely used today that many bemoan its prevalence – but even the most jaded players will be hard-pressed to find fault here. The sheer beauty of the game’s visuals is matched only by its superb and memorable music by Joel Corelitz, whose work will next be heard in Halo Infinite.

This leads to the most potentially divisive aspect of Eastward, which is the relative weighting of those dialogue- and action-driven phases. There is no getting around the fact that Pixpil’s game is extremely talky, to the extent that tapping through dialogue will take up something like 60% of time spent with the game. The game is full of interesting characters and an intriguing if overly languid story but the sheer weight of dialogue is difficult to justify. At times, players will sit through 15 or 20 minutes or almost solid dialogue; only those who are most deeply engaged with the story and characters will not sometimes cry out to be given more control, to be allowed to explore another beautifully designed dungeon. What makes this harder to take is that players are entirely passive in these sections; there are no dialogue options at all and the reams of chatter can’t be efficiently skipped.

Eastward is a remarkable achievement in a number of ways. Those for whom the world, story and characters really click will likely regard it as a minor masterpiece. A more general audience can revel in the visuals and music, and also get a lot out of the combat, exploration and puzzles, but may find the game frustratingly talky and slow-moving. Ultimately, it is the prospect of the game’s script that will help players determine if a trip Eastward is one worth taking.