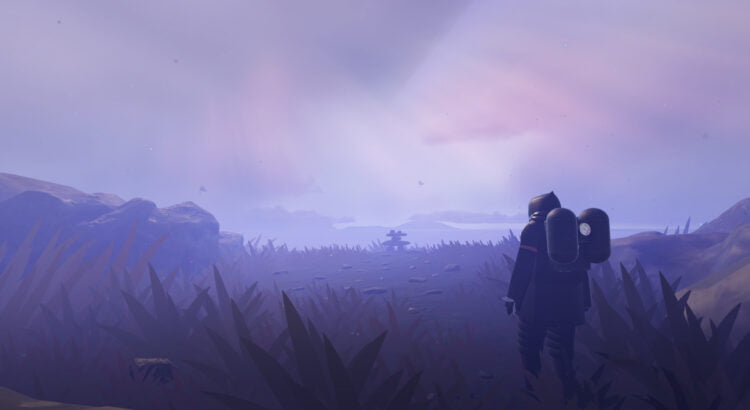 This last week I watched the new Denis Villineuve directed adaptation of Frank Herbert’s novel, Dune. I enjoyed it, although it’s interesting that it’s extremely challenging to transfer such a densely plotted novel to the big screen (as David Lynch discovered for his 1984 version). The film is paced very slowly, and this is a fault which seems to be afflicting a lot of media at the moment. Jett: The Far Shore is the second game from Superbrothers, best known for their 2011 debut classic Sword & Sworcery EP. Jett is certainly a beautiful game filled with some interesting ideas, but the actual “game” elements feel frustratingly lacking. Combined with some atrocious performance problems, Jett predominantly left me feeling frustrated rather than awed.

Jett is an semi-open world exploration game following a group of alien explorers, originally from a planet where seemingly life is dying. The atmosphere is choked and polluted, strewn with massive hulks of cargo ships and chimneys of industry. You play as Mei, an astronaut chosen to represent her people on a millennium long voyage across space to discover the source of the mysterious Hymnwave signal. You’re usually accompanied by Isao, a talkative fellow explorer, alongside a group of senior astronauts whom I referred to as the Admiralty Board. After an introductory sequence where you ascend into space, the game jumps forward by 1,000 years to the spaceship arriving at the titular planet Far Shore, the supposed source of the Hymnwave. You are then tasked with piloting a “jett”, or a small scout spacecraft, to explore the new world to uncover the indigenous wildlife and see if the planet is viable for colonization.

The game’s world and story are fascinating, but presented in a quite long-winded and piecemeal fashion. The entire plot is delivered through voice acting in the game’s invented alien language; a kind of merger of European and South American dialects. This is fascinating and amazing, that the game not only developed its own language but then was able to hire voice actors to deliver all the dialogue in that language. The nature and landscapes of the alien planet are wonderfully otherworldly and everything is given quite inventive and floral names, such as the “Hoppas” which literally hop around the landscape. The main plot is also quite interesting, and the characters are generally likeable (although Isao has a very annoying habit of continually telling you to do things you’re already doing). Thematically the game examines the disconnect between science and religion, as Mei is from an ultra-religious planet where all scientific endeavour is done through the lens of religion. The general problem is the very slow and deliberate pace at which the story is doled out, only really properly explaining your mission after you’ve been playing for several hours. It feels like an arthouse film or an Andrei Tarkovsky epic, the game luxuriating in the atmosphere it is creating at the expense of a deftly paced story.

Jett’s critical flaw however is the gameplay. Most of the game is spent navigating across the surface of the planet in your jett, completing various objectives such as scanning lifeforms, evading enemies and navigating the environment. The jett is very squirrelly to handle, moving super fast but difficult to turn when scramjets are enabled, and incredibly slow and cumbersome when scramjets are disabled. I never really felt like I was properly handling the jett, especially when the game makes you try to complete some more complicated tasks such as using the jett’s grabber to move items, or having to stop and hide in shadow when the nearby sun emits dangerous radiation. Despite being set in huge environments the game is resolutely linear, with very little to find off the beaten track, despite the appearance of something similar to No Man’s Sky. The game also loves to deliver a large amount of dialogue to you during gameplay, and since all of this dialogue is in the alien language, it means having to read the subtitles while you’re also trying to complete objectives. On-foot sections are generally handled better as you’re usually just chatting to characters or examining computer terminals, although the speed at which you walk around locations feels quite plodding.

The game has a massive host of performance problems on PS4. On the PS4 Pro, the framerate struggles constantly to maintain any kind of solid 30fps, regularly dipping into the low 20s. Everything feels sluggish and unresponsive because of this, including the ship controls and on-foot sections. The environments are normally massive and certainly visually impressive, with the alien landscape looking suitably dramatic. However, they’re not extremely detailed apart from the swaying grass, hence it is somewhat confusing why the game is struggling so much. Even in small environments while walking around when you’d expect the game to run adequately, it still struggles, never keeping a stable framerate for more than a few seconds, the camera panning around with a slow and juddering movement. Likewise all of the ship-based controls feel similarly frustrating. The game is pretty, but nowhere near as pretty as you’d expect with performance like this. If it’s this bad on the Pro, and apparently still not great on the PS5, I shudder to think what the base PS4 must be like. As of yet, a patch is yet to rectify any of these issues.

Jett: The Far Shore has an interesting and deep world, but it takes far too long to actually get around to telling you about it. It’s also sadly just boring to play thanks to the glacial pacing, which leaves your enjoyment purely hinging on your engagement with the characters and story. If you’ve got the patience to enjoy Jett’s deliberately slow approach, you’ll certainly find an interesting world to learn about and explore, filled with unique alien lifeforms. For most people however, the lacklustre gameplay combined with poor controls and performance issues will likely lead to frustration long before the story reaches anything meaningful. Jett: The Far Shore is a disappointment when compared to Sword & Sworcery EP, and I sincerely wish it were just more enjoyable to play.