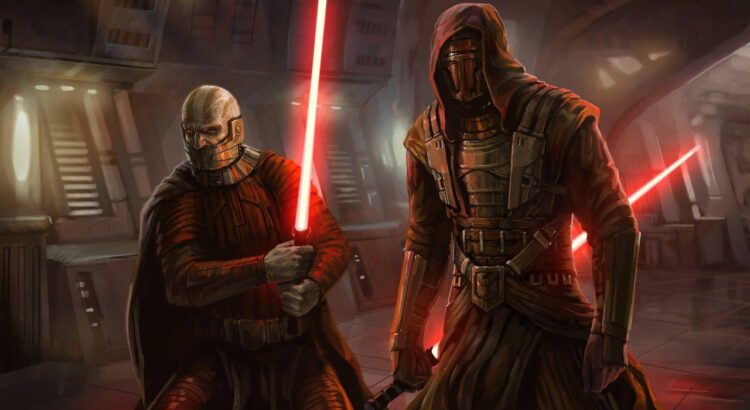 Like Jedi Outcast, Star Wars: Knights of the Old Republic is one of my formative games. It also happens to be a Star Wars product, which is no coincidence given that at the time, I was at my peak Star Wars fandom, thanks to the then new movies and of course, the games themselves.

Knights of the Old Republic also marks the height in both Bioware‘s popularity and genius at play. It’s an oldie by today’s standards, sure, but it brought in so much of their talent and brilliance that it far surpassed another one of my favorites which happens to be the title that came before it in their catalog, the first Neverwinter Nights.

It’s absolutely no wonder that KOTOR did so well. We’re talking about a game that took one of the world’s most valuable and popular franchises and threw it into a D&D-ish guided gameplay system. It also set things up eons before the events of the movies, so it had space to grow its own lore and cast without worries of stepping onto any fanboy’s toes.

Bioware hit it out of the park in all regards, really. It’s no exaggeration that Knights of the Old Republic is that company’s star creation, even surpassing what would eventually be the start of their downfall with the Mass Effect quadrology.

KOTOR came out at the perfect time too since the Xbox was in dire need of an exclusive in order to put it ahead of the much better selling PlayStation 2, and in that regard it was one hell of a system seller. It made me want to get Microsoft’s black box and I was glad to do it. I ended up putting hours and hours into the game, doing both of its dark and light paths multiple times.

And in time, I would continue to be deep into its lore with the continuing adventures of its sequel, Obsidian’s flawed but ultimately competent Knights of the Old Republic II: The Sith Lords, and in the still running and criminally overlooked MMO, The Old Republic. KOTOR overall was so successful that up until Lucas’ acquisition by Disney, the events set by the games were considered canon, and even after the buyout, some events and characters are on and off referenced in the shows that followed, like The Mandalorian.

This brings us to Aspyr and their numerous ports of old Star Wars games. It was announced a few months ago during E3 that the much rumored remake of Knights of the Old Republic would be indeed coming out in a few years, but not before a re-release of the original version on Nintendo Switch.

Given that company’s trek record with these remasters, one would think KOTOR would do similarly okay. It ran fine back on the original Xbox, although the best version ended up being the PC port that came out a little while after. Since 2003, technology has obviously evolved, but that doesn’t necessarily mean that games from that era run any better these days.

Thankfully, that’s not the case here. Knights of the Old Republic is a brilliant port and it’s very much worth it on the Switch. The performance in both docked and portable modes is silky smooth and the visuals are as sharp as they can be for what’s an almost 20 year-old game. In terms of gameplay and systems, KOTOR still holds up although it doesn’t try to hide its age at any point, meaning that if you’re used to modern ease of play features such as auto-attack and well, a decent inventory system, you’re bound to be disappointed by the lack of any such things in this.

Then again, Knights of the Old Republic is a much bigger experience than just its combat or its clunky item organization system. As soon as the iconic Star Wars story scroll and fanfare pop up on screen and start blaring, it delivers a story unlike any other you’re likely to find. If this is your first time playing KOTOR, do your best to avoid looking up anything online and just play it, trust me.

So if you happen to not own Knights of the Old Republic on any other easily reachable systems or are looking to play it portably and comfortably, this Switch port is definitely the way to go. Aspyr has done an admirable job carrying it over and it’s a nice distraction while they hopefully do the original game justice in the upcoming remake. Worst case, we can always dive back into this and relive the glory days of Darth Revan while riding the bus or heck, on the can.