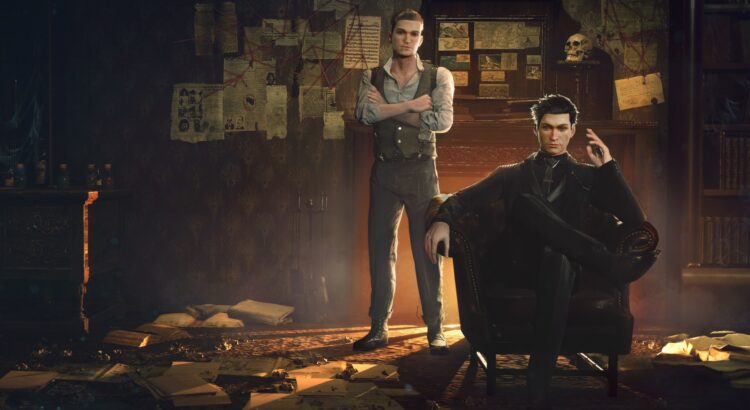 It’s not at all hard to think of a fictional character that managed to leap from whatever medium they happened to be created in and on to actually start to feel real, thanks to the love of their audience. Sherlock Holmes is one such character, a persona that’s so strong and has been around for so long that he’s thought about more as a celebrity than merely a literary figure created by Sir Arthur Conan Doyle more than a century ago.

He’s been portrayed in cartoons, comics, movies, TV shows, and in a number of video games, to various degrees of financial and critical success. If there’s one thing in common with all of these, regardless of how well they’ve done, is that Holmes can take a variety of forms and still be an extremely compelling vessel for whatever story he’s used in.

In Frogware‘s Sherlock Holmes: Chapter One, we get to see a much younger version of the famed detective as he’s fresh from the boat onto Cordona, a Mediterranean island where he supposedly spent his childhood in order to pay respects to his departed mother. There’s a deeper mystery surrounding that death, and it’ll be up to Sherlock (and his imaginary friend Jon  to a degree) to get to the bottom of it.

Yes, you read that right: Sherlock has an imaginary friend in this game. Considering that in the books Holmes only met Watson well into his career as a detective, in the game Jon serves as a similar purpose to the more emotionally driven, war-scarred doctor. Even at the young age he’s portrayed in the game, the world’s most famous and out-of-the-box thinker already sported a bunch of eccentricities, and it falls to Jon to push him to actually engage many of Chapter One‘s cases. The more adventurous side of his mind sprouting up, if you will.

Unfortunately, for as clever as this approach might sound on paper, its execution leaves a lot to be desired, with Jon intruding at every opportunity and leaving notes that do nothing aside from pestering whoever’s playing the game. Well, in that department, there’s way more left hanging when it comes to Sherlock Holmes: Chapter One. Like Frogware’s release from a few years ago, The Sinking City, Chapter One is a game full of systems and ideas that are theoretically good, but end up being terribly implemented.

Like The Sinking City, the new Sherlock Holmes is presented as an open-world investigation game. You’re supposed to use whatever clues you scrounge up and figure out where to go next, sometimes only getting a slight hint of an address that you use to pinpoint the next drab building you’re supposed to explore. The exact same information gathering system that was presented buring Charles Reed’s adventure in Oakmont is used in Sherlock’s own while exploring Cordona. So if you played The Sinking City, you’ll have an all too similar experience with Sherlock Holmes: Chapter One.

Bits of information you happen to stumble upon can be combined using what in this game is called the Mind Palace, where you deduct and put together affirmations in regards to whatever case you’re currently snooping around for. You can also pin clues and use them as a theme to inquire people as you search for more, which ends up feeling really random and not logical, especially if you take into account that you’re supposed to be coming to your conclusions based on fact and not pure hearsay. The game’s even confusing when it comes to that aspect of “solving” a case. By haphazardly putting together a string of random occurrences you eventually end up stumbling upon an answer that rarely makes sense, leaving a lot of questions unanswered.

And even when you’re actively investigating and trying to gather information by visiting the various archives around the island, you have to deal with the game’s baffling search system that has you crossing three subjects related to what you’re looking for before it decides to reveal whatever bread crumb is next on the trail. Once again, that’s yet another element lifted from The Sinking City, and one that didn’t work in that one either.

Then comes the combat. You get to engage with it early on in the story, when Holmes gains a commission from the local police district and is allowed to arrest people. So every now and then he pulls out a gun and gets to incapacitate bad guys by shooting off pieces of armor, bottles of explosives unexplainably tied to their necks, or their belts and hats for whatever reason.

It’s cumbersome, stiff, repetitive and not a whole lot of fun, but thankfully, unless they’re story points, you can choose not to engage with most of these encounters as they come in the form of optional bandit lairs marked on the map. You get coins for finishing these, and they are used to buy new clothes that Sherlock can use to disguise himself with, or even furniture to help rebuild his abandoned estate, which in turn helps him recall repressed childhood memories that play a part in the larger mystery surrounding his mother.

The aforementioned disguises are implemented in a rather comical way. The first instance where you get to use them is particularly silly, as Sherlock dresses the part in order to help a tailor whose shop has been burgled in sketching whoever did the deed for the police. Later on, switching outfits takes a more Hitman-ish purpose of gaining access to closed off locations, such as crime scenes, where a constable disguise comes in handy.

Technically, Sherlock Holmes: Chapter One is also a mess. This is Frogwares’ first next gen exclusive release but it doesn’t show. There’s pop up and dips in framerate everywhere you go, and the visuals don’t hold up at all, making this feel like an early PS4-era game at best. Not even the voice acting or music are particularly noteworthy, and the background characters — women especially — sound comically horrible, below amateurish.

Sherlock Holmes: Chapter One is an attempt by Frogwares to kick off a new more action-focused franchise with much younger protagonist, but if they hope to keep a captive audience around Frogwares ought to make the experience of stepping into Holmes’ shoes much more engaging and enjoyable than what’s presented in this game. There’s an expectation that comes with that character that is certainly not met in Sherlock Holmes: Chapter One, at all. Not only is it unimaginative, it’s almost a complete retread of the already criticized but overall superior The Sinking City, which albeit flawed still managed to capture some of the feel of its source material.