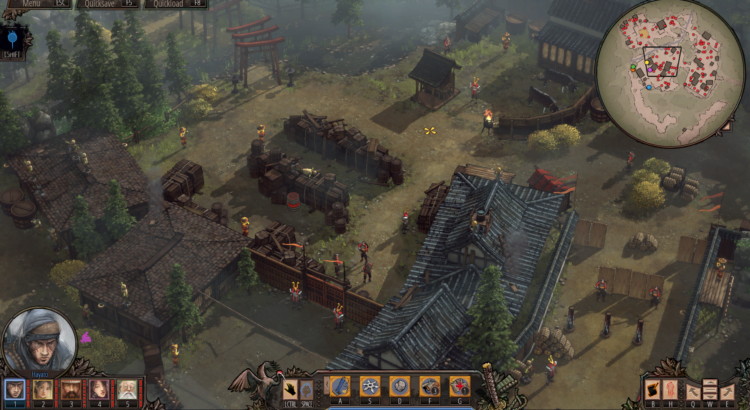 With the original Shadow Tactics, Mimimi Games pulled off one of the all-time great acts of gaming necromancy. Before 2016, the real-time stealth tactics genre had been dead for nearly a decade and it hadn’t died with honour. Shadow Tactics took the methodical style of gameplay that had been pioneered by Commandos: Behind Enemy Lines, transposed it into Edo period Japan and revitalised it in a host of wonderfully surprising ways. The game has fewer, more finely-balanced characters who each have a critical role to play in completing missions. The challenges are more open, varied, and responsive. Crucially, the game also has a compelling story into which the likeable personalities of the five heroes – Hayato, Yuki, Mugen, Takuma, and Aiko – are closely integrated.

An expansion to a game that is five years old is a very rare event, but happily that is what Mimimi Games have delivered. Having shipped the magnificent Desperados III in 2020, they had a chunk of spare time to use up before embarking on a major new project. They chose to produce Aiko’s Choice, a belated but hugely welcome standalone expansion for Shadow Tactics.

At this stage, there are three crucial things to make clear about the expansion. Firstly, due to the need to use an older version of Unity, Aiko’s Choice is unfortunately only available on PC. Secondly, while it is standalone and contains some brisk tutorial tips this is not well suited to players who are new to the Shadow Tactics world. The main missions are large and challenging – equivalent to the later stages of the original campaign – and they are slotted within the original game’s story in a way that won’t make sense to newcomers. Lastly, Aiko’s Choice is on a modest scale. There are three main missions which should take between two to three hours each to tackle, and three very brief “interludes” which serve mainly to advance the story.

As mentioned before, the missions here are inserted into the story of the main game. Our heroes, the “Blades” of the title, are at a crucial juncture in their bid to unmask and defeat the ruthless rebel leader known only as “Kage-sama”. Specifically, Aiko’s Choice is set prior to mission 9 of Shadow Tactics. The Blades are accosted by a new enemy, Lady Chiyo, who has a crucial role in Aiko’s past. The team must pause their main quest in order to confront this new threat, which serves as the narrative drive behind the six missions. Impressively, the story both satisfies as a miniature adventure for Aiko and friends, and adds new details and context to the main game. The characters have always been a key strength of Shadow Tactics, and in Aiko’s Choice players will spend more quality time with them and learn more about them than ever before – particularly kunoichi Aiko and her samurai lover Mugen.

With the main missions, Mimimi Games have crafted new challenges that are just as satisfying as the story. The first mission is set in the ostensibly friendly city of Nagoya, and provides a new perspective on the Blades’ headquarters. The second main mission features a set of islands. Aiko, the gruff ninja Hayato and the wide-eyed thief Yuki can exploit their ability to swim by striking from numerous directions at the enemy sentries. Mugen and aged sharpshooter Takuma can’t do this, however, and this conundrum will have the brains of Shadow Tactics veterans buzzing with thrilling tactical considerations. The last main mission is more inventive still, a sprawling camp stuffed with exploitable death traps and hidden passageways.

The core gameplay of Shadow Tactics is as brilliantly satisfying as ever. Finding ways to solve problems through deft use of the five likeable characters simply never gets old. Better still, setting up elaborate ambushes in which several guards can be eliminated without causing an alert is still completely gripping. The formula is so perfect, and the new missions so intricately designed, that the lack of any new skills or characters is a non-issue. Similarly, the lack of features pioneered by Desperados III – like the amazing post-mission recap – is ultimately an understandable and bearable omission.

Aiko’s Choice is a document of a developer at the top of their game, doing what they love to do. Fans of the original Shadow Tactics are sure to enjoy these new missions, particularly because of the way they expand upon and improve the main game. Currently, Mimimi Games are working on their next real-time stealth tactics game with the codename “Süßkartoffel” (or sweet potato in English). Before Shadow Tactics was released, the company nearly went bankrupt – now able to self-publish their next game, anything seems possible. In the meantime, Aiko’s Choice serves as a reminder of how enthralling real-time stealth tactics can be.

One thought to “Review: Our favourite assassins make a welcome return in Shadow Tactics: Blades of the Shogun – Aiko’s Choice”