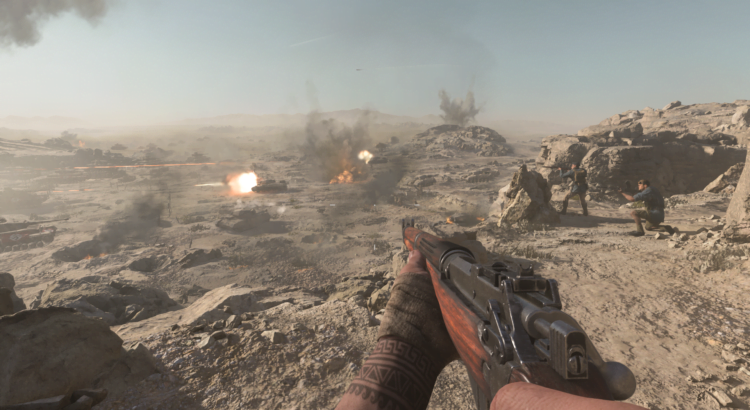 Call of Duty: Vanguard begins on a train, which is an almost comically appropriate metaphor for the game itself. Vanguard is an impressive, fast-moving, and well-oiled machine which offers very little freedom of movement and almost always travels in a dead-straight line. Unlike a train though, it isn’t very long.

The Call of Duty series is fast approaching its 20th anniversary and this latest annual entry is the 18th game in the multi-billion dollar blockbuster franchise. A large segment of the audience for Vanguard wasn’t even born when the original game was released in 2003; millions of players have literally grown up with this series. Expectations for each game are intense, and this latest instalment is a somewhat awkward package which reflects the struggle to meet those demands. Once again, Vanguard is mostly more of the same, likely to leave the established audience broadly satisfied while being unlikely to win over new fans.

Sledgehammer Games last headlined Call of Duty: WWII back in 2017, but Vanguard explores a somewhat novel take on the same conflict. The game takes its name from a unique, multinational special forces unit established while Nazi Germany is about to collapse. Composed of various British, American, Australian, and Soviet hardcases the unit is tasked with foiling a Reich scheme with the rather obvious title “Project Phoenix”. However, most of the campaign actually consists of flashbacks which focus on formative experiences for our heroes earlier in the war.

This narrative is enlivened by some fairly well-written cutscenes which are extremely impressive on a technical level, especially when they merge near-seamlessly with gameplay. The flashback missions provide a means to explore various theatres of World War II. Sledgehammer Games haven’t been particularly original in their choice of scenarios. Team leader Kingsley drops into France on the eve of D-Day, and Soviet sniper Petrova fights in the shattered streets of Stalingrad.

These locations have been done to death in War World II shooters over the years, and the missions in the Pacific and North Africa are only slightly fresher. The playable characters each have a special power of sorts, but these feel undercooked and only minimally useful. The brash Aussie soldier Riggs has a flair for explosives, for example, while the similarly brash American pilot Jackson has a “focus” mode which facilitates successions of jungle takedowns. As an attempt to differentiate the characters, it falls flat.

Throughout the campaign, Vanguard employs the traditional Call of Duty tradeoff – the missions are absolutely spectacular from beginning to end, but at the cost of freedom and interactivity. In 1942, Stalin issued Order No. 227 which dictated “not a step back!” In 2021, Sledgehammer Games issued Order CoD No. 18, which rarely even allows a step left or right. The game yanks the player by the nose through its admittedly stunning setpieces. This is not new and will be familiar to Call of Duty veterans but Vanguard is as much an “interactive movie” as something like Phantasmagoria was in the heady days of 1995. The player is given some flexibility very occasionally. A Stalingrad shootout in which Petrova scurries around a sprawling post office eliminating German troops is a breath of fresh air, but these occasions are few and far between. Only one mission is a real dud – fighting the Battle of Midway as Jackson must have sounded good on paper, and does look spectacular. Unfortunately, the flight controls are awful and ironically, piloting a fighter plane affords even less freedom than on-foot missions.

The campaign can be dispensed with in something like five to six hours and clearly isn’t worth the game’s hefty asking price by itself. As an appetiser for the game’s multiplayer, though, it is undeniably fun to experience despite its sometimes almost absurdly restrictive structure. It helps that Vanguard’s visuals are consistently stellar, with fantastic lighting, character models, environmental design, and particle effects. The game’s emphasis on characters – albeit at the expense of a compelling plot – is also admirable. The diverse cast, focus on confronting racism, and some quieter and more humane moments are all welcome.

On the multiplayer front, Vanguard comes with all the myriad modes, labyrinthine progression systems, and unlockables that fans of the series have come to expect. The sheer complexity of all this can be overwhelming for newcomers, however. Everything is tremendously slick and precision-tooled for maximum addictiveness and with a large player base, it is quick and easy to find games however specific your chosen filters. Perhaps the most welcome new addition is the “combat pacing” option. Applicable to all game modes, this essentially dictates player count – from the cosy tactical mode (up to 16 players), through the hectic assault mode (14 to 36 players), up to the potentially chaotic blitz mode (16 to 46 players). This is a strong idea from Sledgehammer, allowing players to select a scale and pace of combat that suits them.

Getting the most out of multiplayer is going to take some time, as the numerous unlockables will take many hours of grinding to acquire. Obtaining the “operators” (i.e. characters), which include the playable ones from the campaign, varies from trivial to almost a full-time job. The new instalment of the perennial zombies mode also requires patience, as it is somewhat undercooked and repetitive at launch but with more promised by the studio.

It’s a longstanding truism that annual games are not well-suited to innovation. They tend to make only small, incremental changes but even these can thrill or displease the loyal year-on-year purchasers. Vanguard is exactly that kind of game in exactly that kind of series. What it does have is the extremely high production standards and level of polish that Call of Duty is known for these days. This looks and plays every bit like a game which cost many, many millions of dollars to develop. If you have ever enjoyed a Call of Duty game you will enjoy this one, too, and can expect to be kept busy until the next edition. 18 games in, that is about all we can expect.

What we should be able to expect is a radical and comprehensive change of culture at publisher Activision Blizzard. As has been covered extensively elsewhere, the company has recently been at the centre of a wave of deeply disturbing allegations. A picture has emerged of a thoroughly rotten workplace culture dating back years, and a leadership team failing to treat hundreds of harassment allegations with the due seriousness. There have been investigations by the State of California and U.S. Securities and Exchange Commission, as well as multiple staff walkouts. As Call of Duty: Vanguard is developed by an Activision Blizzard subsidiary and published by the company, Entertainium takes this opportunity to make clear our firm support for the employees who are campaigning for the much-needed and long-overdue transformation of the workplace culture.