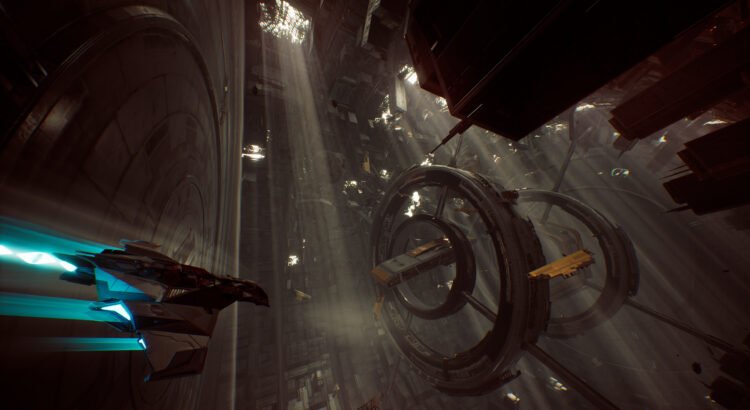 Chorus had me the second I got access to Trance Drift.

Trance Drift is a skill that lets you quickly turn and realign yourself without losing the momentum you’ve built up. So, say you’ve got a small group of enemy ships flying straight toward you. In most other flight combat games, you’d have to try and get behind them with a loop maneuver and hope you’re fast enough to get some shots off. Here, you just charge straight at them, active Trance Drift, and immediately turn around and start blasting.

It makes combat much faster and fluid because I’m spending less time trying to get in position and more time enjoying the rhythm and pace of battle, as well as making traversal more fun because I can more easily navigate any enclosed space and generally pull off some slick maneuvers all the while. It’s one of the core aspects of Chorus that makes its flight and combat shine.

Until that point, Chorus was… fine. Pretty standard space shooter with about everything that entails: Fly around and take on jobs, fight off the occasional group of space pirates, maybe retrieve some lost cargo every now and then, and so on. Everything felt good and I was enjoying it well enough, but it hadn’t really hooked me. But once I got access to Trance Drift and the abilities that followed, I was in.

Chorus is an arcade-style space shooter from developer Fishlabs. The game follows Nara, a former high-ranking member of a cult known as The Circle, a group that has been steadily taking control of the galaxy, who defected from said cult several years ago and is now trying to destroy it. She’s joined by her ship and its sentient AI Forsaken (“Forsa” for short), the two of them eager to eradicate every last cult member they come across. The story is a pretty standard redemption tale, Nara frequently grappling with how to square her actions as part of the cult and who she is now. There’s some intrigue regarding some of the specific aspects of the game’s world — the “void” and the forces that exist within it, for instance — but a lot of the story is just okay at best.

In addition to Trance Drift, Nara has selection of abilities called “rites” that grant a massive advantage in combat, ranging from a sudden burst of energy that stuns enemies and disables their shields, one that lets you teleport directly behind whoever you’re targeting, to merely surging forward at extremely high speed to damage or outright destroy whatever lies before you. Any one of these on their own is already a huge plus; having all of them at your disposal whenever you like? It almost feels unfair. At least until you see the sorts of odds and variety of foes you’re pitted against, at which point they feel necessary to properly level the playing field.

Chorus isn’t a terribly difficult game — even in the most intense battles, the game always feels manageable — but it does become very busy. Expected since combat in zero-g is inherently difficult, what with all the different angles you can be attacked from, but with the rites at your side, it’s pretty easy to keep things under control. Battles that would otherwise be a constant struggle to keep up with as you try and maneuver around the hail of gunfire trying to cover different angles are instead cleared with ruthless efficiency. Charge right through a cluster of enemy ships then immediately Trance Drift to turn around and get some shots in on the rest. Teleport to one a little ways out to take it down then disable another one or two nearby and finish them off. These abilities have an energy cost to keep you from just spamming them endlessly, of course, but that’s hardly a problem with how quickly energy regenerates and how easily you can get more.

What’s particularly fun is how they can completely subvert how you would have to fight some enemies entirely. One type in particular, an armored ship with shields that protect everything but its backside, is a perfect example. First time you encounter one, you have to boost right at it and use Trance Drift to quickly turn around and fire at its weak point. It’s tricky, but a good demonstration of what you can do with that particular ability since trying to do that without it would be painful. Once you get more rites, however, you can just teleport right behind it, stun it, and open fire, destroying it in seconds.

The ways you can use your abilities to end fights as quickly as they begin never gets old. Every time a fight occurs, I welcome it. There’s a speed and efficiency to it that makes even the smallest skirmishes fun to partake in. The range of abilities you can use plays no small part in that, but it’s mainly just how good it feels to move around and how the degree of control you have enables you to perform all sorts of wild moves. Arcade-style space shooters of this style aren’t as common these days as the games hew toward simulation with regard to flight, which makes Chorus all the more welcome a surprise.