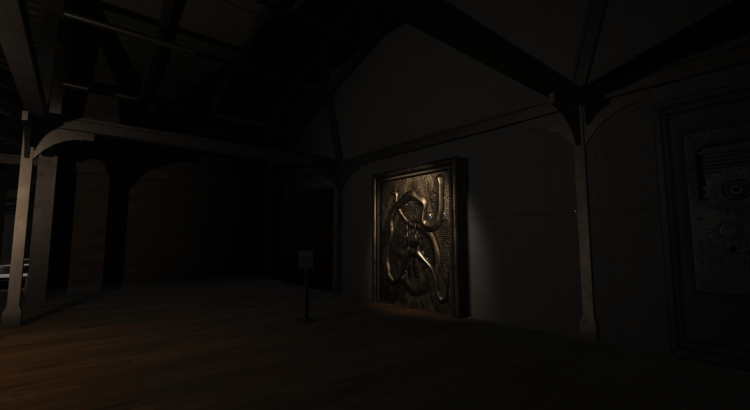 Videogames have a bad track record when it comes to archiving its history. Countless games have been lost to time as a result of companies discarding source code and many more are only accessible via emulation of copies obtained through piracy due either to tangled copyright/ownership issues that are impossible to navigate or a general refusal to even think about re-releasing them. That so much culture isn’t readily accessible is an embarrassment for the medium. There’s so much history that’s largely forgotten and buried.

Museum of Mechanics: Lockpicking is in some ways a small step to fixing that. Developed by Dim Bulb Games, makers of the absolutely phenomenal Where the Water Tastes Like Wine, Museum of Mechanics is a game that seeks to provide an easy reference point of how games have tackled specific ideas over the years via facsimiles that recreate the original articles just enough to get a broad sense for how each one worked in their respective games. Its primary audience is developers looking to have an easy reference point when creating their own take on a particular idea, but it’s also a fantastic resource for anyone interested in understanding how certain mechanics have been tackled over the years.

This particular edition of Museum of Mechanics (assuming there ever is more) focuses on lockpicking. It takes examples from all over, including: the Thief series, Deus Ex, the Mass Effect series, the Fallout and Elder Scrolls series’, Pathologic 2, Dust: An Elysian Tale, Alpha Protocol, Wizardry 6, Splinter Cell, and even Dungeons and Dragons. It’s a large spread of games over a wide period of time, separated by genre (role-playing games, immersive sims, and an assortment of examples from various genres). Each entry is accompanied by a brief history of the game, an explanation of its mechanics, and a brief analysis of the design.

The recreations of each lockpicking minigame are pretty primitive visually, but the functionality is there. They’re faithful recreations, the art capturing just enough to look at and say, “yep, that’s definitely [insert game here].” I haven’t touched too many of the games chosen for this curation, but the minigames from the games I have played definitely feel close enough to the original works to be a good reference point, the rest good enough to understand how they worked and why. The brief history and design analysis is useful for helping place each one in proper context — the ways in which early RPGs attempts at lockpicking were based off DnD-style dice rolls, for instance, as that was an easy example to draw from — and see the little ways design trends shift and change over time.

In the days of character-skill systems, for instance, games had to think of ways to keep the player from brute forcing their way through locks since there’s nothing to inherently stop or discourage that behavior. The early Fallout games, which used dice rolls based on character skills to determine success or failure, came up with the solution to cause failed attempts to jam the lock for a day, making it impossible for someone to just keep trying until the dice roll ends up in their favor. Contrast this against the lockpicking minigame Bethesda uses in their Fallout games and Skyrim where the locks can always be picked with enough lockpicks, skill, and patience, the character skills only making it easier and less costly to tackle more difficult locks. It effectively sidesteps the problems inherent to character-skill systems because it allows the player to try as many times as they like, but also provides the means to make the harder locks easier as long as they choose to invest in that particular skill.

Likewise, immersive sims like Thief and Deus Ex started with rather straightforward cases of “just use an item until the progress bar fills/empties” that were simple but didn’t really provide much player involvement. Depending on the game, it was at most a resource-check (do you have enough lockpicks or not) with the possible friction of creating noise or making you vulnerable by being stuck in the open while you wait for the door to open. Later they started to move toward actual minigames that try to replicate the act of lockpicking directly in some form — or hacking minigames that serve the same function as a lockpick in cases where locks are electronic or computerized, illustrating the ways disparate ideas and mechanics can intersect.

It’s the sort of insights that arise from being able to easily compare and contrast different takes on an idea. Before you’d either have to do the work yourself of tracking down each game and taking notes or wait for someone else to do the work and read their findings, but now you could just do it yourself directly. Being able to see and feel how so many games’ takes differ, the ways they build off each other or move in wildly different directions is fascinating. Museum of Mechanics makes it easier to do that kind of work for those who want to while also presenting its own conclusions for those who just want to see a developer’s own takeaways.

Museum of Mechanics: Lockpicking is an astounding work. It’s such a good idea that’s almost kinda frustrating that there hasn’t already been dozens of projects like this already covering all manner of mechanics and general game design. But that even one example exists is better than none at all. Being able to directly play with mechanics instead of just reading about or watching a demonstration of them is such a smart way to present them, especially alongside commentary to further enhance one’s understanding after playing. If Museum of Mechanics doesn’t continue, I hope it at least inspires similar ideas.