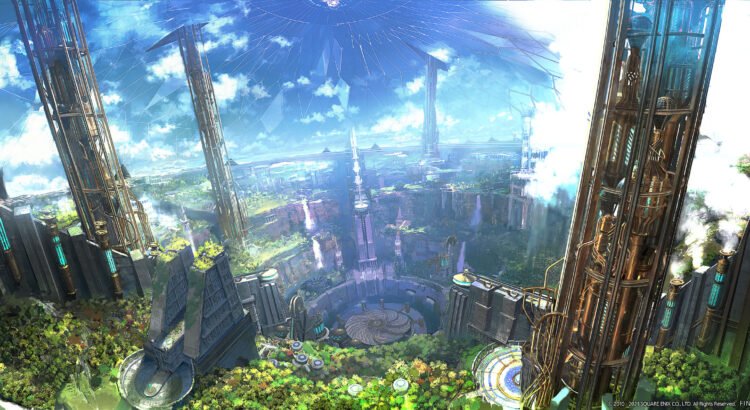 Final Fantasy XIV is on the brink of destruction as its newest expansion, Endwalker, opens up. An eons-old prophecy of apocalyptic proportions approaches its star of Etheirys, home to (almost) all of your adventures so far. Endwalker takes us across the world, out to the stars and even through time in order to try and put a stop to it. This is Final Fantasy XIV’s biggest expansion to date and it could very much be the best one so far.

Previous expansions to the game were huge in their own right, with the last one prior to Endwalker, Shadowbringers, even having players travel to another dimension in order to right the wrongs of the so-called villains of that realm, the Heroes of (gasp!) Light, but Endwalker really ups the ante by putting the fate of the world in balance. To all accounts, it could be the very last expansion to Final Fantasy XIV, and all things considered, I would be totally fine with that for a number of reasons.

The new regions introduced in this new expansion start out with locations that have been amply named through the story of the game, starting with Sharlayan, home of the twins Alphinaud and Alisae, members of your Sions of the Seventh Dawn, a bastion of knowledge with a strict non-involvement policy in regards to worldly affairs. Then there’s Garlemand, the home of the big bad empire, now lain in ruins due to the coming cataclysm, where your trope ends up embarking in in hope of saving what’s left of its population. You even go to the moon, for crying out loud!

Endwalker is as excellent as ever when it comes to story, too. In fact, it delivers the best of Final Fantasy XIV outside of the comically genius Hildibrand saga involving the antics of lovably clumsy undead detective. It continues to humanize and deliver background to the Ascians, the main catalysts for the events of the game as a whole, which has been a ongoing theme for a few years now. It goes as far as spending a sizeable portion of the expansion having you look into what eventually became the twisted motivations behind dastardly cloaked figures such as Emet-Selch, Elidibus and even Lahabrea, something that any fan of Final Fantasy XIV’s lore is sure to appreciate.

Really, the character development in this new content is top notch. Even new ones that are brought in for the first time now get a ton of evolution by the end, and might even manage to become some of your favorites. Even my man Estinien, the elven dragoon from Heavensward gets his due in Endwalker. Some moments, however, might prove to be too deep of cuts in the canon if you haven’t been keeping up, so if you run into situations you can’t seem to recall off the top of your head it’s worth looking those characters up as even their journey sees a satisfying conclusion during Endwalker. It’s impressive to see the effort that the development team’s gone through in order to tie things up, making it worth being around playing for the last ten years.

So it’s a shame that so much of the actual playing of this expansion is such a mixed experience. The quest design in Endwalker is its weakest aspect since it basically has you running around in order to talk to different people, or undertaking the dreaded MMO staple of ‘kill X’, and worst of all, the new quests formats introduced are a pain to complete, such as the forced stealth segments that insta-fail you in case you aren’t behind cover when your target turns around. On the other hand, the new dungeons and raid fights are some of the most beautiful and challenging you’re likely to find in this game which help sweeten the bitter pill somewhat.

The new classes added in Endwalker are also cause for celebration. The Reaper is probably the most approachable of the two, with its balance between saving up energy and releasing it for your avatar of death to consume and unleash destruction upon your enemies. As a melee DPS,  Reaper is a lot of fun once you manage to learn all of its skills which, similarly to previous new jobs and classes, are all given to you at once when you start out at level 70. Unlike other expansions, though, Endwalker tries to ease you into rotation by having you lightly practice it during each one of the new classes’ starting quest in form of a combat trial, but it’ll still take some patience on your part to read through and know what each of the many skills are useful for.

That’s especially so when it comes to the newcomer healer Sage. I had a lot of trouble adjusting to its otherwise incredibly cool mixture of offensive and defensive abilities that are used to buff, heal, and provide shields to your party. Out of the two, the Sage is easily the most complex and requires you to keep on your toes at all times at least until you get in with its rotation. I definitely want to put in the time to learn it, though, as it looks absolutely awesome when it’s all said and done, so I’ll be catching up on some much needed research online on YouTube before putting a poor random group through the grinder.

Regardless of the issues I’ve had with how the questing is, I feel that Endwalker is overall an excellent expansion to Final Fantasy XIV. The main strength of the game as a whole is its story, one of the best among the series easily, and even though the way quest progression is dealt might be getting a little long on the tooth, the content itself is incredible and the places you go to are beautiful and full of things to discover.

While I would’ve preferred less filler in the 50 or so hours I’ve spent so far in Endwalker, I can appreciate the direction Final Fantasy XIV’s been taken in since its miraculous re-invention in A Realm Reborn. It’s exciting to think what’s next for the game and I’m glad it won’t take too long to find out as the new content patch is bound to hit servers very soon, adding the fan favorite beast tribe quests and a continuation of the main story questline.