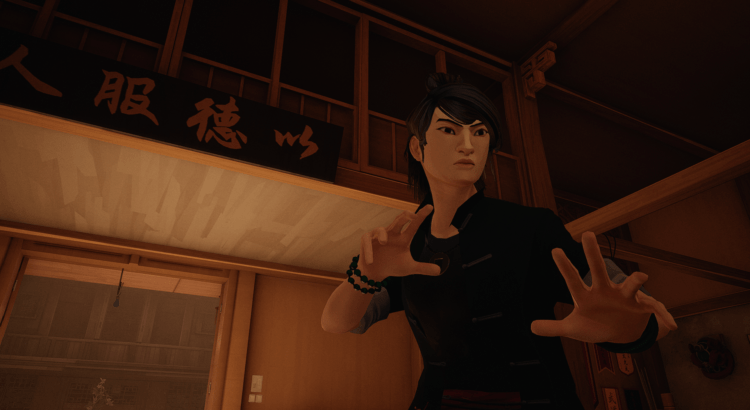 Early on in Sifu, the player character opens a door and faces a long hallway packed with a dozen thugs. When the inevitable first punch is thrown, the camera switches to a side-on perspective that recalls the brawlers of old, like Streets of Rage. First time around, the fight is thrilling but the victory is messy and hard-won. Through numerous replays, this gradually changes. Eventually, with skills honed by practice, the player will cut through the same dozen thugs with a graceful and savage precision, deflecting their every attempt to respond and pummelling them with a succession of combos, throws, and takedowns. The player will step over their groaning, defeated enemies and out of the hallway, pushing on to the greater challenges still to come.

With this single-player action game, French developer Sloclap has achieved a breakthrough in the presentation of martial arts in video games. Set within a vibrant and painterly take on contemporary China, the game is packed with electrifying and varied fights that transform players into the star of their own kung fu film. Sifu‘s structure is that of a hard road of improvement, from talented rookie to formidable master. Completing the story requires much replaying of the same levels, but the masterstroke is that this repetition doesn’t feel like a chore, but like a continual learning process. While some may wish for a more in-depth narrative or some additional modes, Sifu is a tremendously engaging and impressive brawler which raises the bar for hand-to-hand combat.

The game has a simple story steeped in the tropes of classic Hong Kong martial arts movies. Its protagonist is a martial artist – identified only as “boy” or “girl” – out to avenge the murder of their master eight years earlier. The five killers have since gone their separate ways; Fajar is the botanist for a drug ring, for example, while Jinfeng runs a powerful corporation. Each of the game’s five levels is the lair for one of these formidable bosses, populated by their respective armies of thugs and enforcers. At first glance, the structure of Sifu is simple. The player must tackle these stages in sequence, from “The Squats” to “The Sanctuary”, defeat the bosses, and so secure vengeance.

In fact, Sifu is only deceptively simple. Each stage comprises a number of branching paths, shortcuts, and optional encounters with their own rewards. Points of interest are recorded on an investigation board at the protagonist’s “wuguan”, or home base. In some cases, objects or intel recovered in one zone will unlock new strategies in another. Environments that begin as a linear sequence of escalating fights evolve, over revisits, into miniature worlds of their own. The environmental design and art direction are superb. Each stage has a unique layout, atmosphere, and time of day and each is connected to an element of the wuxing or “Five Phases” in traditional Chinese thought. “The Museum”, for example, is a circular modernist structure visited in the evening and associated with water. Each level warps in surprising ways as its climactic showdown draws near, here influenced by the water element and the psychology of the blade-using boss Kuriko.

As impressive as the locations are, they are ultimately mere stages for the beating heart of Sifu: its wonderful and absolutely blistering hand-to-hand combat. Thrilling to play at every stage of a player’s development, the fighting system is extensively motion-captured and based on bak mei, an explosively powerful Southern Chinese style. The basic framework of the fighting will be familiar to anyone who has played the Batman: Arkham games but Sifu takes brawls to a new level of graceful and brutal sophistication.

Whether involving a single henchman, a gang of armed corporate thugs, or a boss, each fight has its own distinct personality. Enemy type, weapons, locations, and moves used all influence the unique flow and outcome of an encounter. There are no identical fights here, no one tactic that will solve every problem. Success means truly engaging with Sloclap’s system of strikes, combos, counters, throws, evasion moves, and all the myriad subtleties of the enemies and bosses. That requires real patience but the rewards are great because every fight is a joy to play and a thrill to conquer. At its frequent best, Sifu has players choreographing their own glorious action movie with themselves as the star, with all the fluidity and drama that implies. Fighting in Sifu is simply fantastic.

It is also difficult. Make no mistake: achieving vengeance on the five killers is a stern challenge and the game lacks difficulty settings altogether. Before certain shortcuts are discovered and while the player’s skills are still developing, locations like “The Club” can seem like insurmountable ordeals. Players will die many, many times but Sloclap has factored this in. Thanks to a magic pendant, the protagonist abruptly resurrects upon death at the cost of advancing in age. The number of years added is equal to the current death count, and the pendant can only work so many times.

The older a character is, the harder they hit. At the same time, ageing also causes the player’s health bar to shorten. Here again, Sifu emphasises mastery: it takes real skill to exploit the greater damage potential of a greying fighter, while also being agile enough to stay alive. While this clever mechanic isn’t quite as impactful as the marketing implied, it is a key way Sifu sustains interest over multiple replays. Inevitably, hardcore players will soon share breathtaking runs in which they dominate the whole game and achieve vengeance while never passing the tender starting age of 20.

Sifu is a superbly polished brawler with a spectacular fighting system, a clever ageing mechanic and excellent stylised visuals. It may not be for everyone, however. Players looking for a continually fresh experience may dislike the extent to which the game emphasises replaying the same levels, even ones which open up and change over time. The game’s high difficulty and fairly steep learning curve may also be a cause for caution. Those who enjoy a challenge will definitely find one here, as Sifu continually raises the stakes. Bosses and large groups of armed, elite enemies will test everything a fighter has learned and can be frustrating, but victory is hugely satisfying.

What it boils down to is that after a gruelling struggle in a seedy club or a surreal art exhibition, players will look over the scene of destruction, take a breath, and feel like a kung fu master. For Sloclap and Sifu, that means mission accomplished.