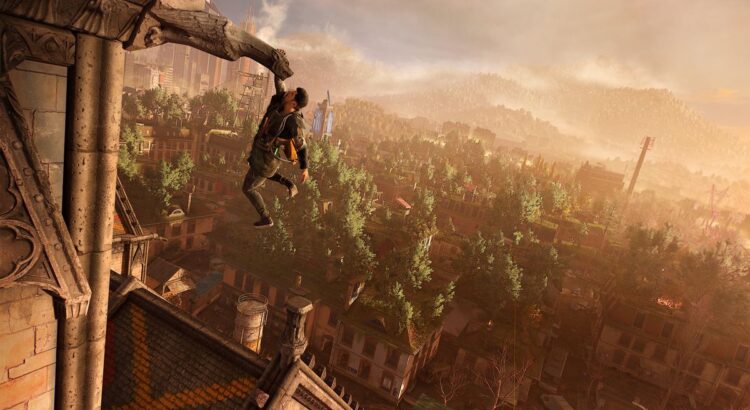 Back during what was unbeknownst to everyone the very last E3 that would take place for quite a while, a few months before the pandemic hit, we got to sit down and see a little of the then newly announced Dying Light sequel. What Techland showed proved to be very promising in both scale and possibilities, a game where your choices really mattered and served to radically change the way you played it.

Almost three years after the fact, Dying Light 2 is finally out, and unsurprisingly, a lot of the grandiose promises made during that preview event didn’t quite come true. The new first-person open-world zombie masher is as of a breakthrough as a pillow hitting a wall but even so it still manages to be a good time. A very, very silly good time with little to no repercussion to the decisions you make, and definitely none of the groundbreaking consequences that were seen in previews in 2019.

In Dying Light 2’s world it’s been almost two decades since the events of the first game, where an entire city was walled off in order to contain a deadly virus that turned humans into flesh eaters. Unfortunately, the folks behind that chemical attack kept working on the formula, and it obviously got out again and into the world. It’s all gone the way of the dodo, except for a handful of settlements that somehow still make living possible.

As a Pilgrim, a sort of courier jack-of-all-trades type outcast, you eventually find your way into one of these last bastions of human civilization in the hope of finding clues about your long lost sister, and the truth behind the experiments you supposedly went through as a kid. It doesn’t take long before you become involved with the local factions and their drama, not to mention a whole bunch of jumping around doing all manner of activities throughout a fairly big map.

At the outset, there’s not a whole lot you can do other than jump and climb over stuff, but as you level up things really start to get fun in Dying Light 2. The two skill branches, combat and stamina, reward you with some insane abilities that make both the traversal and fighting in the game very enjoyable, even if the latter doesn’t come close to just how cool it is to just simply explore the city.

In fact, the main draw I found to keep playing Dying Light 2 was indeed the exploration of Villedor, a fictionalized European city that’s been isolated from the rest of the world. Its denizens are all infected by the aforementioned disease, which is also contracted by the protagonist at the beginning of the game. Similarly to the first Dying Light, moving about at night is incredibly dangerous because that’s when the biggest baddies come out to play, leaving the goodies indoors undefended making night time a big risk and reward playground.

The biggest difference, however, is that the more time you spend in the dark, the faster your immunity drops, so there’s always a timer ticking down that forces you to find patches of UV light in order to keep you from turning. Luckily, you can slow that process down by chomping down on some hilariously named UV Shrooms or immunity pills, which are crafted from a host of items you come across during your exploration.

Admittedly, I kept myself from playing the game at night when I first started the original Dying Light due to how helpless it felt to fumble around in the dark, but the more I played its sequel, the more I preferred going out and exploring when the sun came down. Yeah, for the first couple of hours it was a pain to get my bearings and surviving the chases that start out whenever those pesky howlers caught wind of me, until I both learned the tricks to surviving – running like hell, really – and leveled up a bit until the timer felt comfortable enough to deal with.

It also helps that the map becomes way more vertically oriented the further you get into the game. At the outset, the part of the game where the story starts, Old Villedor, is full of short buildings that don’t demand a lot of planning when climbing them, but once you get to downtown and its skyscrapers, Dying Light 2 opens up and just teases you to try and find ways to the top of every single one of them, rewarding you for your cleverness with lovely vistas and of course, loot.

Like most open-world games, including the original, Dying Light 2 has a lot to do besides its story. There are a bunch of activities you can partake in that will reward you with skill points that definitely come in handy to making it ever more fun to explore, even if a lot of them eventually boil down to repetition. It was reported that Techland claimed that the game would last you over 500 hours and I certainly don’t doubt them, but with over 30 under my belt, I feel like I’m done with the game having completed the story and done at least three times each of the mission types that there are to be done.

Even though I dug the parkour element in the game a whole bunch, it can still be very janky at times. No two jumps are ever the same once you start to layer on the different climbing techniques required for particularly tricky situations, which can lead to some frustration in moments when you were damn sure you nailed a move only to kiss the pavement 100 stories down hard.

The checkpointing is all over the place in the game, too, which is a shame, having the potential to add to your annoyance with the game. During actual missions it works wonderfully well, but if you happen to be simply trying to unlock random things on the map and happen to die, you might find yourself at the other end of the city once you respawn, forcing you to run up to wherever you were before to try again.

One of the most distinguishing features that Techland introduced back in Dead Island, the customization of weapons, is somewhat played down in this game. You’re limited to picking up and upgrading blueprints to some elemental damage bonuses to the weapons you buy or find in the world, but there’s no way to actually cobble together your own. Due to the sheer amount of materials required to make even the simplest upgrade suitably powerful, not to mention how quickly stuff breaks from use in Dying Light 2, there’s no real incentive to keep leveling these up if you’re just bound to lose them eventually.

There are also a number of bugs to be found all throughout Dying Light 2. I ran across a bunch of them during the course of my playthrough on Xbox Series S. Issues range from crashes to desktop during cutscenes, scripting to break, preventing you from continuing on with quests, to characters and items simply refusing to load in that result  in some unintentionally funny moments. One in particular had me in tears where an important NPC was hurt and was being brought over an improvised stretcher in the form of a door, but other than that door, nothing else was loaded into the scene, resulting in a floating green flat rectangle zipping across the screen in front of me.

It’s expected for an open-world game such as this to be somewhat buggy, but Dying Light 2 takes the cake when it comes to feeling like it’s being held together with scotch tape and bubble gum. But even as broken as it can be at times, it can still be quite enjoyable if you’re looking for something brainless to play. Much like last year’s Far Cry 6, Dying Light 2 is short on quality when it comes to writing, while having loads to do regardless of the shallow characters shouting orders all around you and the lack of real consequences for the choices you make.

The disappointment with the resulting game when compared to the promises made years ago at E3 helps accentuate the climate within Techland’s internal policies that were brought to light by a report, showing that upper management was far from perfect, in fact, awful. Company leaders’ feedback to the developers’ work in the game, especially, was put into question, not to mention the overall toxic work environment and questionable administrative decisions by its heads.

Dying Light 2 is the equivalent of a videogame playground’s jungle jim where you can make your own fun jumping around, climbing to the very top and finding neat ways and far from safe ways to get back down. It’s by no means the most serious game you’ll play this year, but it might just be the most free form you’re likely to find in terms of exploration and organic discovery. Techland’s expanded on the foundation laid by the original Dying Light, and to a lesser extent Dead Island, with a game that will keep you busy for as long as you crave digging into it.